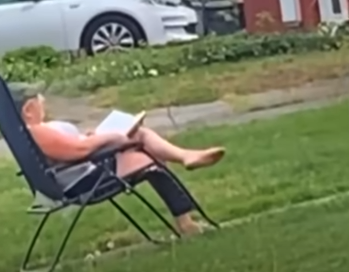 What better than relaxing in a camping chair on your front lawn with a good book on a nice, sunny day? A seemingly idyllic scene for many. Only that wasn't the case in this video which has gone viral.

A Maryland, US, woman allegedly set her house on fire with her house mates still inside and then sat and watched it go up in flames.

The shocking video which was filmed by her neighbour, Avery Hammond, shows the  woman having a heated argument with someone on the porch. Then another argument with another resident.

The next thing the house is on fire as the woman calmly sits in a lawn chair and watches it burn.

A bystander is then seen running to help a resident climb out a window of the house, which is engulfed in flames, before the fire brigade arrives on the scene.

The woman has been arrested.