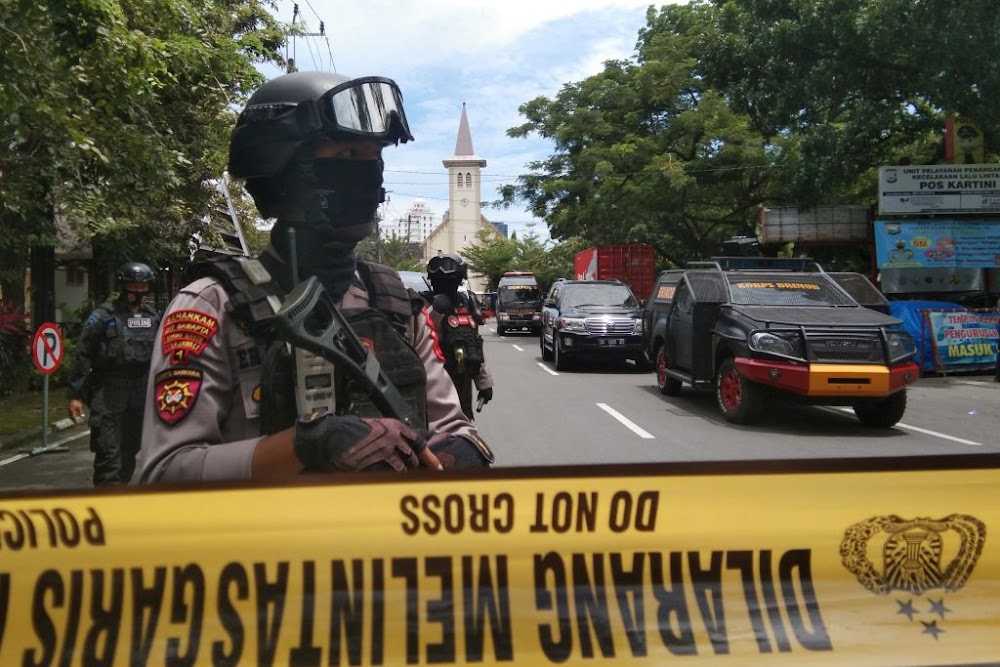 Two suspected suicide bombers attacked a Catholic church in the Indonesian city of Makassar on Sunday, wounding 14 people on the first day of the Easter Holy Week, officials said.

The congregation was concluding their mass inside the church on the island of Sulawesi when the attackers detonated at least one device outside, police said. The two suspects were the only fatalities.

“I strongly condemn this act of terrorism and I have ordered the police chief to thoroughly investigate the perpetrators' networks and tear down the networks to their roots,” President Joko Widodo said in an online broadcast following the attack.

Authorities were looking into which radical networks the bombers came from and whether the attack was linked to recent arrests of suspected militants, national police spokesperson Argo Yuwono said.

In January, a counter-terrorism unit raided a militant hideout in Makassar and killed two men suspected by police of involvement in twin bombings at a Philippine church in 2019 that killed more than 20 people.

Jokowi, as the president is widely known, urged people to remain calm and said everybody could worship “without fear”.

Father Wilhemus Tulak, a priest at the church, told Indonesian media that a suspected bomber tried to enter the church grounds on a motorbike, but had been stopped by a security guard.

Security camera footage showed a blast that blew flame, smoke and debris into the middle of the road.

Ansyaad Mbai, former chief of the National Counterterrorism Agency, said the perpetrators were likely part of the same group responsible for a bombing in Jolo, the Philippines, in 2020.

“They want to show that they still exist and use this to propagate their group and recruit new members,” he said.

Police blamed the Islamic State-inspired Jamaah Ansharut Daulah group for suicide attacks in 2018 on churches and a police post in the city of Surabaya that killed over 30 people.

Makassar, Sulawesi's biggest city, reflects the religious make-up of Indonesia, the world’s largest Muslim-majority country with a substantial Christian minority and followers of other religions.

“Whatever the motive is, this act isn't justified by any religion because it harms not just one person but others, too,” Yaqut Cholil Qoumas, Indonesia's religious affairs minister, said in a statement.

Gomar Gultom, head of the Indonesian Council of Churches, described the attack as a “cruel incident” as Christians were celebrating Palm Sunday, and urged people to remain calm and trust the authorities.

Indonesia's deadliest Islamist militant attack took place on the tourist island of Bali in 2002, when bombers killed 202 people, most of them foreign tourists.

In subsequent years, security forces in Indonesia scored some major successes in tackling militancy, but more recently there has been a resurgence of militant violence.