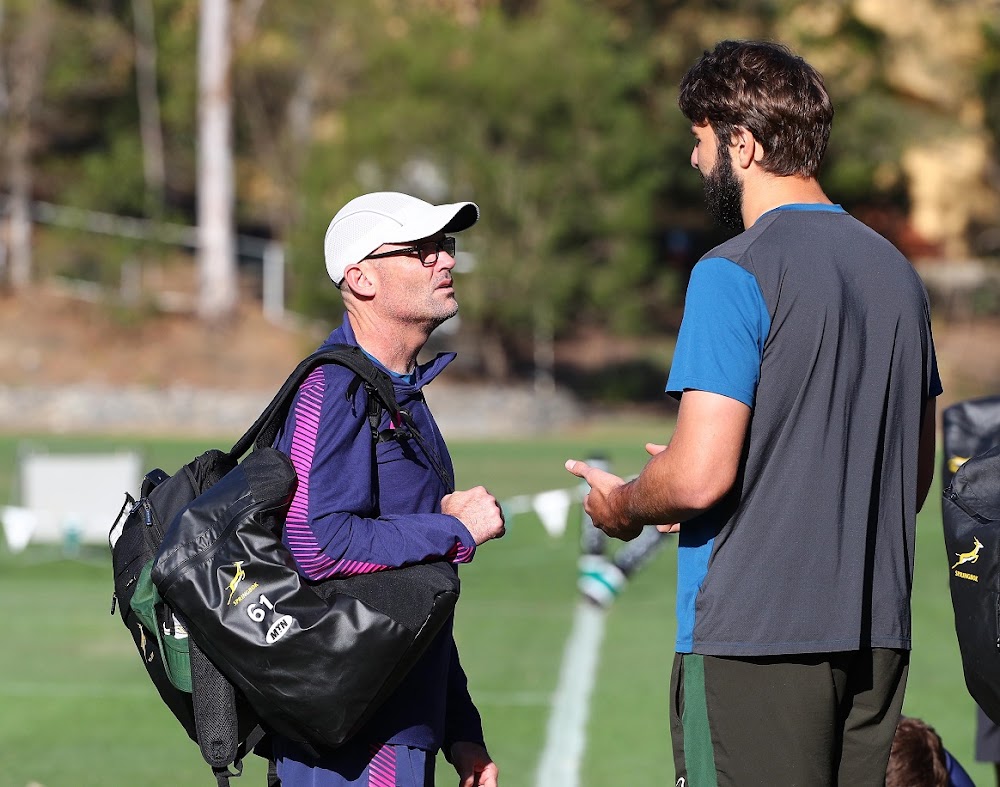 The few contentious calls in the Springboks' 28-26 defeat to the Wallabies last weekend were duly raised with World Rugby's officialdom.

Bok coach Jacques Neinaber, however, has expressed his satisfaction with their post-match clarification-seeking process with the game's governing body.

It is a far cry from the frustration the Boks felt in the wake of their first Test defeat to the British & Irish Lions that led to director of rugby Rassie Erasmus recording an hour-long chastening of the match officials.

Part of the frustration then was how the channels of communication operated but it would appear everybody now is on the same wavelength.

“We’ve got a framework that we work with now, which we probably didn’t know before,” said Nienaber in the build-up to Saturday's return clash against the Wallabies in Brisbane.

“It’s the same framework they used in the Six Nations, and obviously us not playing any rugby before the Georgia Test match, we weren’t 100% sure. We didn’t know what the process was.”

We didn’t know what the process was

As is customary, the Boks submitted their video clips the day after the match to Joel Jutge, World Rugby’s referees boss.

“They reviewed it and they came back to us. The purpose of that is to get alignment from our side,” Nienaber said.

The object of the exercise isn't so much finger-pointing as developing a greater understanding between lawmakers, those who enforce it, coaches and players. The process should allow teams to better comply with the laws in future.

“Everybody makes mistakes. We make mistakes, referees sometimes get things wrong, you can’t get everything right,” Nienaber noted.

Some of the feedback may have ramifications on team selection. “Let’s say a player conceded three penalties, and then the referee will come back and say that was maybe a 50-50 call that could have gone the other way,” said Nienaber.

“Or maybe he wasn’t offside or he didn’t transgress, or we could reward him there at the breakdown. That provides different perspectives on a player’s performance.

“Then obviously that will influence selection. You will look at a player and, say you conceded three but they came back and said two of those weren’t penalties, and that ‘play on’ would have been a better call. That’s what we want from coaches and our team’s point of view.”

To further smooth the process coaches meet match officials on the eve of the match to cultivate greater understanding of what is required.

“Not all referees are the same in terms of how they interpret the contest and what they would like to see in that contest,” said Nienaber.

“It’s something we just aligned again after the Test match. The feedback and work from them has been good, from Joel’s side and the referee’s side. There’s good alignment.”

This weekend's clash at Suncorp Stadium will be refereed by England's Matthew Carley.