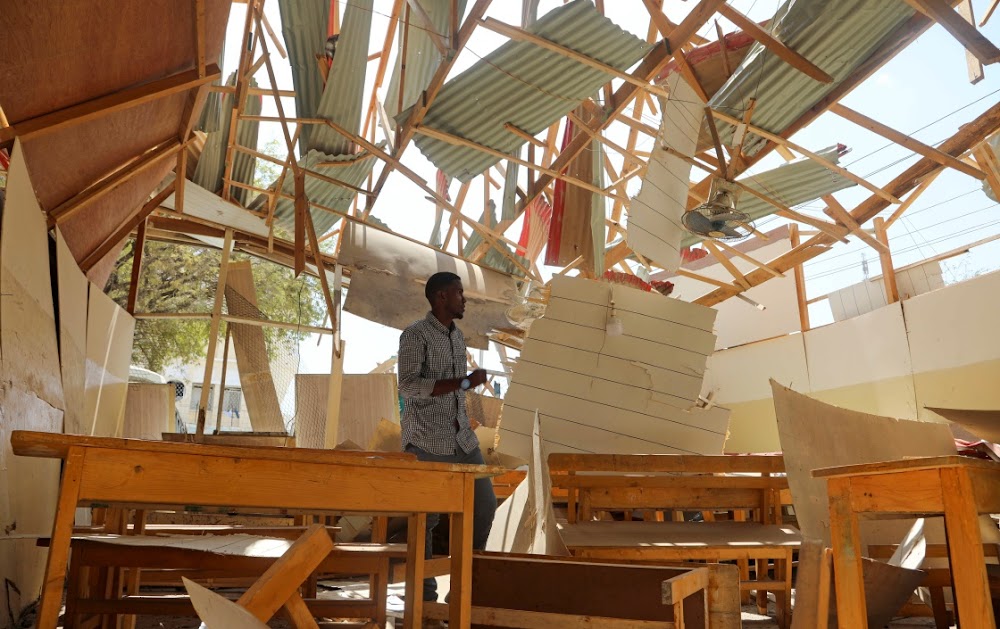 An Islamist suicide bombing outside a school in Somalia's capital killed eight people and wounded 17 including 13 children, the latest in a string of deadly blasts this year in a country beset by political turmoil and drought.

The bombing at around 7:30am was claimed by Al-Shabaab militants, who said they intended to strike a United Nations security convoy passing near the school.

A UN spokesperson in Mogadishu declined to comment. A staff member speaking on condition of anonymity said no international personnel from the UN were hurt but they had no information on whether Somali employees were hurt.

A column of smoke rose over the Mocaasir Primary and Secondary School, where classroom ceilings crashed onto students' desks, witnesses said.

“Schools — and any other place where children congregate — should at all times be safe for children,” Mohamed Malick Fall, regional director for Eastern and Southern Africa for UN children's fund Unicef, said in a statement.

Abdisalan Omar Ibrahim, 13, said the sound of the blast came as he was writing the heading of a history lesson his teacher had begun at the chalkboard.

The sound was followed by the screams of his classmates as parts of the building fell on them.

“A brick hit me in the head and blood was gushing onto my uniform,” he said.

He and the other injured students were taken to hospital and all but one were discharged.

“We were shaken by the blast pressure, then deafened by the gunfire that followed,” said Mohamed Hussein, a nurse at the nearby Osman Hospital, who was pulled from the rubble of a collapsed ceiling.

Video footage and photographs showed two walls of one classroom in pieces and a chalkboard with a scrawled sentence still intact. School buses and cars were blasted into heaps of metal.

Police spokesperson Abdifatah Aden Hassan told reporters that a suicide bomber in an SUV full of explosives had targeted the UN convoy.

The UN has many humanitarian and political staff in Mogadishu.

The Aamin Ambulance service evacuated at least 23 people injured in the blast, Abdikadir Abdirahman, director of the service, told Reuters.

Al-Shabaab has been fighting Somalia's central government for years, seeking to take power and impose its strict interpretation of Islam's sharia law.

In the past few months, the group has stepped up bomb and gun attacks in Mogadishu and elsewhere in its war against the Somalia military and the AU-mandated AMISOM force that helps protect the government.

A well-known Somali journalist was killed by an Al-Shabaab suicide bomber in Mogadishu on Saturday.

The latest attacks come amid political tensions over a long-delayed elections process and a worsening drought.

Aid group Save the Children said on Wednesday that nearly a quarter of Somalia’s population is struggling to feed itself due to the drought.