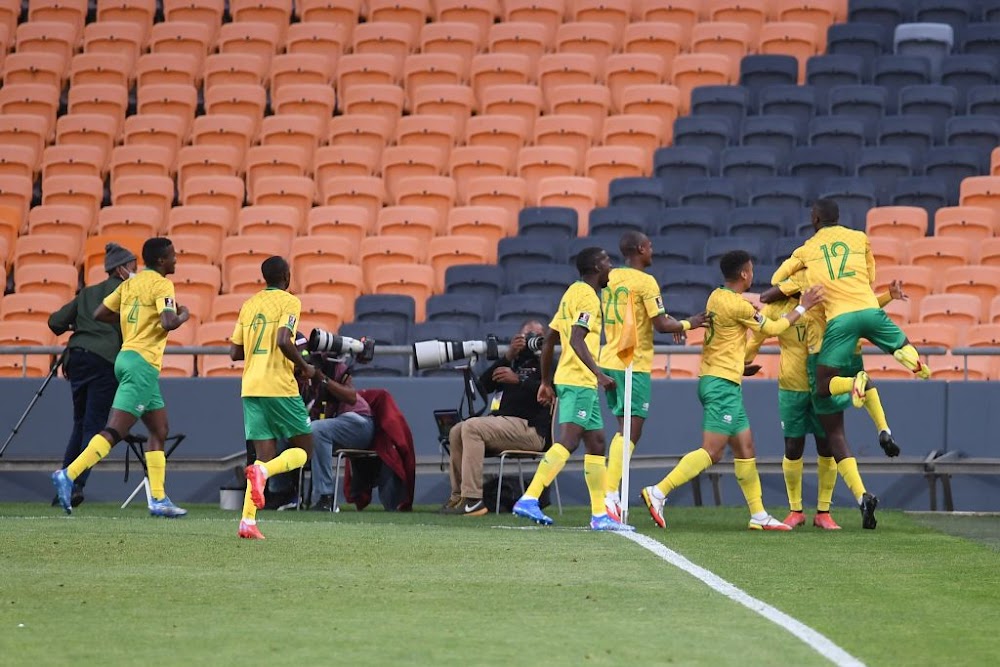 Bafana Bafana have significantly enhanced their chances of progressing to the final stages of the 2022 Fifa World Cup qualification with a hard-fought 1-0 win over Ethiopia at FNB Stadium on Tuesday night.

As a result of this much-needed win that was secured through a first-half own goal by Ethiopian skipper and striker Getaneh Kebede, South Africa remains top of Group G with 10 points from three successive wins and one draw.

During this qualification process, Bafana have impressively scored five goals and conceded only one. They now have their fate in their own hands in their remaining matches against Zimbabwe at home and Ghana away next month.

Bafana have a one-point advantage over second-placed Ghana who managed a narrow 1-0 win against the Warriors of Zimbabwe in the other match of the group, also on Tuesday, in Harare to leave this group wide open.

Zimbabwe and Ethiopia have been eliminated from the qualifiers, leaving Ghana and Bafana to battle it out for the top spot that comes with a place in the final stage of the qualifiers with the other nine group winners.

Going into the last two qualifying matches, coach Hugo Broos will know better than anyone that they will have to leave nothing to chance by trying to beat Zimbabwe at home and travelling to West Africa to get a favourable result against Ghana.

Bafana took the lead after 11 minutes when Getaneh Kebede shot himself in the foot by deflecting Victor Letsoalo’s header into his own net from a corner kick by Yusuf Maart.

Ethiopia nearly equalised minutes later but Kebede watched in disbelief when his shot from inside the box went agonizingly wide of the upright after they constructed a well-taken counter attack.

Just before the half-hour mark, Bafana missed out on an opportunity to increase their lead when Letsoalo missed a sitter in front of goal after he was set up by Bongokuhle Hlongwane.

Broos started the match with four changes from the team that beat the Ethiopians 3-1 last weekend away from home with Njabulo Ngcobo surprisingly inserted into the midfield in place of midfielder Mothobi Mvala, while Yusuf Maart came in for Ethan Brooks.

On the attacking line, Letsoalo started in the place of Thabiso Kutumela and Evidence Makgopa was in for Tshegofatsho Mabasa, but the duo ended their strong shifts empty-handed.

Goalkeeper Ronwen Williams continued to lead the team between the sticks, Siyanda Xulu and Rushine de Reuck marshalled the defence and they returned with the third clean sheet of the qualifiers.

A good number of Ethiopian supporters have turned up at FNB Stadium without necessary documentation and they have been denied access.#Qatar2022 pic.twitter.com/97PQdVa62s

The new midfield partnership of Ngcobo, Maart and Teboho Mokoena was impressive as they controlled things for most of the match.

Spectators were allowed into the venue for the first time since the outbreak of the coronavirus pandemic more than a year ago and the nearly 2,000 fans who turned up made their voices heard.

After 56 minutes, South Africa hit Ethiopia with a quick counter-attack that resulted in Makgopa’s goal-bound shot being cleared off the line by defender Suteman Hamid.

There were no goals to celebrate in the closing stages as Bafana held on for this important victory at home.