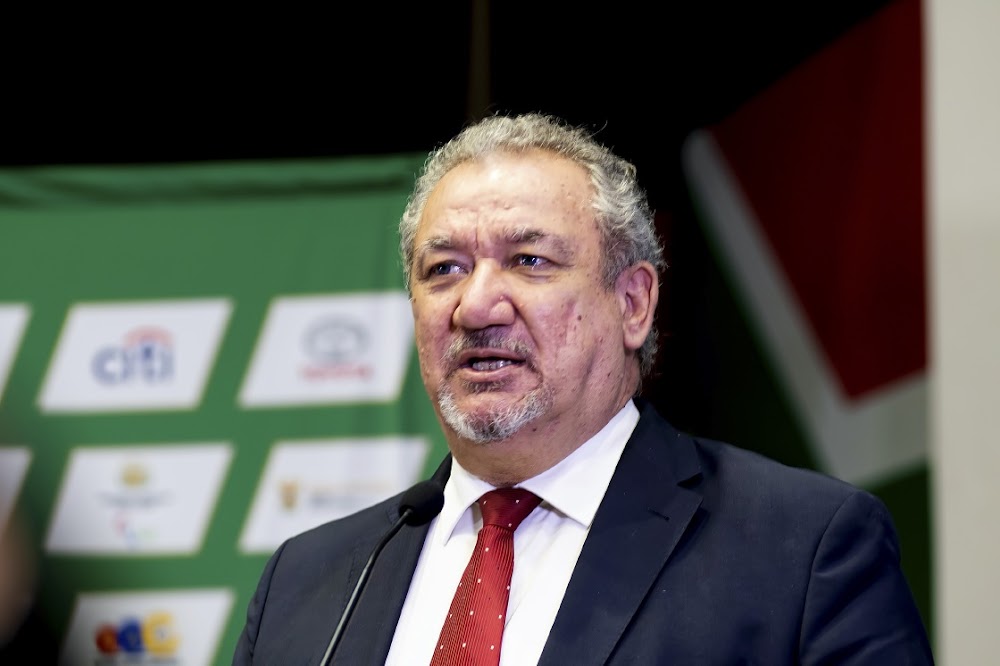 An upbeat Sascoc president Barry Hendricks reiterated at a sitting of parliament’s portfolio committee the sports controlling body’s stance that minister Nathi Mthethwa was interfering in the Cricket SA (CSA) saga over the controversial amendments to the organisation’s constitution.

Hendricks led the delegation of the South African Sports Confederation and Olympic Committee that appeared before the members of the oversight body in a virtual session to account on CSA matters.

Hendricks called on the committee to investigate its assertion that minister Mthethwa was interfering. Hendricks said it was “illegal” for Mthethwa to invoke section 13(5) of the Sports Act.

“We have tried to explain before‚” Hendricks told the committee before reading out the clause which states that the minister may not interfere in matters relating to administration‚ appointment or termination of the services of the executive members of a federation.

“The issue that we have here is that on two occasions the members' council of CSA met at duly constituted meetings (called SGMs) to deal with the matter of adopting the memorandum of understanding (MOI)‚” said Hendricks.

“At the first meeting they decided not to adopt the MOI, specifically relating to key points, and it is the demand from the minister that the majority of board members must be independent.

“The second issue‚ and this is the demand solely from the minister‚ is that the president should be an independent person as well.

“As I have previously explained to this committee‚ in 2012 the board of Sascoc sat down with the legal team of the department of sports and they came to a conclusion that based on the preference for civil society structures to elect their preferred leaders‚ because they are so constituted‚ that the majority of board members of CSA should be independent.

“That was rejected then and it was accepted then by the then-minister Fikile Mbalula. That is the policy. The Sascoc meeting on Saturday agreed that the policy will remain and there were no members who disagreed with that position.

“After the CSA members' council did not adopt the MOI the minister was not happy and asked them to go back to find common ground.

“At the second SGM the members' council again did not adopt the MOI but the minister this time went further and invoked section 13 of the Sport and Recreation Act‚ to not recognise CSA as a national federation and defund them.

“For us that is a clear violation of section 13(5)(b)(ii) which says that the minister must not interfere in the appointment or termination of the executive members.

“By invoking section 13‚ the minister effectively threatened cricket and the sponsors of cricket and thereby the members' council relented and adopted the resolution that there be a majority of independent board members and an independent chair.

“Sascoc disagrees with that process and that sort of threatening behaviour and using an act‚ we believe wrongly‚ to get a particular election process to be adopted and for certain members of the executive to be placed on a national federation sport‚” said Hendricks.

“In that respect, chairperson‚ can I ask that the oversight function of the portfolio committee be invoked in this particular case as well? The plea from Sascoc is whether a focus study group could take place to check whether the minister did in fact flout the act and for this committee to then provide us with advice regarding that particular matter.

“Our plea is for the committee to investigate this and provide findings to assist us on this matter to understand whether we are right or wrong.”

Hendricks came under fire from the ANC committee members over Sascoc’s interference claims but the Sascoc boss stuck to his guns while opposition parties were more interested in the details.

Hendricks said Mthethwa’s handling of the CSA matter threatened cricket and its sponsors and that Sascoc was merely trying protect the autonomy of sport.

ANC MP Mthenjwa Zondi asked: “I just wish to know‚ the autonomy of sports needs to be protected against who? Who is threatening cricket in SA?”

Hendricks responded that “the minister is threatening the autonomy of cricket by invoking the act and by insisting that certain members of the executive or the makeup of the CSA executives be entrenched, based on his will”.

The department of sport’s director-general, Vusi Mkhize, told Hendricks that Sascoc had failed to deal with the CSA matter in the first place.

“Sponsors were beginning to leave CSA and its international reputation was damaged. Sport does not belong to leaders‚ it is South Africans who own sport. The minister did not invite himself to this cricket matter‚” said Mkhize.

Deputy sports minister Nocawe Mafu also weighed in. “The minister has executive authority [and the] political authority to make sure that things go well‚” said Mafu.