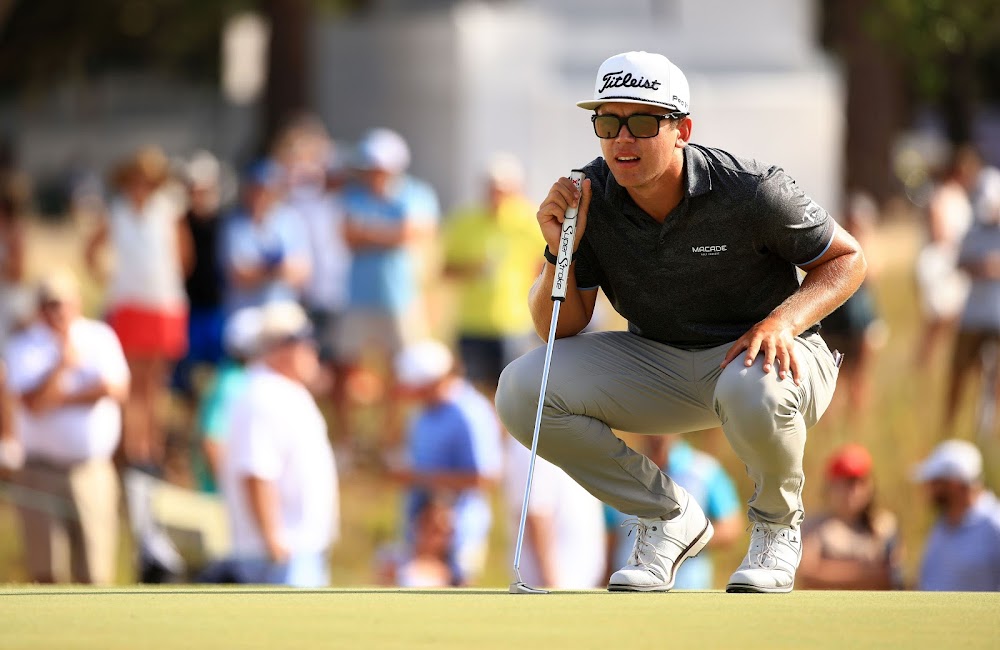 South African Garrick Higgo shot a three-under 68 and took advantage of Chesson Hadley's late collapse on Sunday to win the Palmetto Championship at Congaree by one stroke for his first career victory.

The 22-year-old Higgo finished at 11-under 273 at Ridgeland, South Carolina. The victory came in his second PGA Tour start.

"I'm just proud of the way I hung in there. It was tough all the way from the start," Higgo said. "Definitely didn't have my ‘A' game in terms of off the tee, but I like that sometimes.

"I like not having to play perfect golf. I enjoy scrambling and making a couple putts, which I did, which was awesome."

Six players tied for second in a suspenseful finish. Among them was Hadley, who had a rough day with a four-over 75.

Hadley held a two-stroke lead before he bogeyed 16, 17 and 18. He missed a nine-foot par putt on 18 that would have forced a playoff.

"I can only imagine what it looked like on TV because it looked freakin' awful from my view," Hadley said. "I mean, I could barely keep it on the planet."

Hadley had six bogeys for the round, along with two birdies.

Hudson Swafford shot a 66, Doc Redman and Venezuela's Jhonattan Vegas carded 67s, and Bo Van Pelt and England's Tyrrell Hatton shot 68s as the other five who tied for second.

The left-handed-playing Higgo trailed then-leader Hadley by six strokes when the final round began and was the beneficiary of Hadley's struggles.

Higgo notched an eagle on No 12 along with three birdies and two bogeys during a final round that marked his third 68 of the tournament. His other round was a 69 on Friday.

The eagle on the par-5 12th hole was set up by a second shot that left him just nine feet from the hole. He knocked the putt in and later made a birdie on No 14 en route to the win that gives him PGA Tour status through the 2022-23 season.

"I usually am a scoreboard watcher. For some reason today, I didn't watch it," Higgo said of the late-round drama. "I'm just trying to stay in it. I didn't really want to try and push. It's one of those courses that, if there are a couple of holes that you can definitely make birdie on, so I was trying to capitalize on those.

"When I made eagle on 12, I didn't have to scoreboard watch. I knew already I was kind of up there or close enough. It was just whether Chesson was going to run away with it or if we were going to stay up there and have a chance. Luckily, we did, and I'm happy that I capitalized on it."

Higgo was slated to board a flight to San Diego on Sunday night, as he is part of the US Open field at Torrey Pines. He earned an exemption into the coveted field recently due to his rise in the world rankings, which stood 54th entering this tournament.

He also is a hot golfer. Higgo has three wins on the European Tour and two of them came in his past three starts on that tour.

Swafford had a chance to be part of a playoff but bogeyed No 17. He had an eagle on the par-5 fourth hole to go with five birdies and two bogeys.

Vegas also had an eagle as he carded a 2 on the par-4 No. 3. He had four birdies and two bogeys.

World No. 1 Dustin Johnson shot 70 and was among four golfers who tied for 10th at 8 under. The South Carolina native hasn't been victorious since winning the 2020 Masters last November.

Hadley is the first player to fail to win after holding a 54-hole lead of four or more strokes since Justin Thomas at the 2019 Genesis Invitational.