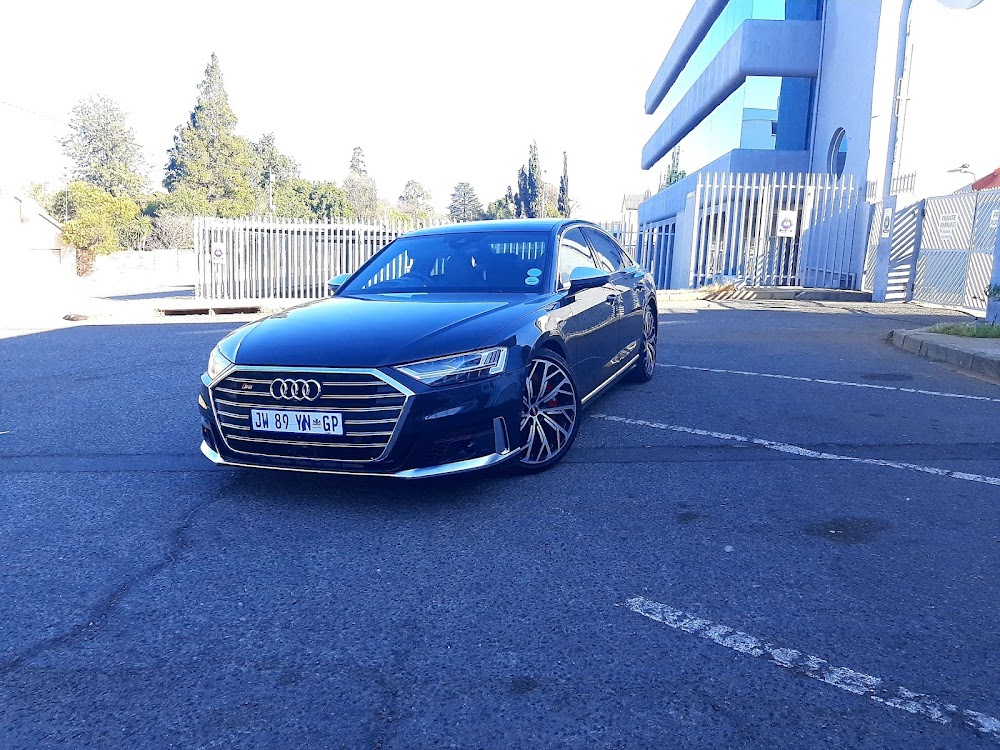 In the same vein that the AMG and M Performance-tuned S-Classes and BMW 7 Series are the respective sporting pinnacles of their luxurious ranges, the Audi S8 turns up the heat on the A8 line-up.

Easily identified though extra chrome on its imposing single-frame grille and as trimming on the lower bumpers, side skirts and as a light connecting strip at the rear, my test unit also featured the 21-inch multispoke style Evo alloy wheels, a R20,700 option.

For those concerned with dimensions the S8 — available here in standard-wheelbase model only with a 5,179mm length — is shorter than rivals such as the BMW 750Li xDrive M Sport and the Mercedes-Benz S500L 4Matic, and its pricing is smack bang in the middle of both.

It may have slightly less legroom than the competition but here’s enough room to run an empire from the S8’s generously plump and Valcona leather-clad and heated seats, which are separated by a centre armrest.

There are also charge points for cellphones, drinks holders and an electronic pad for the remote control of windows, climate and reading of text messages. The test car was also fitted with entertainment screens fitted on the backs of the front seats.

In front is a digital cockpit decorated in brushed aluminium and carbon inserts and festooned with many functions hidden inside menu buttons with haptic feedback. Luxury is plentiful and among standard amenities is head-up display, Audi connect, a phone box with wireless charging, and a panoramic roof and acoustic and heated glass.

There is astonishing sound proofing which leaves the cabin eerily silent on the move.

It also turns out the S8 is a limo you want to drive more than to be chauffeured in. The 4.0l twin turbo V8 engine with a rich baritone and 420kW and 800Nm, and mated to a silky smooth eight-speed automatic transmission, has the required low-speed tractability.

A predictive air suspension scans the road for discrepancies and proactively primes the suspension to absorb and deal with speed humps in the most luxurious gait, thus keeping the body level while negotiating the protuberances.

The motor has incredible duality. It consumed 11.6l/100km on a long trip but poke the Dynamic mode and this angers the mechanicals and stiffens the dampers, and the S8 turns into a seriously rapid brute that’s capable of rocketing from 0-100km/h in 3.8 secs with a 250km/h top end.

With its large physique this luxury behemoth has no stability issues thanks to all-wheel drive and it can be comfortably hustled into bends with confidence that seemingly contradicts physics.

In reality the oomph will occupy less of your mind because it wafts like its tyres are filled with cream and there’s more than enough pomp and technology to feel sufficiently special. It has more power than its rivals and few can argue that the S8 is an attractive car and a viable symbol of success.

Everything about the S8 feels and functions solidly and the V8 engine plays a huge part in the driving experience, whether cruising economically or rocketing off to a shareholder's meeting.

Is it the most underrated limo on the market? Without a doubt.

Slightly shorter than some rivals