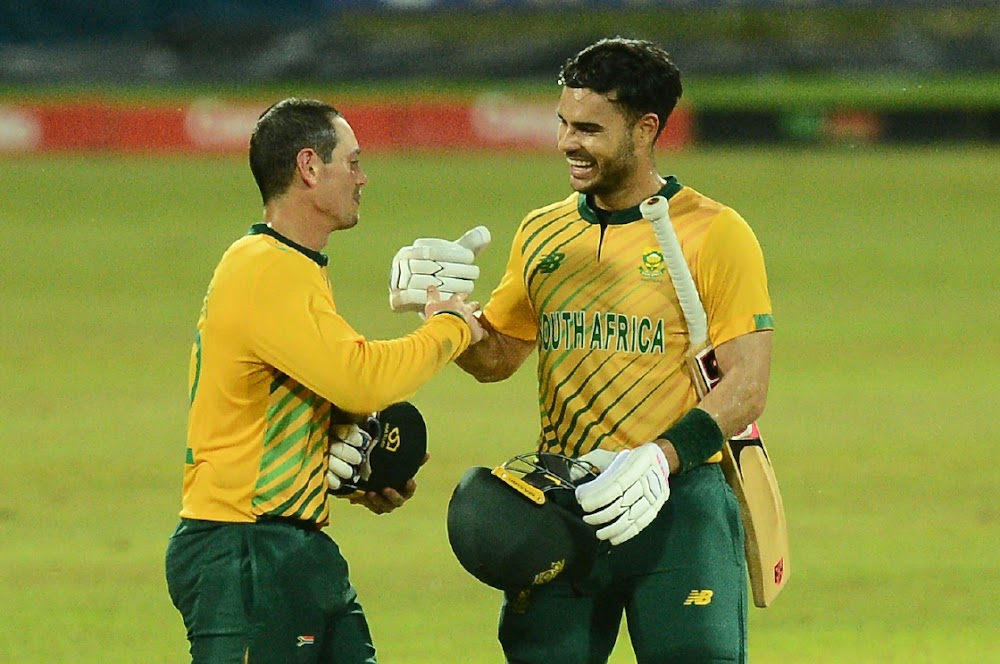 The Proteas signed off on their six-match limited-overs tour of Sri Lanka in emphatic style as they smashed their hosts by 10 wickets in the third and final match in Colombo on Tuesday to take the T20 series 3-0.

They dominated the home team from start to finish at the R Premadasa Stadium as they clocked their first 10-wicket win in T20s, and seventh on the trot in the shortest format after Sri Lanka had won the toss again, elected to bat again and managed 120/8.

It is also the Proteas' third successive T20 series win away from home. SA followed a come-from-behind 3-2 series triumph against world champions West Indies in the Caribbean in July with travelling to Ireland last month to also record a 3-0 whitewash.

The team will be pleased as the series success against Sri Lanka was their last competitive outing and will give them a shot in the arm building up to their T20 World Cup opening match against Australia in Abu Dhabi on October 23.

Kagiso Rabada, Quinton de Kock, Anrich Nortjé and David Miller flew out of Colombo immediately after the match to link up with Proteas teammate Lungi Ngidi in Dubai for the completion of the Indian Premier League (IPL).

The IPL will resume on September 19 in Dubai and conclude on October 15, a week before the Australian World Cup assignment.

The rest of the team will have a 10-day sojourn, which will include a team camp, before they head off to the World Cup, to be staged in the United Arab Emirates and Oman from October 17.

After winning the toss, Sri Lanka were in familiar territory, following a trend in the series, as their top order again failed to fire them to a bright start.

The home side lost their first three wickets in the first six powerplay overs and were in trouble at 47/3, with Kagiso Rabada (2/23), who went wicketless in the first and second matches, making light work of Avishka Fernando (12 off 8) and Bhanuka Rajapaksa (5 off 6). Left-arm spinner Bjorn Fortuin (2/21) got Dhananjaya de Silva (1 off 3) stumped.

When Aiden Markram, who bowled two overs for his wicket, dismissed Kamindu Mendis for 10 runs off 16 balls in the 10th over, Sri Lanka were staring down the barrel, with only opener Kusal Perera again top-scoring for the home side with 39 off 33.

Sri Lanka eventually limped to 120/8 in their 20 overs and would have fallen short of the 100 mark had it not been for captain Dasun Shanaka (18 off 26) and No 9 Chamika Karunaratne (24 off 19), who finished with a flourish.

In reply, Proteas openers Quinton de Kock and Reeza Hendricks sparkled as they scored half-centuries to guide SA to an easy chase with 32 balls remaining.

The duo registered the Proteas' highest opening partnership in T20 cricket (121) as Hendricks smashed 56 off 42 and De Kock 59 off 46.

De Kock was voted player of the series, top scoring with 153 runs, and Hendricks finished second with 112 runs. Fortuin was the leading wicket-taker with five wickets, one ahead of Markram and Tabraiz Shamsi.

It was a series the Sri Lankans will want to quickly put behind them before they leave for the World Cup.

SA won the second match by nine wickets with 35 balls remaining, as Sri Lanka were bundled out for 103, after winning the toss and choosing to bat first, for their record-equalling lowest T20 score.