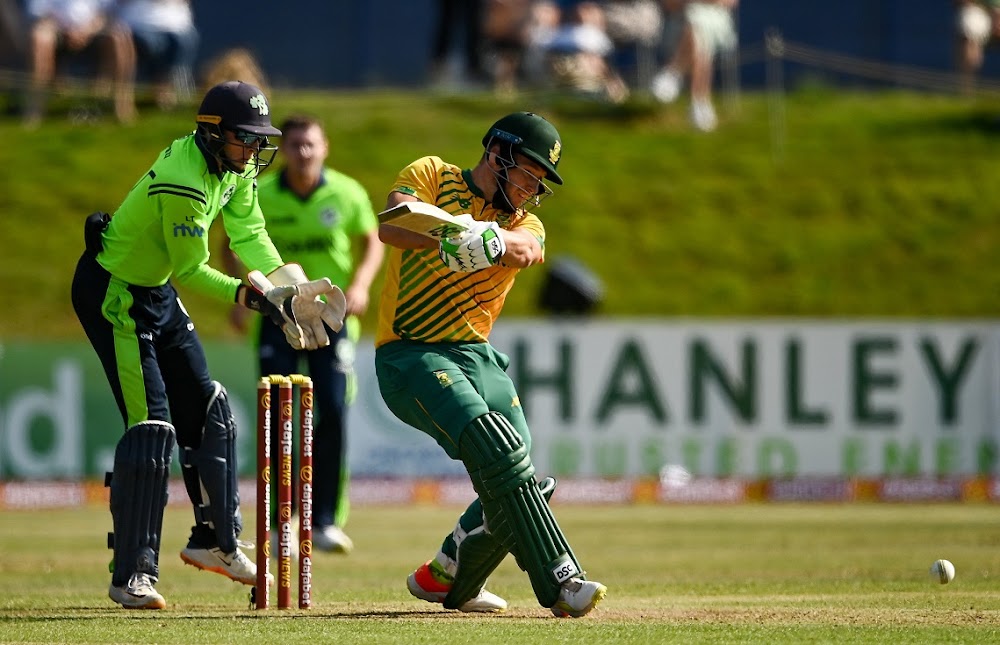 Explosive Proteas middle order batsman David Miller would like to bat higher in the T20 side but understands that the dynamics of balancing the team put him at No.6.

Miller returned to form with a sensational 75 off 44, which included four boundaries and six maximums, to help South Africa to a 43-run win over Ireland in the second T20 in Belfast on Thursday.

With that win the Proteas took an unassailable 2-0 lead in the three-match series that wraps up at the Civil Service Cricket Club in Belfast on Saturday, where they will be looking to complete a whitewash.

“There is a particular role that is required, especially going to a World Cup,” explained Miller, who is one of the most experienced T20 players for South Africa with 88 matches and one unbeaten century under his belt.

“One would like to bat higher and I have mentioned that to coach Mark Boucher and captain Temba Bavuma, but at the same time we have a bigger goal. Guys are definitely finding their groove but at the end of the day it is a particular role that is required in the position and I have been thrown into that.”

Miller said he will play where the structure needs him because he is a team player, adding it is not too hard to bat at six even though he sometimes doesn’t get a chance to settle in a match.

“I would love to look at opportunities like that of batting higher but I am a huge team man. I don’t want to sort of say I want to bat at No.3 or 4 or whatever the case may be.

“We have a structure in place and we are all on the same page. I wouldn’t say it is so hard to bat at six.”

Miller said he is chuffed at the way he performed in Thursday’s impressive knock,.

“I must be honest with you, I haven’t really felt like I was out of form. I just feel like in the last seven T20 matches in the West Indies and here in Ireland, there have been one of those situations that at times I was hard on myself to do better.

“Coming in at No.6, it was role that is sort of required and to base it on form, I have been trying to stay away from that because I just want to try and make an impact.

“It hasn’t quite worked out as an impact batter at N0.6 lately but [on Thursday] I had a lot of time to get the team out of trouble and it was nice to do that to put us in a great position for winning the match.

“I am very chuffed and happy about my performance, I have been training really hard and am in a good space at the moment.

“Boucher and the players have been supportive on tour. It’s been a long tour but I am chuffed to put in a performance.”