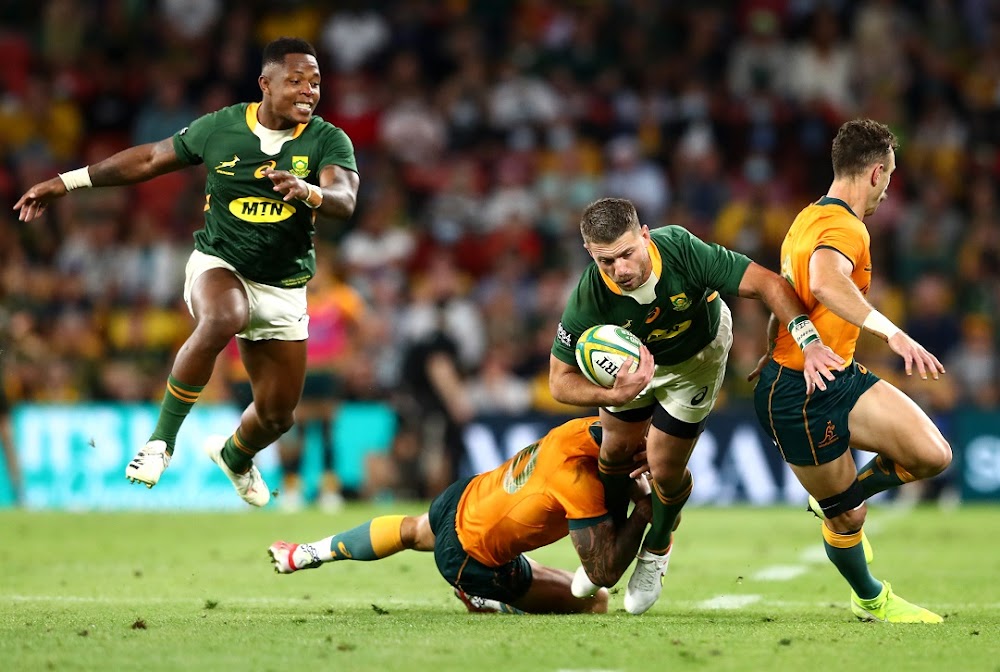 The Springboks failed in their mission to register their first win in Australia since 2013 after they were thumped 30-17 by the Wallabies in their Rugby Championship clash at Suncorp Stadium in Brisbane on Saturday.

This bonus point victory has refreshed Australia’s hopes in the competition while seriously denting the chances of SA, who face rampaging New Zealand over the next two weekends.

Australia have also completed a double over the Springboks after the narrow win at the Gold Coast and they will fancy their chances against Argentina in their remaining two matches.

The Wallabies have also managed 10 successive wins in Brisbane as they took advantage of SA’s poor performance of ill-discipline, poor handling and missed tackles.

Australia secured this win through a brace of tries from debutant Len Ikitau and Marika Koroibete and kicker Quade Cooper contributed 12 points with the boot.

SA were punished for ill-discipline early in the first half as they conceded two quick tries from Ikitau while scrumhalf Faf du Plessis was in the sin-bin, and there was another yellow card for Jasper Wiese in the closing stages.

One of the positives for the Boks was the improved kicking of flyhalf Handrè Pollard, who scored 12 points from four penalties to make up for his horror show of the Gold Coast.

The most significant moment of the first half came after 12 minutes when De Klerk was sin-binned for tapping the ball from Nic White’s hands as he tried to pass and Australia benefiting immediately from their numerical advantage.

With De Klerk out of the game, debutant Ikitau got over the line for the first try of the match but Cooper’s conversion attempt sliced off the upright and minutes Pollard put SA on the score sheet for the first time with a penalty.

Shortly before De Klerk returned from the bin, Ikitau registered his second try of the match after he received a beautiful offload from Koroibete with Cooper doing the rest from the conversion tee.

After Ikitau’s second try, it was a show of penalty kicking with Pollard scoring three in quick succession to keep the SA scoreboard ticking while Cooper put away one for Australia.

Australia suffered a blow when flanker Lachlan Swinton was sent to the bin eight minutes from the break for a shoulder charge on Duane Vermeulen and the Wallabies were not fully competitive during line-outs.

Shortly before half time, Pollard put away his fourth penalty of the day to narrow the score to only three points but the Wallabies reached half time leading by a narrow two points.

The Springboks started the second half with promise as they scored their first and only try of the match through centre Lukhanyo Am after he received a clever kick from De Klerk to give the Boks the lead for the first time.

Australia retook the lead again after 50 minutes after Cooper’s second penalty of the day in front of the poles and they further pulled away after the hour-mark with a try from Koroibete.

Koroibete registered his second try minutes later with Cooper doing the rest with the conversion and SA’s problems were compounded by another yellow card for Jasper Wiese in the closing stages.