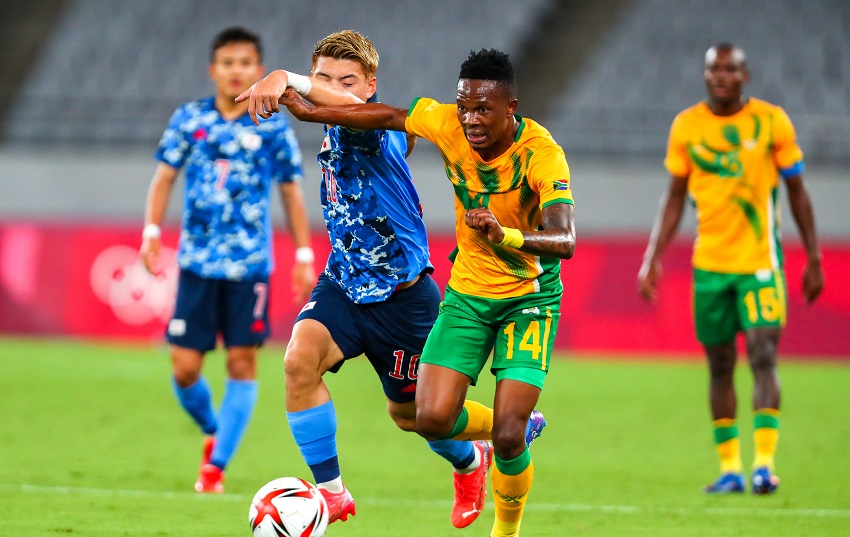 A much-depleted SA got a taste of what's to come at the 2020 Olympic men’s football tournament as hosts Japan took a clinical 1-0 win in the teams’ opening Group A game on Thursday.

SA Under-23 coach David Notoane opted for a 3-4-3 formation that, if wingbacks Reeve Frosler and Sibusiso Mabiliso get up and down the flanks effectively, could offer options in defence and attack.

SA defended bravely, centre-forward Evidence Makgopa more a front line of defence harassing the build-ups than a striker. But for such an understrength SA, their mission in Group A, which includes France and Mexico, is set to be a tough outing.

Given the relative preparations, this game against the hosts might have been more of a mismatch than when SA bravely held eventual winners Brazil to a 0-0 draw in the opener at Rio 2016.

SA’s build-up was hit by tournaments being cancelled by Covid-19. They lost three and drew one of the four warm-ups against Egypt and Saudi Arabia in the past year.

Upon arrival in Tokyo, SA had two players test positive for Covid-19 and the squad had to isolate for two days, only resuming training on Monday. In all they travelled seven days without training from their camp in Mpumalanga.

Frosler was rushed straight into the XI despite arriving late, having played in Kaizer Chiefs’ Caf Champions League final defeat to Al Ahly in Morocco on Saturday night.

Japan, well organised and with a high work rate, had a strong preparation. Senior national coach Hajime Moriyasu had successfully rebuilt the team that disappointingly exited in the opening round of the 2020 AFC Asia U-23 Cup.

They have been tipped to win their first medal since their bronze in 1968 in Mexico.

Given all these factors, it was not a surprise when Japan stretched SA through the opening half.

The classy PEC Zwolle left-back Yuta Nakayama was the source of much of Japan’s forward momentum, as Ronwen Williams had to make a string of saves to keep his team in the game.

After that chance, and past the hour, Japan seemed out of ideas. But they deserved a goal.

Skilful winger Kubo provided it, beating Mabiliso and producing a swerving strike from the edge of the box past Williams.