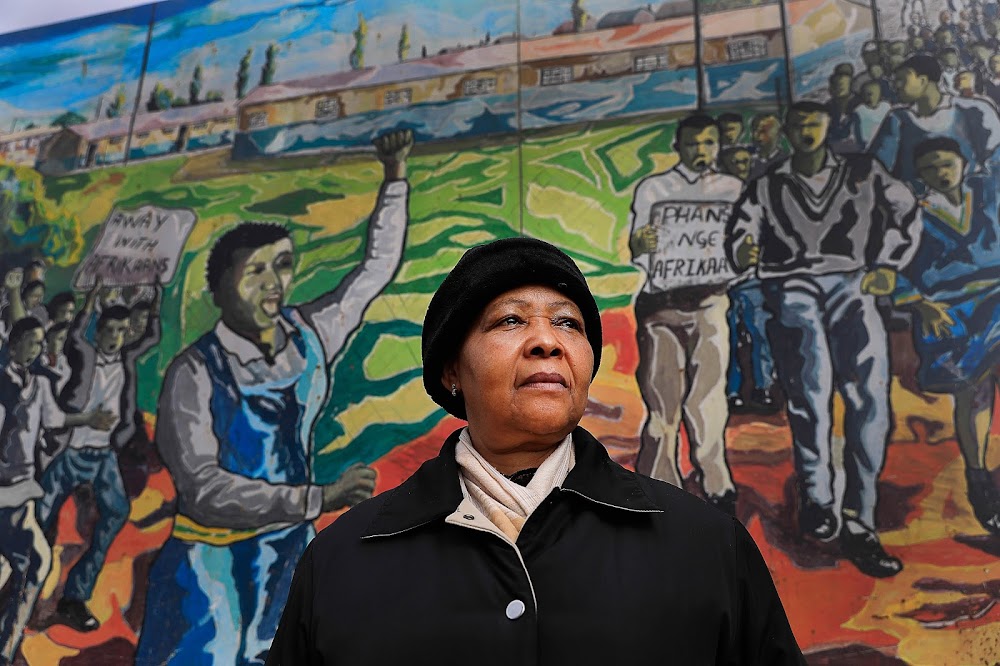 This was Hector Pieterson's sister Antoinette Sithole's message to young people as the country marks Youth Day on Wednesday.

South Africans are commemorating the 45th anniversary of the June 16, 1976, student uprising, which saw thousands of Soweto pupils take to the streets in protest against the introduction of Afrikaans as a medium of instruction in black schools.

The day's protests officially claimed 23 lives, including Pieterson and Hastings Ndlovu, but this number has been disputed by many who believe the police covered up a much higher number of deaths.

The march, which began peacefully but soon turned chaotic when police intervened, sparked further protests countrywide over the next few years. It is seen as one of the major turning points in the country's struggle for freedom.

Now, 45 years later, Sithole speaks with perfect clarity about the day's events and her brother's death, saying she remembered it “step by step”.

The energetic 62-year-old met a TimesLIVE team at Memorial Acre, which was set up to commemorate the day's events and features an array of artefacts relating to the uprising.

Sithole took the team on a mini tour of the facility, located in Soweto, including a short walk along a memorial wall set up outside the centre depicting the day's events. She then sat down to share her recollection of events and excitement in taking part in the peaceful march.

“I felt great taking part in marches [because] we had no choice. We didn’t know how to approach the government and our teachers, [so] we had to resort [to protesting] ... I was excited, no wonder I was spreading the word. I just imagined myself with a placard in the street,” she said.

While the day itself was described as “sunny and a bit cold”, Sithole said it was in complete contrast to the mood pervading at participating schools.

“You could feel that something was heavy on your shoulders. Most of us were pretending ... [trying] to make it as simple [as any other day] but could see that people were uptight ... most were worried,” she said.

The march was restricted to secondary and high schools - grades 7 to 12 at the time - and Sithole emphasised that younger children were not allowed to attend. Despite this, the excited youngsters could not resist joining in the swelling crowd as it made its way to Orlando Stadium.

Among those younger pupils joining in was Pieterson, who Sithole spotted well after chaos ensued when police fired at the peaceful protesters.

“When it was calm, I emerged back onto the pavement and I was scared. I was looking around, panicking ... While looking around, all of a sudden [I spotted] my brother on the opposite side. I couldn’t believe it was him.

“I [then] called out his name [Zolile] and he looked around. When he looked [over to where I was], I just waved and he came closer, smiling. As a big sister I had to show some braveness but I was very scared. While I was talking to him, there was another shot and we had to go back into hiding.

“Unfortunately, we went separate ways. When it was calm, he was nowhere to be seen. My mind was wandering, big time ... I couldn’t focus or think clearly.

“And a man just came from nowhere running towards me and as he passed me, my eyes followed him and not very far from where I was, something [had] happened. And I think that man was actually running to the scene. When he got there, you could see that he was making way, pushing students.”

Sithole recalled seeing the man, who she later found out was Mbuyisa Makhubo, struggle and eventually lift a body off the ground. She recognised the body as that of her brother after spotting his shoes.

An agitated Sithole then ran to the scene as Makhubo came her way with a wounded Pieterson in his arms.

“I joined them and while running I was asking this man, ‘who are you, this is my brother, I’ve been looking for him. Where are you taking him’? ... but the man kept running.

“All of a sudden, a car just stopped in front of us and a lady jumped out and introduced herself as a journalist and said she could help us. So as that man was about to put my brother in the car, he said ‘oh, he’s dead’.

“I was sort of torn in two, I could see myself on the other end crying in desperation ... it was like this is not real, it can’t be happening,” she recalled.

Makhubo, Sithole and Pieterson gained recognition when an image of the former carrying Pieterson with the 12-year-old's sister running alongside them made headlines in SA and globally.

The iconic image, which became one of the symbols of the struggle against apartheid, was captured by photographer Sam Nzima.

Sithole shared fond memories of her brother, with whom she had a close relationship. She described him as “naughty but quiet” and with a fondness for karate movies.

“Even though he had friends, he would play where we [the family] could see him ... he was homely. He also loved jokes,” Sithole remembered with warm smile.

“They did not die in vain, their blood cleansed the injustice [of apartheid] ... sometimes pain is pain but when you look around at what's happening around you, then you no longer call it pain, you call it a sacrifice,” she said.

"[Hector] did not only die for us [as a family] but for South Africa,” she said.

She encouraged SA's youth to rally to tackle the issues affecting them head-on, just as the youth did on June 16 1976.

“They as youth must make sure that whatever problems they have, they take a stand ... write placards, picket [and walk].