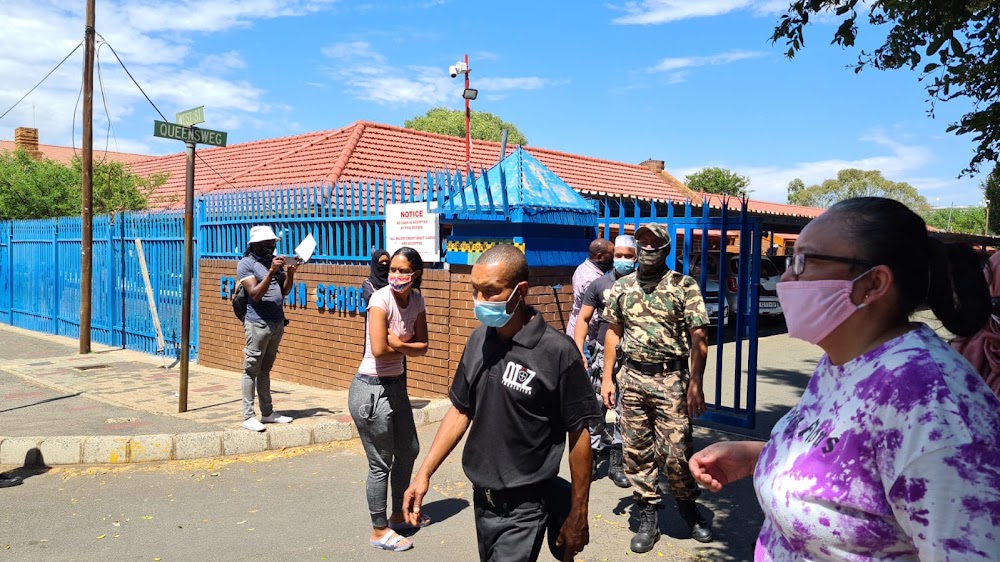 Concerned parents have gathered outside the EP Bauman Primary School in Mayfair, Johannesburg, after a schoolgirl was allegedly kidnapped on Wednesday morning.

Details of the abduction are unfolding as authorities gather information.

Councillor Rickey Nair was on the scene within a few minutes following the incident after being informed by a neighbourhood watch member who was dropping his child at the school just before 8am.

“Two men pulled up in a Toyota Yaris, both armed with AK47s. The children were lining up outside the gate and they called the girl. They knew their target,” he said.

“The vehicle’s registration plates came back as fake.”

Nair said the girl’s mother panicked and went home. She received a phone call as soon as she arrived home telling her not to call the police or the media.

“The kidnapping task team are with her at home and the children and teachers are being addressed by social workers and councillors.

“The teachers are traumatised. There is nothing that could be done. It was organised crime.”

Gauteng education MEC Panyaza Lesufi said he is deeply concerned about the alleged kidnapping. He said the child is a grade 5 pupil.

Nair said the child is nine years old, but the education department has her age as 11.

Lesufi’s office said she was allegedly kidnapped at gunpoint by three men in a new-shape silver or white Toyota Yaris with the registration number JS62CS GP.

“This happened outside the school gate while she was waiting in line to be sanitised and screened. Police are investigating circumstances surrounding this matter.”

Lesufi urged any witnesses to contact police: “We are pleading with any member of the public who may have witnessed the abduction or knows anything about this incident to approach relevant law enforcement agencies.

“We condemn the actions of criminal elements who prey on young pupils. Our prayers are with the family and friends of the young pupil.”

He said the department had deployed its psychosocial unit to the school.

Nair said the girl is the daughter of wealthy foreign nationals who own a hotel in the area.

“It’s not unusual in this area. Two weeks ago a foreign national was also taken but was released after 40 minutes.”

The incident comes hot on the heels of the kidnapping of the four Moti brothers en route to their school in Limpopo. The children were reunited with their parents after three weeks.

Her mom was getting her bag out of the boot. The men called the girl’s name and when she looked over they picked her up and put her in the car.

Concerned parents Vanessa Stewart and Samantha Khan have been at the school since 8am after hearing of the kidnapping from the community WhatsApp group.

Said Stewart: “We’ve come to check our children are OK. We just want to take our children home but the school is not letting us [yet]. We’re not sure if this is random or targeted.”

Khan said the vehicle was silver and arrived behind the driver of the girl.

“Her mom was getting her bag out of the boot. The men called the girl’s name and when she looked over they picked her up and put her in the car.”

Another parent, Netherlands Jwarts, said she just wanted to see her daughter and know she is fine.

School officials addressed the parents, saying the children would be kept at school until the normal time because they wanted them to feel safe and to experience normality.

Parent Mariam Mohammed said teachers and children were in tears after the incident.

“There was nothing people could do, the men came with big guns. They told security, ‘F**k off or we'll shoot you.’

“We’re going to just wait here till our child is out.”