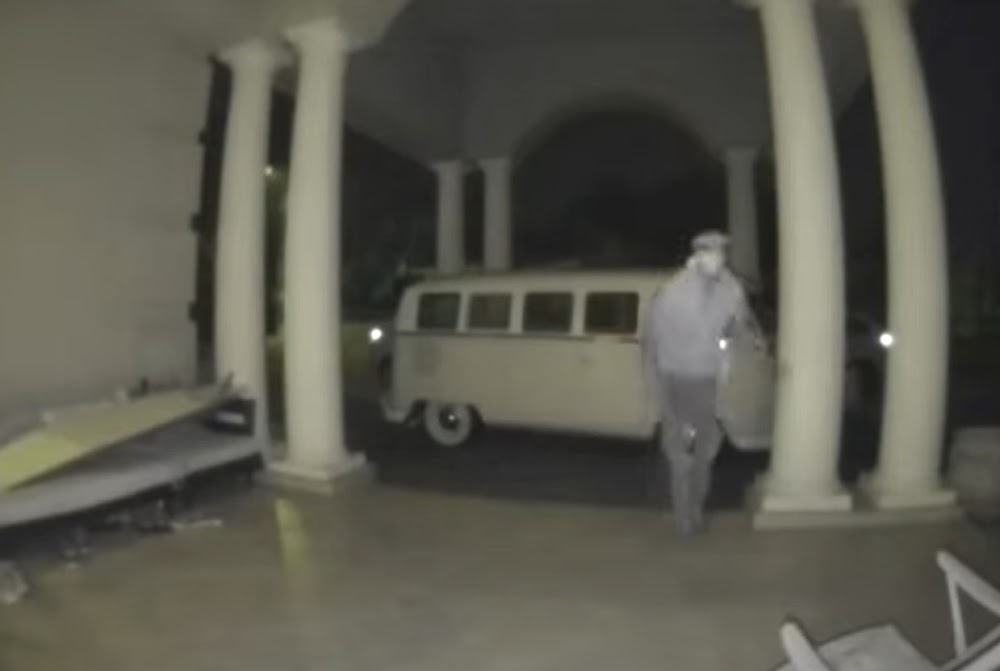 Doorbell footage from the luxurious Honolulu, Hawaii home where KwaZulu-Natal-born club rugby player Lindani Myeni was shot and killed on April 14 has been released.

The video, which is just over three minutes long, covers the period between 8.07pm and 8.15pm on the night of the shooting.

The first doorbell recording starts at 8.07pm and and shows the 29-year-old’s car driving into the parking area at 91 Coelho Way, right behind another car that contains two of the five occupants of the property.

The video then shows the couple walking into the building followed by Myeni, who is wearing his uMqhele,  a traditional ceremonial Zulu headband, something he would wear to visit a spiritual place like a church or temple.

Myeni can be seen removing his shoes before entering the home with a mask on his face. His voice is faintly head as he introduces himself.

He enters the home at 8.08pm and comes out less than 40 seconds later.

He is seen doing a double-take when, through the door, he sees and hears a woman ostensibly speaking to someone on her phone about a “break-in”.

The doorbell video ends seconds before 8.10pm, with Myeni just outside the door.

According to family attorney James Bickerton, Myeni re-entered the house soon after this.

According to Bickerton, on the 911 call at 8.11pm ( one minute 54 seconds into the call), a  man, who has been talking calmly with Myeni in the background, calls the landlord.

“He remains on that call for seven minutes, until after Myeni is fatally shot at 8.15pm. In that one minute and 54 seconds, we can hear Myeni conversing with the man in the background of the woman’s 911 call. The couple remain on their respective phone calls until after Myeni is shot and dying in the driveway outside,” he said.

Bickerton said from 8.11pm to 8.12pm (a timeframe of exactly 76 seconds), no-one is talking to Myeni or answering his questions.

“The couple testified that Myeni never came closer than one to two meters and made no physical contact. On the 911 call, the woman confirms to the operator that Myeni is not armed, shouting or threatening. The landlord has confirmed in a deposition that no property was taken, missing or otherwise disturbed.

“It appears that while the two callers were occupied with their phone calls, Myeni walked out of the building at 8.12pm,” he said.

In the video, Myeni says “sorry” repeatedly and has a brief conversation at the doorway with the male, who is still on the phone with the landlord.

He puts on his shoes at the edge of the porch, says “sorry” one last time, and steps off the porch just before 8.14pm.

The “get on the ground” command from police comes 64 seconds later.

“Throughout, Myeni is polite, gentle and respectful. He apologises multiple times and leaves. The time stamps on the ring doorbell video and the police body cams show 96 seconds after he said sorry and stepped off the porch, Myeni was lying on the ground dying, shot multiple times,” said Bickerton.

He said  for too many years similar events have happened in Hawaii and around the US, but there was nothing to test or challenge the officers’ accounts of events.

He said they had received the full unredacted body cam footage for the period of time following the shooting and were still processing it.

“We are fortunate to have the recordings linked. With modern recording technology, doorbell videos and body cams, the public can see what has been going on and we hope this technology will help bring such police conduct to an end.

“The police defence that ‘we have to react quickly to dangerous situations’ makes little sense when they create the danger and the urgency by failing to follow standard procedures, which include identifying yourself and your police purpose when you command someone at gunpoint,” he said.