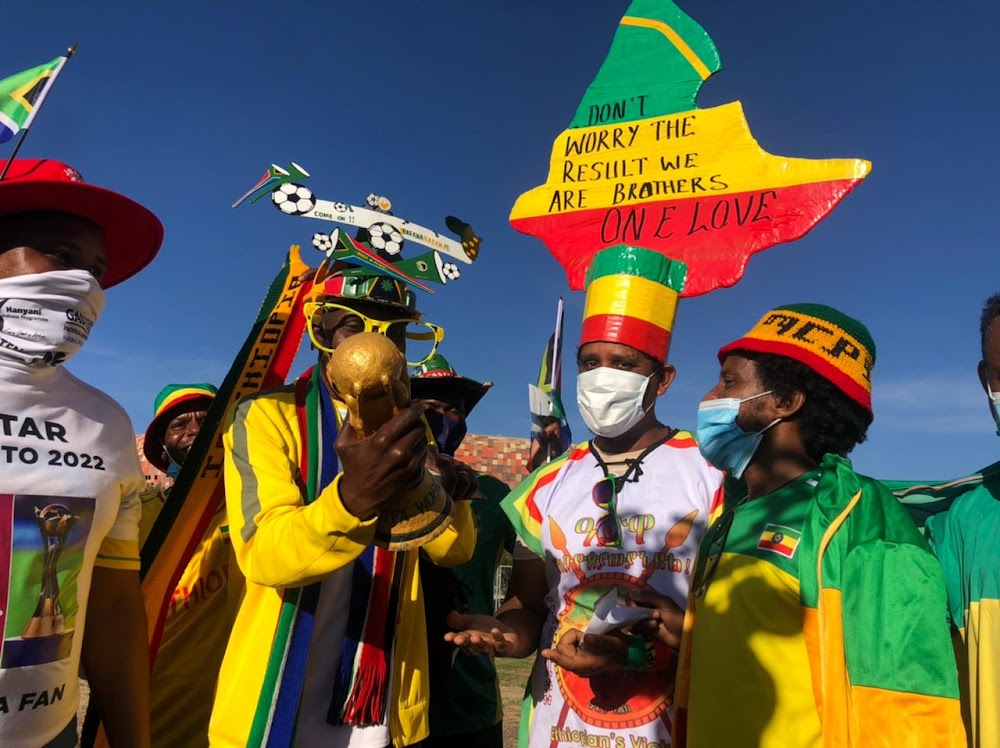 An entrance to the FNB Stadium in Soweto had to be closed on Tuesday evening after fans without tickets for the Bafana Bafana vs Ethiopia game tried to force their way into the venue.

About 70 fans made their way to the entrance just after 5.40pm, demanding they be allowed on to the stands. They said an advert for the game said entrance was free.

This was the first live international sports fixture in the country since the outbreak of the coronavirus pandemic in March last year, and attendance was limited to 2,000 fans, who had to be fully vaccinated.  Applications for tickets had to be done online, and they were quickly allocated.

Police and stadium security were called in and, about 6pm, just before kickoff, were negotiating with the disgruntled crowd.

Police instructing those without tickets to leave FNB stadium.
Earlier, a crowd tried to force their way into the stadium because they said the info they received is that the game is free @TimesLIVE pic.twitter.com/SNKDmjhnnC

Those with tickets and vaccination cards were being diverted to another entrance.

The incident threatened to mar what had been a jovial atmosphere at the stadium in Soweto as football fans said this was a day they had been longing for.

Police quickly dispersed the crowd, and the situation was quickly brought under control.

A scuffle ensued between police and one Ethiopian fan who didn't want to leave and demanded that he be let in. The defiant man claimed that they were told that entry to the stadium was free and that there was no mention of online tickets.

However, the situation was diffused as the man's friends calmed him down and he agreed to leave.

All those without tickets have moved away from the entrance and are standing in the parking area.

Some fans who spoke to TimesLIVE said that though they didn't have tickets, they were hoping to find someone with an extra that they could get their hands on.

Moshe Nkosi from Pretoria is among those without tickets. “I'm at a point where I'm even willing to pay anyone who can give me a ticket,” he said.

Other ticketless fans said they would wait outside until the game ended, while others treated it as an outing and played music in their cars at the parking lot.

“Whether I'm inside or outside makes no difference. I'm just here to support our team,” Lesego Moerane from Soweto said.

Since March 2020, SA has joined most of the world by locking down in response to the coronavirus pandemic. Among the casualties have been live sport events, which have taken place behind closed doors in an effort to prevent the virus spreading.

On Tuesday night that was finally set to change, when about 2,000 vaccinated fans were allowed into the hallowed turf of the stadium which hosted the opening and the final of the 2020 Fifa World Cup.

Jeanette Lesisa, from Midrand, was among the first people to walk through the stadium gates and take up her seat.

It was a surreal feeling, she said, being with few other fans and having to wear her mask, but it gave her hope normality would return.

She said she was desperate to get her ticket when online applications opened on Monday.

“I couldn’t wait. I kept refreshing the page, and when the sales opened, I made my application,” she told TimesLIVE.

Even though she was disappointed to find out drinking and eating were not allowed in the stadium, it didn't dampen her mood.

“I'm just happy to see the game live,” she said.

Lelis Quintanille, from Mexico, has been living in SA for 10 months and said she has always wanted to watch Bafana Bafana in action after her country and SA played to a thrilling 1-1 draw in the opening game of the 2010 World Cup.

Quintanille, who was attending with friends and colleagues, said though she could finally watch a game live, she was told she wouldn’t get the full SA experience because there would be no vuvuzelas at the game.

“I’ve been looking forward to see the national team play. I came into the country at a time when spectators were not allowed in stadiums and I’m glad this is happening today,” she said.

For other fans it was a day of disappointment, however. Many Ethiopian supporters were turned away, saying they didn’t know they had to get tickets online and only had to arrive with proof of Covid-19 vaccination.

Teddy Gemechu, Gezhaga Agega and Ehiso Ashomo spoke to TimesLIVE outside the venue, having driven from Polokwane in Limpopo to attend the match. However, they were turned away.