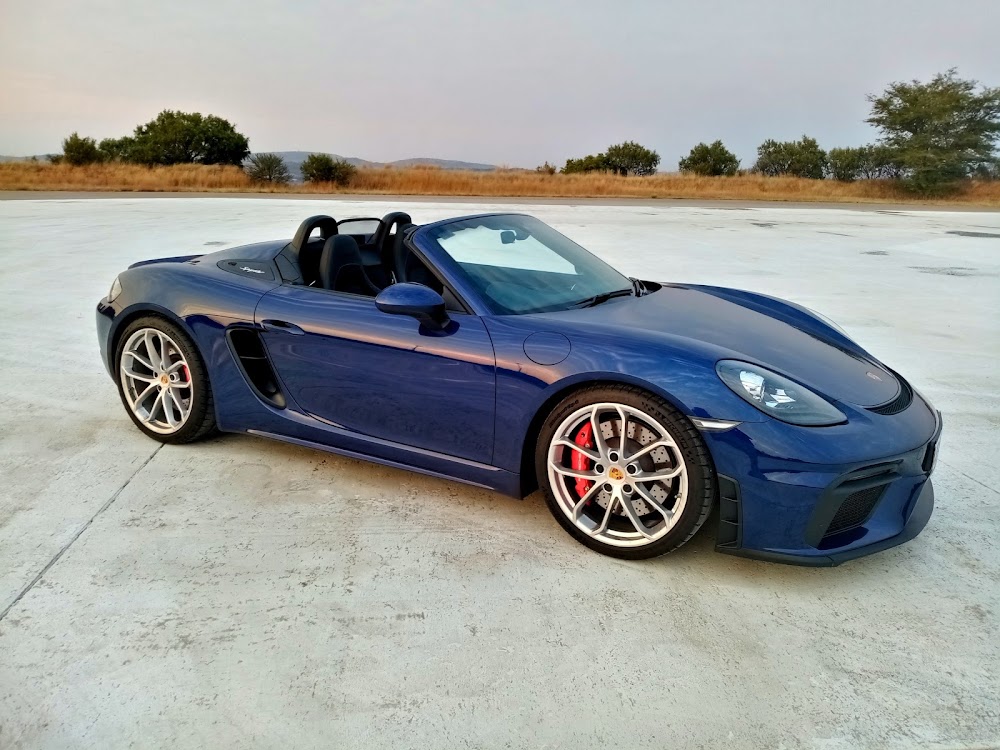 Just like the regular 718 Boxster, the Spyder recipe means it has a cloth roof but one that requires mostly manual labour to convert. It takes longer to peel off than the conventional Boxster roof but it is not that infuriating and it is part of a weight-saving programme and a rebellious charm of Spyder ownership.

It is a snug cabin with challenging entry and exit because it is such a low car.

The materials used inside are the usual high-quality Porsche standard with mildly bolstered but grippy seats covered in Race-Tex cloth. It also gets door pull straps while the rest of the cabin is pure Boxster in decoration and arrangement.

Compared with conventional Boxster models, the Spyder’s styling is more expressive through a pair of bulging Speedster humps behind the cabin. Powerful looks aren’t the only priority though.

The Spyder also gets the raft of mechanical upgrades found in the Cayman GT4. It is the same mid-mounted, naturally aspirated 4.0l engine with outputs of 309kW and 420Nm, but now married to a seven-speed PDK transmission.

You can have it in a six-speed manual, but I find the self-shifter is the more sensible option, especially for urban life. It adds more to the amazing civility of the Spyder when driven normally. The engine hums along fairly quietly and the ride quality is pleasantly supple.

Having an auto transmission also means quicker gear changes and an automated, easily deployed launch control system that enabled me to record 4.53 seconds from standstill to 100km/h at the Gerotek test track. This and a top speed of 301km/h are nothing to be sneezed at.

To have fun, ensure to warm up the wheels before activating firmer damper settings and switching the exhaust system to sport.

Here the Spyder buzzes delightfully while the rev needle rises, bouncing off the engine’s 8,000rpm maximum. You can imagine the cacophony but this is not the only amusement to be drawn from the 718 Spyder.

The need to heat its rubber is due to its 20-inch alloys being shod with Michelin Pilot Sport Cup 2 semislick rubber as standard. Due to this and a mechanical differential it can also carve out corners like a little pro racer.

I experimented with most driving scenarios, including a stint around a handling track where it displayed incredible grip and motorsport-grade poise. I also hung its back out on a skid pan where its traction systems made assurances for driving on wet surfaces.

The Spyder experience and its auto ’box showed this car is not reserved for driving purists. It was exceedingly adept in some unlikely areas too, such as touring comfortably and averaging 7.9l/100km, showing that it’s a rebel with a pause.

Like regular Boxsters it has two boots — front and back. Because the rear window is made of plastic instead of glass for ease of folding the roof outside noises creep into the cabin with more clarity. The positive side of this is the amplification of its characterful engine directly into your ears.

The Spyder delivers the elemental go-kart agility you expect from the Boxster series but in bigger helpings of driving thrills. It is not scary or wild but it keeps you enthralled in a legitimately Porsche way.

A style icon with a motorsport heart