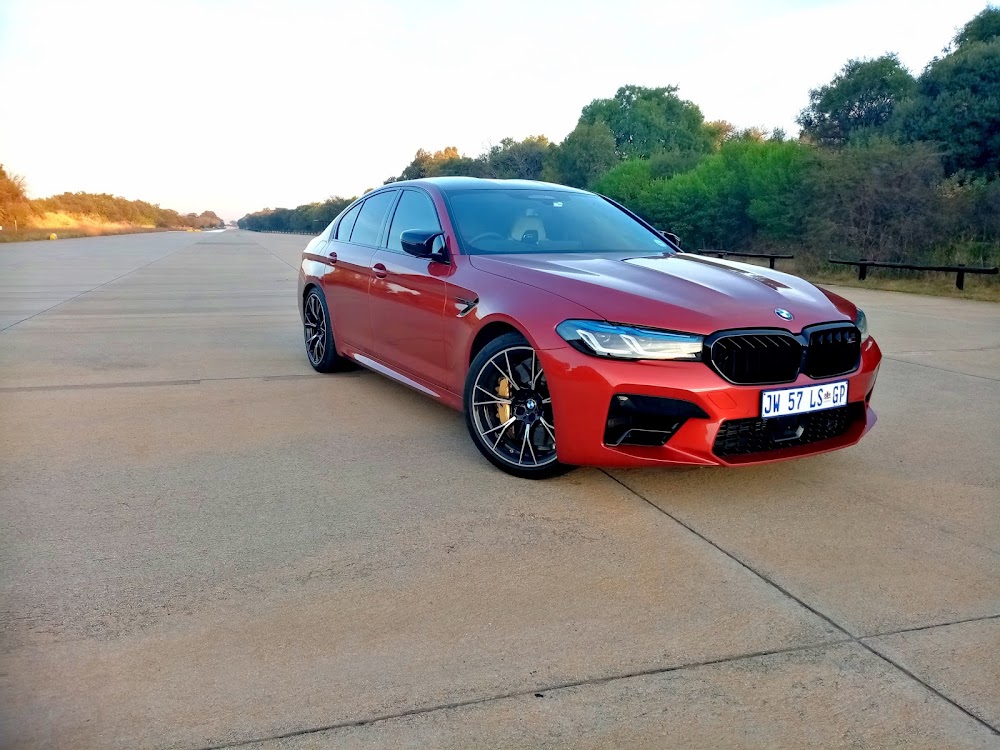 I recall the marketing blurb when the current generation BMW 5 Series range arrived on the scene, circa 2018, long before the M5 joined the range a year later. It said "Business Athlete".

Looking at the facelifted M5 Competition with its rear valance made wilder by a big-bore quartet of tail pipes with carbon sleeves, 20-inch alloys with gold-coloured brake calipers that signal big-biting carbon fibre ceramic brakes, plus a 460kW and 750Nm twin-turbo V8 engine upfront, this, and not a 520d, is the true business athlete.

Hit the starter button and the second most powerful M5 in history (the new M5 CS is 7kW stronger) comes to life with a neighbour-relations destroying BWAAARRRRR which settles down to a delicious and subtle timbre after a few moments.

The adjustability and computing power of the thing is staggering. In standard start-up guise the torque is sent to all four wheels. You can suspend the traction control and drive it under the protection of all-wheel drive, or you can evoke the classic BMW front steer/rear drive configuration. For safety reasons the M5 will disallow cruise control in this mode.

You can also tailor the steering for light or stiffer responses; similarly the dampers can be altered for wafting or a firmer texture. The veracity of engine and transmission too can be set for rapid fire delivery or leisurely responses. Ditto the exhaust system which at a push of a button hums quietly or bellows hard and introduces spectacular overrun pops and bangs.

The duality is incredible. Off the boil the M5 Competition could very well be a docile 520d languishing in the slow lanes, hushed up yet laden with motorsport ferocity. The enhanced ride comfort over the pre-facelift model is evident and if allowed it can dine on the contents of its fuel tank with acceptable civility. BMW claims a 10.6l/100km average. Laughably, my best achievement was 18.4l/100km. With more time, a longer journey and restraint perhaps the factory claims could be realised but I seriously doubt this.

It’s marketed as a family-friendly performance sedan that can fit four to five passengers with ease and the boot is deep enough to swallow 530l of cargo but the rear bench doesn’t split-fold to the detriment of carrying longer objects.

This fails to undersell the BMW M5 Competition’s usefulness and it remains a good daily drive that can also throttle and steer autonomously under the right traffic conditions, if you opt for this feature.

But it’s the ability to launch past 100km/h from standstill in a cracking 3.3 seconds and run out of steam at 305km/h that’s always burbling. On a skid pan, and in rear-wheel drive mode, it was surprisingly effortless to drift about, with clear communication of how the rear keeps pivoting. A turn at Gerotek’s dynamic handling track also revealed incredible aptitude and fluidity for a nearly two-ton behemoth to dance between chicanes.

It’s never going to match an M3 for outright agility but it claws and steers remarkably well in pursuit of motorsports sensations.

Though BMW has tweaked only the chassis with no extra cups of venom added to its engine, there’s a palpable increase in the delivery of that famously addictive spurt of lunacy which has defined the mystique of BMW's M5 for more than three decades. This new Competition version has upped the ante for the legacy, and for pretenders to the throne.