No more skirting around: popular Xhosa wear gets attention from UWC researchers 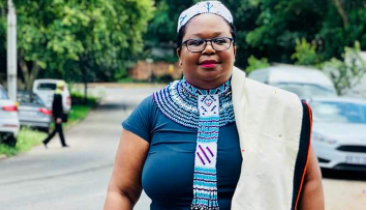 A traditional ceremony in Xhosa culture without umbhaco is like a wedding without a cake.

This traditional skirt, made of durable cotton, is often worn by Xhosa women at ceremonies and celebrations such as weddings, initiation ceremonies and other special celebratory occasions. It has also been exhibited in museums and repurposed by fashion houses. It’s even been used as a symbol of defiance in moments of resistance during political trials.

But, surprisingly, there’s been very little research done on umbhaco, and it is for this reason that a University of the Western Cape (UWC) researcher, Bongiwe Hlekiso, has decided to dig deeper and trace its history beyond its use at museums and traditional ceremonies.

Hlekiso, a doctoral student at the department of history at UWC, will be able to trace the rich history of the skirt after winning the prestigious Ivan Karp doctoral research award.

The award forms part of the African critical inquiry programme - a partnership between UWC’s centre for humanities research and the Laney graduate school of Emory University in Atlanta. She and fellow UWC researcher Robert Uys are the recipients of the 2021 award, which supports African doctoral students in the humanities and humanistic social sciences enrolled at South African universities.

That support will allow Hlekiso to conduct research for her dissertation, “Becoming a Hidden Treasure: A Biography of Umbhaco and its Interrupted Trajectories”.

“Receiving this award is an incredible honour,” she said. “It’s such a gratifying recognition towards my project - not just my work but also towards the work of other individuals who are recipients of this award.”

“It means that I have been given an opportunity to conduct my research without financial worries. I’m going to make the most of it. I will examine the multifaceted use of umbhaco in and beyond the spaces of the museum and these other imaginations of tradition, examining the making of umbhaco by different producers and what stories are told through its making. Umbhaco is far from being merely a museum object.

“It often forms part of narratives among Xhosa speakers and comes to be fixed in meaning - which is actually the crux of my project: that this garment is not fixed, but it evolves and changes with time,” she added.

Hlekiso will locate the item within exhibits and displays in museums and art galleries in SA, and explore the histories it represents in these spaces. In doing so, she will provide a historical foundation to rewrite the original label of umbhaco that was located at the Hidden Treasures exhibition at the Iziko South African National Gallery from August 2017 to January 2020.

She will also examine the histories of umbhaco and the different biographies of the producers, sellers and wearers, and their associations with the garment. Additionally, she will explore how the umbhaco has become a commodity by looking at the different makers and sellers of the skirt.

“I will also interview producers, distributors and wearers to analyse the various narratives around its diverse uses. Becoming a Hidden Treasure will interrogate the garment as a cultural commodity and how different and changing meanings and values are placed on it.”

Hlekiso chose the topic because little substantial research has been conducted about the garment, unlike other African textiles  such  as isishweshwe and the Aso ebi cloth.

“I am drawn to the multifaceted use of umbhaco beyond the cultural aspect, and also how umbhaco evolves. For that reason, it pushes me to further interrogate umbhaco in different spaces such as the museum, art galleries and fashion,” she said.

For her the research is also for personal reasons. As the youngest in a family of seven, raised by a single mother, the garment played an important role in her upbringing in Beaufort West.

“Growing up, my mother wore one, and different women in my community adorned umbhaco during ceremonies like weddings and initiation celebrations. I knew a little bit of history from my background, and that aroused a desire in me to know more about its history, and how it came to be worn by amaXhosa.”