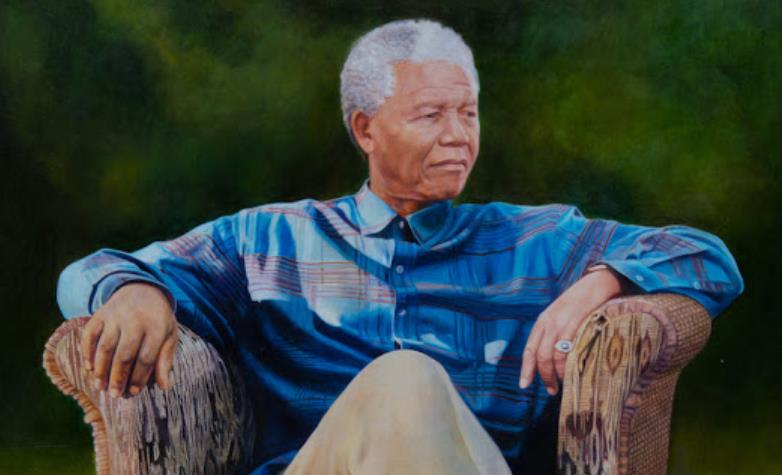 Coetzee painted many portraits of Mandela, most notably his official presidential portrait which was used on a postage stamp to mark his 90th birthday.

This companion portrait is being shown courtesy of the current owner, who wishes to remain private.

The artist said it pays homage to “Mandela’s sensitivity over and above his strength”.

On his website, Coetzee said Mandela sat for him twice for commissioned portraits, once during his term as president and again together with Graça Machel for a wedding portrait. The portraits were both for Mandela’s private collection, and were originally displayed in the entrance chamber of his Houghton, Johannesburg, residence, he said. The presidential painting was later donated to the Nelson Mandela Children’s Fund.

“There was always more than one portrait to be painted of Mandela because there were so many facets to who he was.

“His personal side was not just an aura created by the media. It was who he really was — a man who transcended his position of power to be truly compassionate and kind to everyone,” said Coetzee.

The artist said the newly-shown painting “is deeply introspective, showing an introverted side to the charismatic, bold leader. It is a rare encapsulation of Mandela looking within”.

“It is in the nuances where his sensitivity and inner contemplation are shown. Mandela’s legs are crossed, a shift in body language that creates a subconscious indication he is no longer fully engaged with the viewer. His head is turned away, his gaze fixed on something we cannot see, his thoughts in a place we cannot go. It gives the overwhelming feeling of a person who has retreated within themselves, reflecting on memories, moments and people only they have access to.

“As we enter Mandela Month, this refreshing and insightful portrait presents the opportunity for a more meaningful celebration of this exceptional man.”