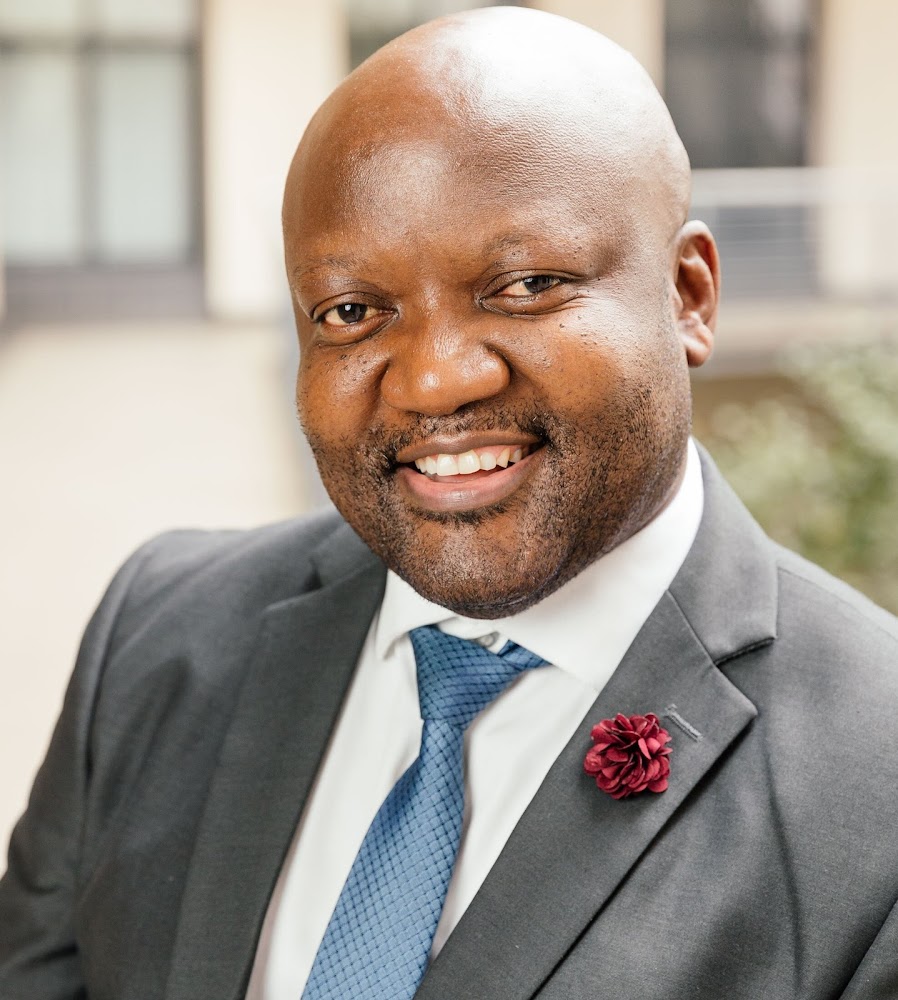 Denis Mitole who suffered a stroke leaving him only able to type his master’s dissertation with one hand is the proud holder of a master’s degree in tax from the University of Pretoria (UP).

“I had no excuse. I had to get out of rehab and finish my dissertation,” he said.

“Within the first few months I’d lost my laptop, which I’d recently acquired, after a bus drove over the bag containing it. The next laptop crashed. Both had contained unsaved class material.

“Then in the middle of the year, during exam time, I lost my mother to cancer. I must confess that I had contemplated dropping out.”

He faced new challenges the next year. “When Covid-19 struck last year, the borders were closed and doing cross-border entrepreneurship, which is what I do to finance my studies, became almost impossible,” he said.

Mitole found himself in a perilous financial situation.

“My children’s school laid off staff and subsequently closed its doors, and a variety of circumstances forced my wife, Rachel, to resign from her job.

“After more than 300 applications, I was recruited by an in-house law school and did articles at a medium-sized Melrose Arch law firm.

“But a candidate attorney’s position does not pay much, and it did not offer the financial breakthrough that I had anticipated. At this point, I was in the thick of writing my thesis,” he said.

While his wife and children received their permits three years ago, Mitole’s permanent residence permit, which he had applied for in 2018, had not come through and is yet to materialise.

On the morning of May 26 Mitole felt tired and weak and went to hospital, going through Covid-19 screening and paperwork until midnight.

“It was a public hospital. My blood pressure was high. I sat on a bench in the emergency room until the following morning when I was finally seen by a doctor and given some medication. But by this time, my blood pressure was at its highest and my left limbs had become paralysed.”

Mitole had suffered a lacunar stroke.

“There was a small blood clot on the right side of my brain, which had caused the brain to stop sending messages to the left-side limbs,” he said.

After about a week in the hospital, he was discharged to begin rehabilitation treatment at a centre.

I was grateful that my brain, memory and motivation was fired up.

“I woke up at 4am every day and exercised most of the day, sometimes while other patients slept. I was on my feet walking around the hospital and using whatever gym facilities there were. There was a lot of support from family, friends and my workplace, but finishing the dissertation became a far-fetched dream.”

That was until he read a book called Everything is Possible by Jen Bricker.

“The book is about a young woman who was born without legs but had gone on to chase unimaginable dreams, including going skydiving and deep-sea diving. She talks about finding the faith and courage to follow your dream. I had no excuse. I had to get out of rehab and finish my dissertation,” he said.

Mitole often felt tired, had headaches and could use only one hand to type his dissertation — but he was undeterred.

“Two weeks later, in early July, I was discharged from rehab,” he said.

“By then, I had a submission date for my dissertation in order to graduate in September. When my supervisor recommended changes and more research, I would commence immediately, knowing my challenge had become speed and endurance. I was grateful that my brain, memory and motivation was fired up. I’d learnt how to do a lot of things with one hand: typing, cooking, bathing and dressing — to these, I needed to add speed.”

After everything he has been through, advising other students who may be facing adversity, he said: “Seek professional help if necessary. While in hospital, I met with psychologists, social workers, dietitians, occupational, physio, speech and audio therapists.

“This is aside from meeting neurologists, cardiologists and internal medicine specialists. And ensure that you have a strong support structure surrounding you.”