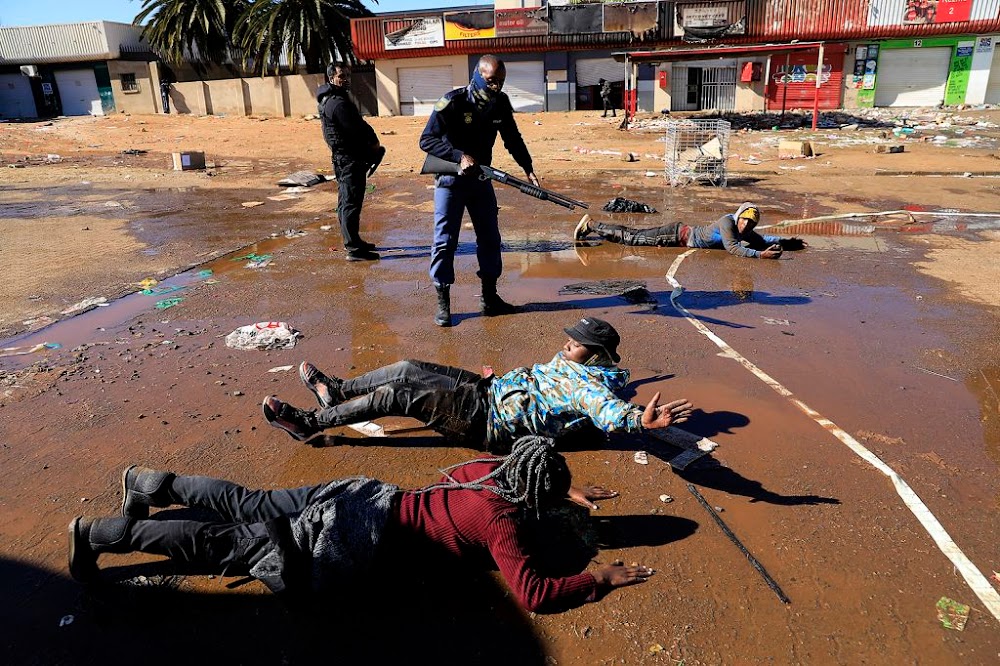 Sporadic looting in Gauteng seemed to have cooled down on Tuesday evening.

The military rolled through the streets of Alexandra, which were still littered with burnt tyres, rocks and other debris.

The flames in Alex belonged to soldiers keeping themselves warm in temperatures that dipped below zero.

Arrests, he said, were part of the solution, “but the time has come for us to chase the instigators and agitators”.

The terrifying sound of explosions could be heard in Durban on Wednesday morning as a blaze raged on Queen Nandi Drive.

Residents in the area could not confirm if the fire was at the Massmart warehouse or gas company Afrox.

The blaze started on Tuesday night.

‘We are going after the instigators’: Cele says there are forces behind mass looting

Sporadic violence and incidents of looting continued throughout areas in Gauteng on Monday night. Businesses in Soweto’s Diepkloof Mall awoke to their businesses ransacked and severely damaged.

The Diepsloot Residents' Association went on a door-to-door operation to recover items that were looted by community members from a nearby shopping centre.

Akim Zulu, the secretary of the association, said they received tip-offs on Tuesday morning on where the stolen items were within the community.

“When things happened, we had a meeting early in the morning and we decided to stay at Bambanani [mall] to stop community members from looting as there were some who wanted to go back to loot.

“We managed to get some information from residents, saying they saw some people running into the community from the mall. We then decided to a do door-to-door search to recover the items.”

All bets are off as looting shows no sign of stopping

Deadly protests in KwaZulu-Natal and Gauteng showed no signs of letting up on Tuesday even as the authorities pledged to clamp down on the violence and the army was deployed.

Hundreds of shops in the two provinces, which account for about half of SA’s economic output, were looted, and major highways have been blocked. KZN premier Sihle Zikalala put the death toll at 26 while his Gauteng counterpart David Makhura said there had been 19 fatalities, including 10 that occurred during a stampede at a Soweto mall.

Rioting continued in several Gauteng townships, including Alexandra, Diepsloot, Vosloorus and Mamelodi, although calm prevailed in Johannesburg’s city centre, which bore the brunt of the violence on Monday.

All bets are off as looting shows no sign of stopping

SA this week experienced probably the most destructive anarchic violence in its history. It appeared to be largely a consequence of the 15-month jail sentence meted out to former president Jacob Zuma by the Constitutional Court two weeks ago. But the irony of this clearly orchestrated and devastating mass brutality, which led to widespread looting, largely in KwaZulu-Natal and Gauteng, is that it probably is an extension of and connected to the unlawful mayhem which began in Nkandla last week in reaction to his sentencing.

After many hours of watching this shocking news on television and listening to the accompanying commentary, I found a distinct paucity in understanding of the causal factors underlying the widespread destruction of property, looting and violence. Even during the worst brutality of the apartheid era we did not see such horrendous and widespread looting.

'It's not about Zuma ... They're having a party': Joburg resident shares tale of living above deadly riots

For the past two days, Noma Vundla and her family and neighbours have been observing the carnage on the streets below their flat in Berea, Johannesburg.

What started as a protest against the imprisonment of Jacob Zuma has disintegrated into looting sprees and chaos in KwaZulu-Natal and Gauteng.

From the safety of their small home, this family, who escaped the poverty in their homeland in Plumtree, Zimbabwe, have witnessed many instances of looting and xenophobic violence before - but nothing like this.

"This time is bad. We aren't safe to walk around the streets. Looters are even looting from each other. I can't carry my groceries in case they get stolen - but I also can't find any groceries anyway. I keep my children locked away from everything. If they need to go outside they can stand on the balcony, but they must stay inside. I must also feed them. I can't find any food in the shops.

'It's not about Zuma ... They're having a party': Joburg resident shares tale of living above deadly riots

Deadly protests which are gripping Gauteng and KwaZulu-Natal’s towns and cities are set to create a potentially devastating cash crisis, with cash-in-transit companies stopping the collection and delivery of money to businesses and ATMs.

On Tuesday, after wide-scale looting overnight which saw banks and ATMs broken into and millions of rand in cash stolen, G4S announced that because of the volatile situation, it had “scaled back” cash collection and delivery services in affected areas.

The announcement followed a similar decision by Fidelity Cash Management Services, which on Monday announced that because of raids on banks and ATMs at shopping malls, it was stopping services.