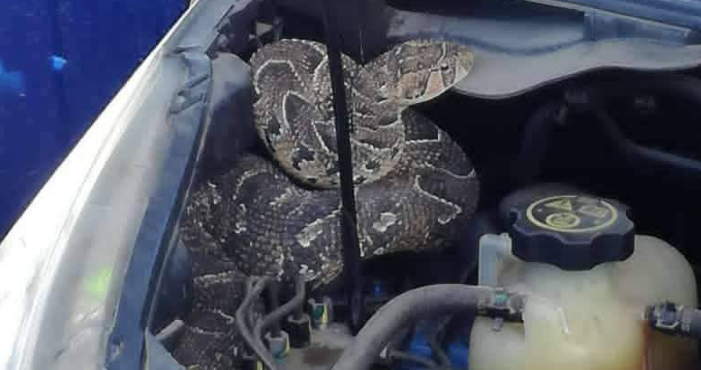 Forget snakes on a plane. Watch out for the one hiding in your car bonnet.

A Knysna man recently got a huge fright when he stopped at a filling station and opened his bonnet to find a snake inside.

A picture of his discovery was shared by Arrive Alive on social media over the weekend, leaving followers with the chills.

A surprise discovered after a guy reportedly stopped at a filling station in Knysna https://t.co/Jd7T8vKWs9 #ArriveAlive #Snakes pic.twitter.com/zRPJlqAGDD

“While most people avoid contact with snakes at all costs, encounters with snakes are inevitable. Snakes will often try to avoid a confrontation with a human.

“Most snake venom does not have serious effects on humans. However, after being bitten by a snake medical advice must be sought. Don’t wait for symptoms to develop before seeking help,” he said.

The post drew a flood of reaction, with many saying they would run or “simply evaporate” if it had happened to them.

“Imagine at the petrol station. You would wonder why everyone is running away. Reminds me of the day I suspected there was a snake hiding in there (the bonnet) as dogs were scratching the car. I took the car for a car wash and told them to wash the engine too.

“I walked away so I could watch from a distance. As the guy sprayed the engine a cat ran out. Everyone started screaming and running away. Some ran because they saw others running.”

Another user, George Mapena, joked that the snake was “hitching a free ride” because Covid-19 had hit hard and there was “no money”.

“He's tired of crawling so he hitched a ride to town,” Benjamin Madimetse added.

Yoh i’d leave that car there and walk back home

Shame, it was probably attracted by the heat of the engine.

That between life and death, petrol att need to carefull all the times

Fcuk me dead. Puffy. I’d die on the spot.