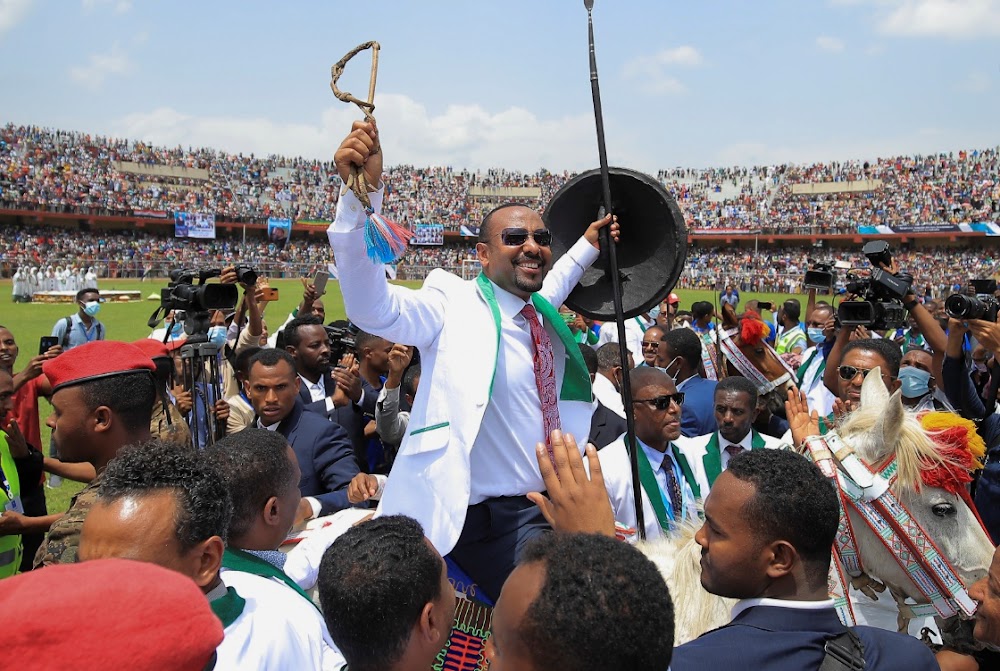 Ethiopia will show a sceptical world that it can successfully hold a peaceful election next week, Prime Minister Abiy Ahmed told a crowd of tens of thousands of supporters at his first — and last — campaign rally on Wednesday.

The June 21 vote is the first time Abiy, 44, will face voters at the ballot box in Africa's second most populous nation. He tweeted this week that the election “will be the nation's first attempt at free and fair elections”.

“The whole world is saying we will fight but we will show them differently,” Abiy told a packed stadium in the western city of Jimma. “The forces that saved Ethiopia from collapsing will turn the Horn of Africa into Africa's power hub.”

Just over a fifth of parliamentary constituencies are not voting due to logistical problems, low-level violence or due to the war in the northern region of Tigray.

“I will vote for Abiy because he is creating many jobs, building schools and roads,” said Hawi Aba Jihad, 21, a motorised three-wheel taxi driver at the rally.

But many parties in Oromiya, the nation's most populous region and the site of Wednesday's rally, are boycotting the polls, alleging government intimidation.

Regional spokesperson Getachew Balcha referred queries to the police commissioner, Ararsa Merdasa, who did not respond to questions on those accusations.

Abiy rode a wave of optimism to become prime minister with a message of unity and reform after years of bloody antigovernment demonstrations forced his predecessor to resign.

His appointment sparked hopes that one of the continent's most repressive governments would speed up democratic and economic reforms.

Within months of taking office in 2018, Abiy freed more than 40,000 political prisoners, said Fisseha Tekle of Amnesty International. He unbanned political parties and signed a peace deal with neighbouring Eritrea, winning the Nobel peace prize for ending more than two decades of conflict.

He also began opening the sclerotic state-run economy to outside investors, starting with telecoms.

But now the jails are filling up again, according to Amnesty, which Fisseha said has documented “tens of thousands of people” held in military camps. After freeing all jailed journalists when he came to power, Abiy's government has detained more than 20 in the past year.

“The situation now is as dire as it used to be before the appointment of Prime Minister Abiy — if not more,” said Fisseha.

Billene Seyoum, the prime minister's spokesperson, did not respond to requests for comment, but previously told Reuters that the environment for journalism was “favourable” and that “there is no perfect environment; however, it cannot be said that a nascent democracy like Ethiopia is regressing.”

As Abiy entered the stadium for Wednesday's rally, people chanted “Abiy is ours, the dam is ours” — a reference to a $4 billion hydropower dam on the Blue Nile that has sparked a dispute with Egypt and Sudan.

The other two nations fear Ethiopia could interfere with the Nile's waters, which are provide 90% of Egypt's population with freshwater. Ethiopia says it needs the electricity from the dam to lift its people out of poverty.

Ethiopia has also come under increasing international pressure amid mounting reports of atrocities in the conflict that broke out in Tigray in November between federal troops and the Tigray People's Liberation Front (TPLF), the region's then-ruling party.

Both Ethiopian and Eritrean troops — who entered Tigray to support the government — are accused of abuses that include gang rapes and mass killings of civilians.

Eritrea spent months denying its troops were in Tigray, but since acknowledging their presence has repeatedly denied any accusations of atrocities.

Ethiopia says its state-appointed human rights commission is conducting a joint investigation with the United Nations and anyone found responsible for abuses will be held to account.

The government has said it has put more than 50 soldiers on trial for rapes and killings, but has not provided any details of the cases. The US has put restrictions on its development aid and the European Union has also suspended budget support.

Abiy's rhetoric has also changed. While inaugurating a sugar factory in the northern Amhara region on June 6, he told supporters that Ethiopians face two challenges — “traitors and outsiders”.

“Everyone is expected to first purge traitors and next to stop outsiders,” he said.