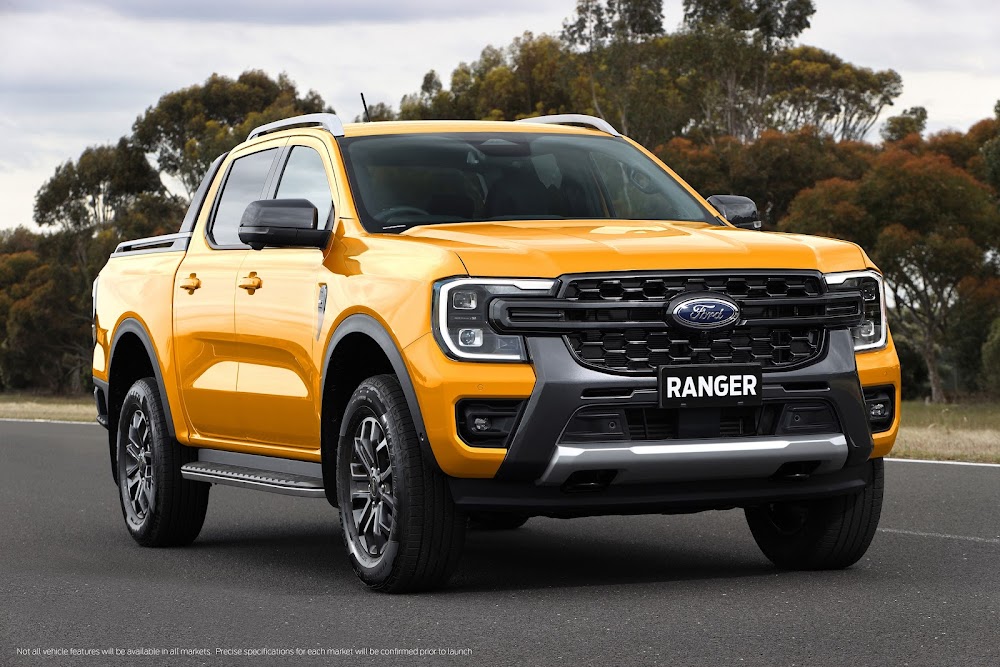 With butch new looks, more power and smart new features, the one-tonner will be built at Ford SA’s plant in Silverton for the local and export markets in a R15.8bn investment. The plant will also manufacture the next-generation Volkswagen Amarok on a shared platform with the new Ranger.

The goal was to make this Ranger the toughest and most capable yet created by Ford, says Graham Pearson, Ranger vehicle programme director.

“They put it through one of the most exhaustive global testing schedules we’ve ever developed and would not rest until we were satisfied it was Built Ford Tough.”

The new Ranger looks like the pickup that will steal other bakkies’ school lunches. It adopts a “tough truck” design inspired by the larger Ford F-150 with its assertive grille and C-clamp headlights, and more muscular side with flared wheel arches for a greater impression of strength. For the first time, the blue oval bakkie offers matrix LED headlights.

Inside, a more car-like cabin has been created with premium soft-touch materials, a huge portrait-style 10.1-inch centre touchscreen with Ford’s Sync 4 connectivity and entertainment system, and a fully digital instrument panel to replace the old analogue one. A 360 degree camera aids with parking or negotiating tricky terrain while out exploring.

A new exterior zone lighting system gives 360 degree lighting around the bakkie so owners don’t have to stumble around in the dark when camping, for instance.

Beneath the new bodywork is an upgraded chassis riding on a wheelbase 50mm longer and a track 50mm wider than the outgoing Ranger. The front wheels are moved forward for a better approach angle, and outboard for better off-road articulation.

The suspension retains an independent setup with coil springs at the front and a live axle with leaf springs at the rear, but has been updated to deliver a more comfortable ride with increased axle articulation for improved off-road capability.

There is more muscle power too, with the Ranger getting an adapted version of the 3.0l V6 turbo diesel engine that powers the F-150. Ford hasn’t yet revealed how outputs will differ from the 185kW and 596Nm of the F-150.

The next-gen Ranger will also come with a choice of bi-turbo and single-turbo 2.0 four-cylinder diesels — the latter available in two different performance levels.

In addition, the new Ranger will be available with the 2.3l EcoBoost four-cylinder turbo petrol engine that propels a number of Ford models including the Mustang.

Ford wouldn’t reveal whether a rumoured petrol-electric hybrid derivative would later be added to the line up. It also had no news to share on a Raptor version, although there will almost certainly be one given the popularity of this rally-bred model.

There will be a choice of two four-wheel drive systems: an electronic shift-on-the-fly system, or a full-time 4x4 system with a set-and-forget mode.

The 50mm wider load bay takes a full-size pallet, and a new integrated side-step behind the rear wheels — like in the old Bantam half-tonner — allows the load box to be accessed easily. A cargo management system uses dividers to hold various sized items, including smaller ones that would otherwise have to go in the cab.

The next-generation Ranger will be built at Ford’s plants in Thailand and SA beginning in 2022, with other markets to be announced at a later date. More details, including when the vehicle will be launched in SA, will be announced in due course.