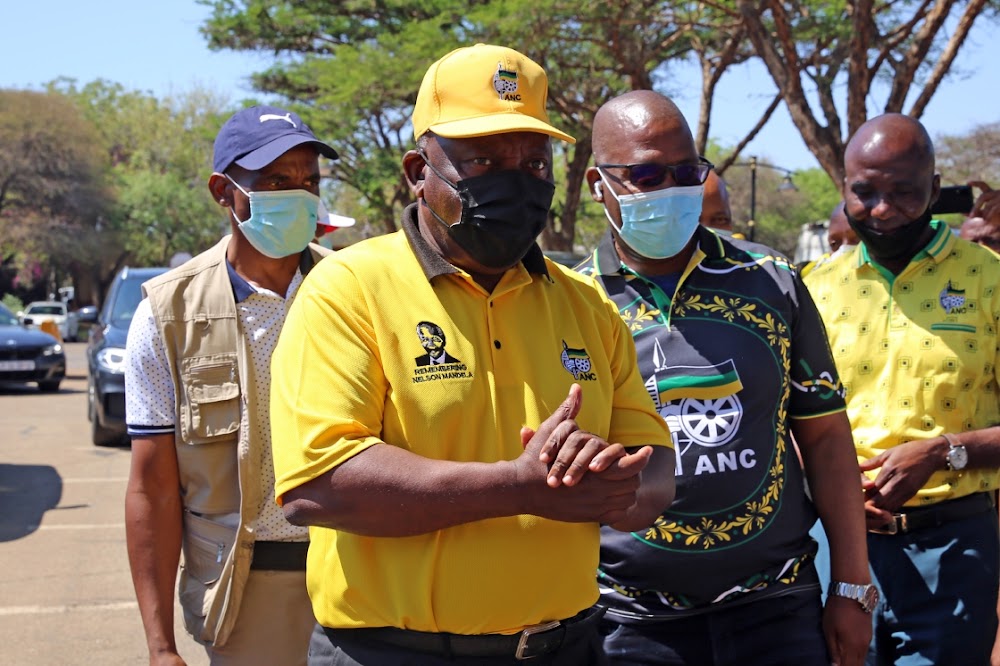 ANC president Cyril Ramaphosa avoided any interaction with the media on Friday after Thursday's hostage drama in which military veterans held ministers Thandi Modise and Mondli Gungubele against their will at the St George's Hotel in Pretoria.

Instead, Ramaphosa focused on campaigning when he visited Tshwane with just over two weeks before the November 1 local government elections.

Before Ramaphosa spoke in searing heat in the Mabopane’s Reatlegile voting district, the ANC’s deputy chairperson in Gauteng, Panyaza Lesufi, observed a moment of silence for slain councillor Tshepo Motaung, who was shot 22 times last month.

To those responsible, Lesufi said: “They can run, but you cannot hide. We will find them.”

Ramaphosa told residents that on November 1 “we will see which party will govern Tshwane. Will it be a Mickey Mouse party or a party that knows that it is boss?”

He reminded the crowd — which gave him a warm welcome — that in 2016 people did not go out to vote, which led to the DA-led coalition government.

“If we tell the truth, we are in this trouble in Tshwane because we did not go out and vote. We will accept that in the ANC there was infighting and no one was listening to anybody,” he said.

Conceding that the party had erred, he said, “We have made some mistakes in the past and we are now changing. We are in the process of renewal.

“We are going to bring about changes in Tshwane, we are going to make sure that there is service delivery. People are complaining about the lack of houses, water, electricity and unemployment. We heard you.”

Ramaphosa said the ANC was working to create jobs for the youth. “We know the needs of our people. We know that they want us to move forward. I noticed that this place is so filthy. The problem is that the municipality that is governing does not care about the people. It has become very clear that this municipality is looking out for the interests of a few people.”

In Ga-Rankuwa ANC President Cyril Ramaphosa was met with anger. Residents demanded that their grievances be met. The crowd kept disrupting the president while he was speaking. @TimesLIVE pic.twitter.com/kJDksAig5M

He called on members to join him “in rebuilding a strong and united ANC. No more must Tshwane be under the hands of any other party, other than the ANC.”

After his remarks Ramaphosa’s bodyguards closed ranks around him and whisked him away to Brengaville informal settlement in Ga-rankuwa, where he visited several families.

Around midday, he made his way to a small sports ground nearby where his speech was interrupted by residents who hurled insults at the local councillor.

With a smile on his face Ramaphosa, who seemed to lose his cool, said sternly: “Keep quiet. You are drunk.” He then jokingly added: “When it is this hot and you drink alcohol, it is fermenting inside you and drives you crazy.”

He also told residents to put down their placards as he had seen them. Again, after the address on the back of a ANC campaign van, Ramaphosa’s convoy sped off to the next stop.

In Soshanguve, his message was no different. He told residents that if they fail to win Tshwane, “they [the coalition] will govern again and things will go from bad to worse”.

In another area of the township, he told a community meeting: “This time around I want us to win Tshwane outright, we don’t even want a coalition with all these other parties.

“When you are in a coalition with other parties, it’s like you have two bulls in a kraal ... The coalitions are a big problem because once you are in a coalition, there is no development. You spend the greater part of your time fighting among yourselves for positions and in the end you are both paralysed.”

Ramaphosa also used his campaign appearances to remind people to get vaccinated against Covid-19. “Minister of health Dr Joe Phaahla announced that children from the age of 12 and 17 are now eligible to get vaccinated. Please take your children,” he said.

After his last stop Ramaphosa left the venue promptly. ANC national spokesperson Pule Mabe said Ramaphosa would not be interacting with the media on Friday.