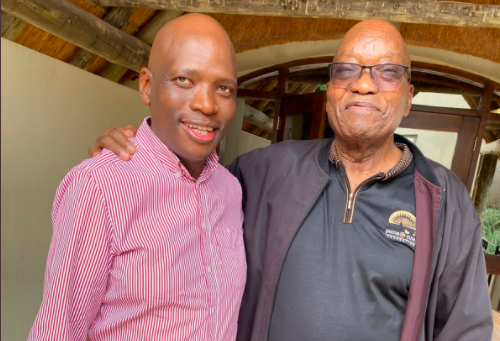 The number of prominent figures paying former president Jacob Zuma a visit at his Nkandla homestead in KwaZulu-Natal continues to grow.

According to snaps shared on Twitter by Zuma’s daughter  Duduzile, the latest “tea dates” took place on Friday and Saturday.

Duduzile described Motsoeneng as “a visionary who led the SABC, paid salaries and never retrenched anyone”.

“Thank you for putting SA first. We miss you at SABC,” she said.

She said the BLF’s visit to Nkandla was to express solidarity with Zuma.

“They spoke serious political analysis of SA. A clear declaration of support by BLF for Zuma to continue to defy the [state capture] commission if [deputy justice Raymond] Zondo does not recuse himself,” said Duduzile.

Today Black First Land First Top Brass will have #nkandlaTea with @PresJGZuma
BLF has been unapologetic about Their support of Pres Zuma. Thank u Pres Mngxitama. We remember Steve Biko, through your teachings. We do need Land. Andile Mngxitama Will once again shake the enemy. pic.twitter.com/GfMJvUl0U3

BLF visit is to express solidarity with @PresJGZuma in the face of the attacks by WMC and some enemy agents. They spoke serious political analysis of SA.
A clear declaration of support by BLF for @PresJGZuma to continue to defy The Commission if Zondo does not recuse himself pic.twitter.com/xWIQnLRHB5

Mngxitama said it was a privilege to have access to Zuma and they do not take it for granted.

“In 2019, BLF met uBaba in Durban. We handed him the gift of the instrument of war. Now we go deep into the belly of KwaZulu-Natal,” he said.

“This time we want to talk about what’s to be done because safa saphela isizwe esimnyama (the black nation died out). We’re going to get the marching orders because we are loyal soldiers. We have stood with Msholozi when it was not fashionable to do so.”

Other guests who have visited Zuma include EFF leader Julius Malema, members of the Umkhonto we Sizwe Military Veterans Association (MKMVA) and police minister Bheki Cele.

Former SAA chairperson Dudu Myeni recently gifted Zuma with groceries to feed those who have been visiting his home.

BLF, ATM, Hlaudi’s party are all extensions of Zuma’s RET faction. The aim was to test the waters during elections and they failed dismally

I think Hlaudi's visit is the one that Jacob Zuma enjoyed the most. Funny guy that Hlaudi

Did she live in Dubai when the SABC radios and TV stations were losing revenue because of the 90% local quotas?

She's as dumb as Zuma? Definitely his daughter.

BLF is visiting Nkandla today to have tea with Zuma

Yesterday it was Hlaudi Motsoeneng

I think the old man is ailing, SA must give this man a break with the tea visits, he’s not young anymore

His tail between his legs..