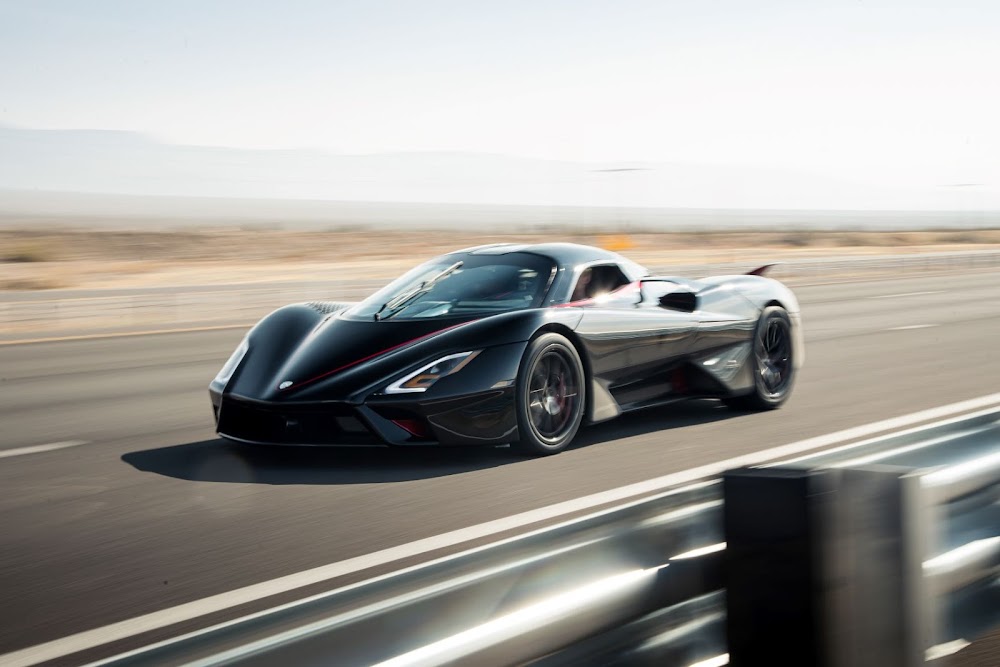 The SSC Tuatara is now officially the world's fastest production car after setting an average top speed of 508.73km/h over two runs down an 11km stretch of road just outside Las Vegas, Nevada.

Piloted by experienced British racing driver Oliver Webb, this American-built hypercar clocked 484.53km/h on its first run and 532.93km/h on its second.

In accordance with strict record criteria, the runs had to take place in opposite directions and within an hour of each other. Officials were present to make sure the rules were upheld and advanced GPS logging equipment was used to track and verify the car's incredible velocity.

Faster than a Bugatti Chiron SuperSport and running on standard street tyres, the SSC Tuatara features a lightweight carbon fibre monocoque chassis and a bespoke 5.9-litre twin-turbo, flat-plane crank V8 engine that produces 1,007kW on regular petrol (which was used during the record attempt) and 1,305kW when filled with E85 racing fuel.

That power is transferred to a CIMA 7-Speed computerised manual transmission working in unison with a state-of-the-art Automac AMT system that operates the engagement and selection of movement in the gearbox.

Interestingly enough, this isn't the first car SSC has built that has made headlines. In 2007 its Ultimate Aero averaged 412.21km/h, making it the world's fastest production car until it was trumped by the Bugatti Veyron Super Sport in 2010.

“It’s been 10 years since we held this record with our first car, the Ultimate Aero, and the Tuatara is leagues ahead,” says Jerod Shelby, CEO of SSC. “Its performance reflects the dedication and focus with which we pursued this achievement.

“We came pretty close to meeting the theoretical numbers, which is astonishing to do in a real world setting on a public road. America’s new claim to victory in the ‘land-based space race’ is going to be tough to beat.”

As fast as the SSC Tuatara may be, driver Webb believes it can go quicker.

“There was definitely more in there,” he commented after the run.

“And with better conditions, I know we could have gone faster. As I approached 331mph (532.69km/h), the Tuatara climbed almost 20mph (32.18km/h) within the last five seconds. It was still pulling well. As I told Jerod, the car wasn’t running out of steam yet. The crosswinds are all that prevented us from realising the car’s limit.”

In addition to the fastest production vehicle record, the SSC Tuatara broke the world records for: