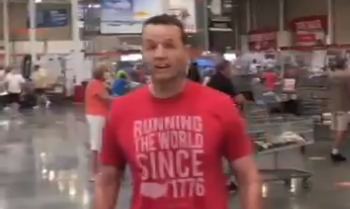 A video of a Florida man threatening an elderly woman who asked him to wear a mask, has been viewed more than 11 million times since it was posted by filmmaker, Billy Corben on Tuesday.

The man captured on the video has been identified as Daniel Maples.

The second man who can be heard in the background during a heated exchange with Maples was defending the elderly woman from Maples.

Maples then accused the man of harassing and threatening him for telling him to wear a face covering. As he steps closer to him, Maples demands that he stops recording the incident and says “back the f## up, put your phone down.”

Florida man at Fort Myers Costco in "Running the World Since 1776" shirt flips out on elderly woman who asked him to wear a mask and man who defended her #BecauseFlorida (via @profjaffar) pic.twitter.com/PDOvi33qHK

According to Corben, the incident happened at the Gulf Coast Town Centre. A customer who was also allegedly targeted told him that store management made sure they were escorted out and safe.

Rocky Olah, another shopper who witnessed the incident told WCJB, a local publication affiliated to ABC News, that the man was selfish and unfair.

“They're just trying to protect their loved ones, so I kind of find it selfish if he doesn't have his mask on and someone asks him politely, you know.”

Maples, was an insurance salesman who was fired by his company, Ted Todd Insurance soon after the video went viral.