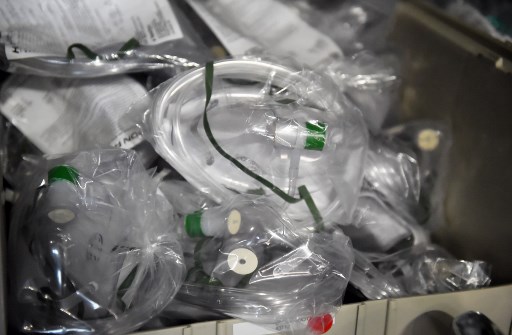 As the coronavirus pandemic bears down on vulnerable nations in Africa and South Asia, experts say there are only weeks to help fill chronic shortages of what medics need to help people breathe.

Not ventilators, but oxygen itself.

Medical oxygen is a core component of the life-saving therapies hospitals are giving patients with severe cases of COVID-19, as the world waits for scientists to find vaccines and treatments.

The pandemic has pushed even the most advanced health systems to their limits, with concerns often focused on the supply of mechanical ventilators at the high-tech end of the breathing assistance spectrum.

But experts fear this has distorted the narrative about what constitutes an effective response, giving the wrong blueprint for nations with under-funded health systems.

"The reality is that oxygen is the only therapy that will save lives in Africa and Asia-Pacific now," said Hamish Graham, a consultant paediatrician and research fellow at Melbourne University Hospital and International Centre for Child Health.

"I fear that undue focus on ventilators without fixing oxygen systems will kill."

One report in February on thousands of cases in China's epidemic found that nearly 20 percent of patients with COVID-19 required oxygen. Of those, 14 percent needed some form of oxygen therapy, while a further five percent required mechanical ventilation.

In severe cases of COVID-19, the virus attacks the patient's lungs in the form of pneumonia, causing inflammation that prevents them from absorbing oxygen.

This can cause their blood oxygen levels to fall well below normal, a condition known as hypoxaemia that can deprive critical organs of oxygen and "substantially" increase the risk of death, Graham said.

"In hospitals in high-income countries, we take oxygen for granted," he told AFP.

"In low-resource settings, healthcare workers are acutely aware of the challenges as they fight to get oxygen to patients every day."

Many larger hospitals across Sub Saharan Africa and South Asia will have some oxygen cylinders in operating theatres and wards, as well as concentrators -- portable devices that filter and purify the surrounding air.

But surveys throughout Africa and Asia-Pacific have shown that less than half of hospitals have oxygen available on wards at any given time, Graham said, and even fewer have the pulse oximeters that allow medical staff to measure blood oxygen levels and guide dosages.

Oxygen supply has long been a source of alarm among specialists who treat pneumonia, the world's biggest preventable infectious killer of children under five.

In Nigeria, one of the worst-affected countries, the government introduced a national policy several years ago to improve pneumonia treatment, but experts say it has not trickled down to a regional level.

Adamu Isah, who leads Save the Children's work on pneumonia in the country, said the charity recently assessed primary healthcare facilities in two states and found that oxygen supplies were "really, really concerning".

A former clinical physician, Isah said it was common to see children "suffering and gasping".

"If you don't have something like an oxygen system you find yourself helpless, there's really not much you can do," he told AFP.

A 2018 report published by Every Breath Counts, a coalition of UN agencies, businesses, donors and aid agencies, said supplies of oxygen were "severely limited" in countries across South Asia and Sub-Saharan Africa.

It cited surveys that suggested only one in 10 children with pneumonia in Nigeria received the oxygen they needed. In Ethiopia, research found that while 64 percent of hospital paediatric wards had oxygen supplies, only 14 percent had health workers trained to use them or standard operating procedures.

Leith Greenslade, the lead coordinator for Every Breath Counts, said the mining industry often has better oxygen supplies for its workers than under-funded hospitals.

"These health systems in Africa and South Asia could not be more exposed to a pandemic like this one because they haven't been investing in respiratory therapy," she told AFP.

"This is what terrifies me."

Despite pneumonia killing 800,000 children a year globally, campaigners say it has not been given the same attention as other infectious diseases like HIV, Malaria and TB.

Greenslade said global health authorities have also "completely neglected" oxygen, and this means there is very little information about supplies.

"The absence of global data on this is going to be a major problem trying to respond to COVID-19 because we are flying blind, we really don't know which countries are in more desperate need than the other," she said.

The pandemic is still largely in its early stages in Africa and parts of Asia, giving the international community "probably a two-month window" to act, she added.

While it is still unclear how the new coronavirus will spread in poorer nations, there are acute fears over densely populated cities and refugee camps.

Experts say there is no one-size-fits-all approach, urging low income countries to go beyond lockdowns and urgently scale up basic health systems.

"Like everywhere, flattening the curve is the idea, but if your health system doesn't have any intensive care beds -- or, like Malawi, has got 25 beds for 17 million people -- you can't flatten the curve to the extent that'll work," said Gwen Hines, Save the Children's executive director for global programmes.

Malawi, one of the poorest countries in Africa, has started to record cases of COVID-19, but a court last week temporarily blocked a government lockdown order.

Hines said her organisation has worked on providing solar powered concentrators to the country, which has intermittent electricity, no domestic oxygen plant, and often struggles to secure imports of medicines.

The mechanical ventilators used in well-funded health systems are the "wrong focus" for resource-poor countries, where they would have little impact, said David Lalloo, head of the Liverpool School for Tropical Medicine, which also has a large programme in Malawi.

He said the international community should instead prioritise oxygen supplies and protective equipment for health workers.

Experts fear the international community may not act fast enough, as cases rise in Africa and Asia at the same time as Europe and the United States hit their peaks.

But Graham said it was also crucial for the response to be more strategic than "buying equipment and dumping it on hospitals", urging proper staff training and maintenance.

In Nigeria, Isah said his wish-list of equipment would start simple, with pulse oximeters, then oxygen concentrators that can be used in small healthcare settings, and finally higher-tech equipment like ventilators.

But he said a "major fear" was competition in global supply chains for even basic devices.

He called for "solidarity and collaboration" with richer nations helping those that are struggling to tackle COVID-19.

"My fear is if this COVID pandemic stays longer than a couple of months, we will face very serious problems, there will be loss of so many lives," he said.

"Countries in Europe and the US and other places, they may have the financial capacity to address the need, or they could get support easily, but in Africa we don't have those resources, even in peacetime." Coronavirus by Tiso Blackstar Group - Infogram

Mikhail Red On Making Movies for the Now