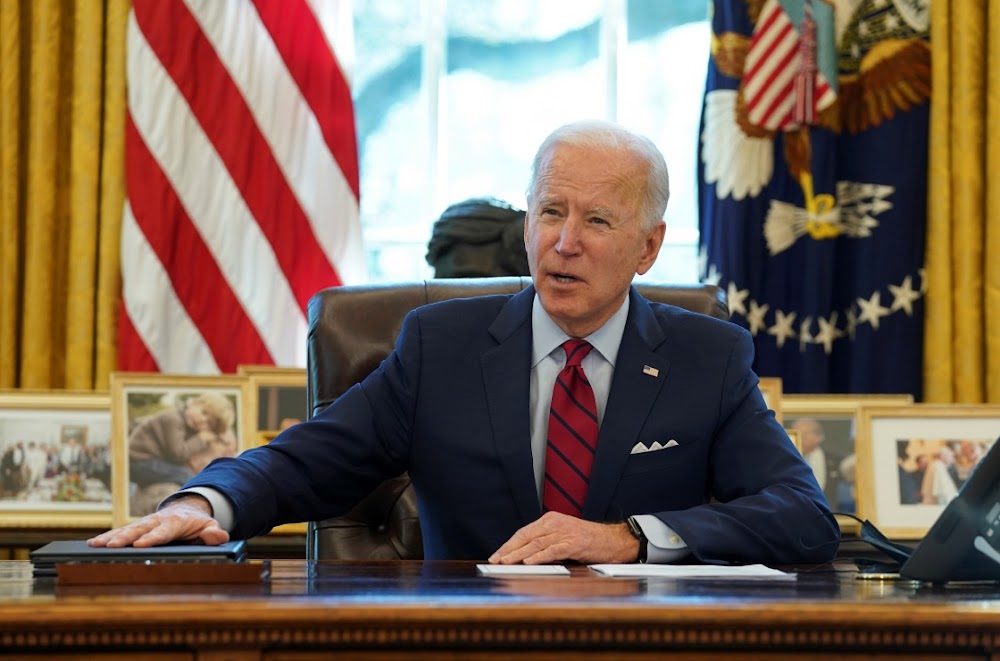 Ten moderate Republican US senators urged President Joe Biden on Sunday to significantly downsize his sweeping $1.9 trillion Covid-19 relief package to win bipartisan support as Democrats in Congress prepared to push ahead with his plan this week.

Biden responded by inviting the Republican lawmakers to the White House this week for talks, spokesperson Jen Psaki said, even as he continues to seek a comprehensive, large-scale measure.

“With the virus posing a grave threat to the country, and economic conditions grim for so many, the need for action is urgent, and the scale of what must be done is large,” Psaki said in a statement.

Biden spoke to Republican Senator Susan Collins on Sunday, Psaki said, asking her and the other Republicans to come to the White House for “a full exchange of views.”

The meeting was scheduled for Monday afternoon, the senators said in a statement.

Earlier, a top White House economic adviser signalled willingness to discuss the ideas raised by the Republicans, who have floated a $600 billion alternative.

But Brian Deese, director of the National Economic Council, told NBC's “Meet the press” program that the Democratic president was not willing to compromise on the need for a wide-ranging bill to address the public health crisis and economic fallout.

Passage of the new relief legislation would not only affect Americans and businesses reeling during a pandemic that has killed about 440,000 people in the US but offer an early test of Biden's promise to work to bridge the partisan divide in Washington.

It remained unclear whether the outreach by fewer than a dozen of the 50 Republicans in the 100-seat chamber would shift plans by congressional Democrats to take up legislation in the coming days. Biden and fellow Democrats are seeking to make use of their control of the House of Representatives and Senate to move quickly on the president's top goal of addressing the pandemic.

Senate Majority Leader Chuck Schumer has said his chamber would begin work on it as early as this week. House Speaker Nancy Pelosi said Congress would complete a preliminary step before the end of the week.

Biden, who took office on Jan. 20, has proposed $160 billion for vaccines and testing, $170 billion for schools and universities, and funds to give certain Americans a $1,400-per-person stimulus cheque, among other provisions.

Some Republicans have questioned the overall price tag, while others urged more targeted measures, particularly over the direct payments to individuals. Congress enacted $4 trillion in Covid-19 relief last year.

In their letter to Biden, Collins, Lisa Murkowski, Mitt Romney and seven other senators asked Biden for a meeting and said their compromise plan could be quickly passed with bipartisan support, promising more details on Monday.

They said their bill included more targeted assistance for families in need and additional funds for small businesses, while echoing Biden's $160 billion for more funding to boost vaccines and testing. They also pointed to unspent money from previous COVID-19 relief bills.

“We're targeted to the needs of the American people,” Senator Bill Cassidy, one of the 10 senators, told the “Fox News Sunday” program.

Cassidy added that their plan included less school funding, saying many private schools had already reopened and that “the real problem is public schools” and “teachers' unions telling their teachers not to go to work.”

Fellow Republican Rob Portman, who also signed the letter, told CNN's “State of the Union” program that direct cheques should be limited to individuals making $50,000 and less and families making $100,000 or less.

The 10 Republicans, who also include Shelley Moore Capito, Todd Young, Jerry Moran, Mike Rounds and Thom Tillis, endorsed keeping extra federal unemployment aid amid the pandemic at $300 a week versus Biden's proposed $400 a week. Portman questioned the need for the Biden plan's extension of enhanced unemployment aid through September, noting: “We don't know what the economy is going to look like” then.

The US leads the world in Covid-19 cases and deaths by a large margin. Public health experts have urged an immediate scaling up of lagging vaccination efforts as new problematic variants of the novel coronavirus emerge.

At $1.9 trillion, Biden's plan “is scaled to have the punch to finally put these dual crises behind us,” Jared Bernstein, a member of Biden's Council of Economic Advisers, told “Fox News Sunday,” referring to virus control and economic relief.

Biden “is absolutely willing to negotiate,” Bernstein added, but said more details of the Republicans' proposal were needed.

Some moderate Democrats also have urged changes to Biden's package, while more liberal Democrats want more spending and other provisions such as a federal minimum wage increase to $15 an hour — more than double the current $7.25-an-hour rate.

With the Senate split 50-50 and vice-president Kamala Harris wielding the tiebreaking vote, Democrats are considering using a parliamentary tool called “reconciliation” that would let the chamber approve the legislation with a simple majority. Under Senate rules, legislation usually requires 60 votes for passage.

'This is their blood': Civil rights lawyer Crump fights for George Floyd's family

S.Korea to resume wider use of AstraZeneca coronavirus vaccine, exclude people under 30

Police officer killed in vehicle attack on US Capitol