Muslims start Ramadan under lockdown as US beefs up virus support 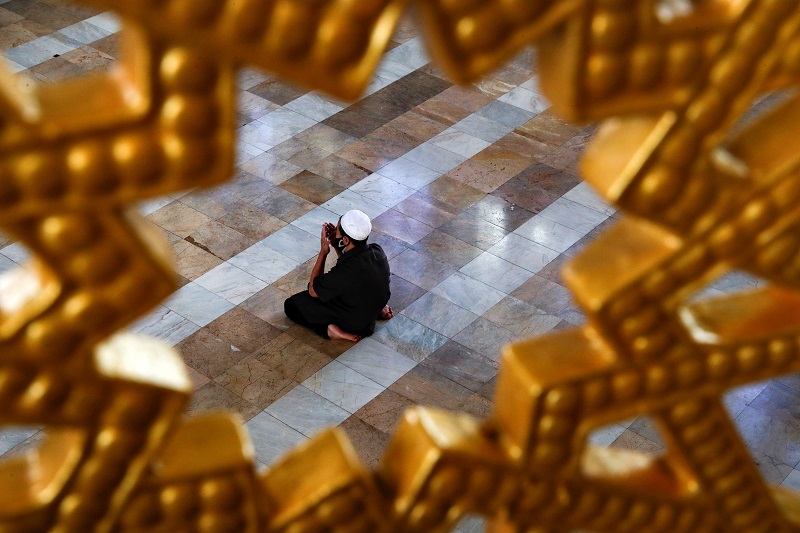 Muslims across the world began marking the holy month of Ramadan under unprecedented coronavirus lockdowns on Friday as the US added another half a trillion dollars to its already-massive support package to help its pandemic-ravaged economy.

The virus has upended life around the planet as nations try to stop the spread of the disease that has so far claimed nearly 190,000 lives, infected close to 2.7 million people and hammered the global economy.

Ramadan spirits have been dampened by movement restrictions in Muslim communities from Southeast Asia to the Middle East and Africa, with bans on prayer in mosques and large gatherings of families and friends to break the daily fast -- a centrepiece of the month.

But despite the coronavirus threat, clerics and conservatives in many countries including Bangladesh, Pakistan and Indonesia -- the world's largest Muslim-majority nation -- have pushed back against social distancing rules, refusing to stop prayer gatherings in mosques.

Several thousand people attended evening prayers on Thursday at the biggest mosque in the capital of Indonesia's conservative Aceh province, and there were similar scenes at many sites in Pakistan.

The World Health Organization has called for a stop to some Ramadan activities to lower the risk of infections, and authorities in several countries have explicitly warned of the threat from large religious gatherings.

There have already been explosions of coronavirus cases from three separate Islamic congregations in Malaysia, Pakistan and India since the virus first emerged late last year in China.

Distancing measures and the severe economic impact of the pandemic has also meant many charitable activities during Ramadan, especially food distribution and other donations, have been hit hard.

Salah Jibril, an unemployed Palestinian man who lives with his wife and six children in a cramped two-bedroom apartment in the Gaza Strip, said he was not sure how his family would cope without Ramadan donations.

"The markets and mosques are closed. The good people who give us money or aid each Ramadan are facing a tough situation," he said.

"This is the hardest Ramadan we have faced. We don't know how we will cope."

The economic devastation wreaked by lockdowns that have half the planet indoors is huge, with the world facing its worst downturn since the Great Depression.

US lawmakers covered their faces with masks and voted in small groups to approve a $483 billion stimulus plan, on top of the $2.2 trillion package already enacted.

The money will back small businesses on the brink of bankruptcy, and hard-pressed hospitals, as the American economy reels with more than 26 million people losing their jobs since the pandemic hit.

The United States is now the worst-affected nation in the world, with about 50,000 coronavirus deaths.

In Europe, leaders haggled by video conference over their own package that could top one trillion euros, as the European Central Bank chief warned of the risk of "acting too little, too late".

The 27-nation European Union agreed to ask the bloc's executive arm to come up with a rescue plan by May 6, sources told AFP.

The fight has reopened the wounds of the 2009 economic crisis in debt-laden European southern states such as Spain and Italy, both badly hit by the pandemic, demanding help to get back on their feet.

Richer northern countries like Germany and the Netherlands say they are ready to help for now, but insist they will not pool debt with Mediterranean governments they accuse of profligacy.

While the disease appears to be peaking in Europe and the United States, other nations are still in the early stages of the fight.

The World Health Organization has warned that strict measures should remain until there is a viable treatment or vaccine.

The race is on around the world to develop one, with Oxford University launching a human trial of a potential vaccine on Thursday. Germany announced similar trials will start by next week.

In a briefing at the White House, scientists said they had found that the virus was quickly destroyed by sunlight, raising hopes that the pandemic could ease as the northern hemisphere summer approaches.

"Our most striking observation to date is the powerful effect that solar light appears to have on killing the virus, both surfaces and in the air," said William Bryan, science and technology adviser to the secretary of the Department of Homeland Security.

Their findings, however, have not yet been released and therefore not reviewed by independent experts.

The rapid pace of development efforts is in part down to the vast numbers of patients that have overwhelmed healthcare systems in the developed world and in poorer countries.

In Brazil, where intensive care units at hospitals have been slammed, Dr Fernanda Gulinelli said this "is a new chapter in medicine that we are having to write on the go, and we don't know what the next sentence will be". Coronavirus by Tiso Blackstar Group - Infogram

Mikhail Red On Making Movies for the Now