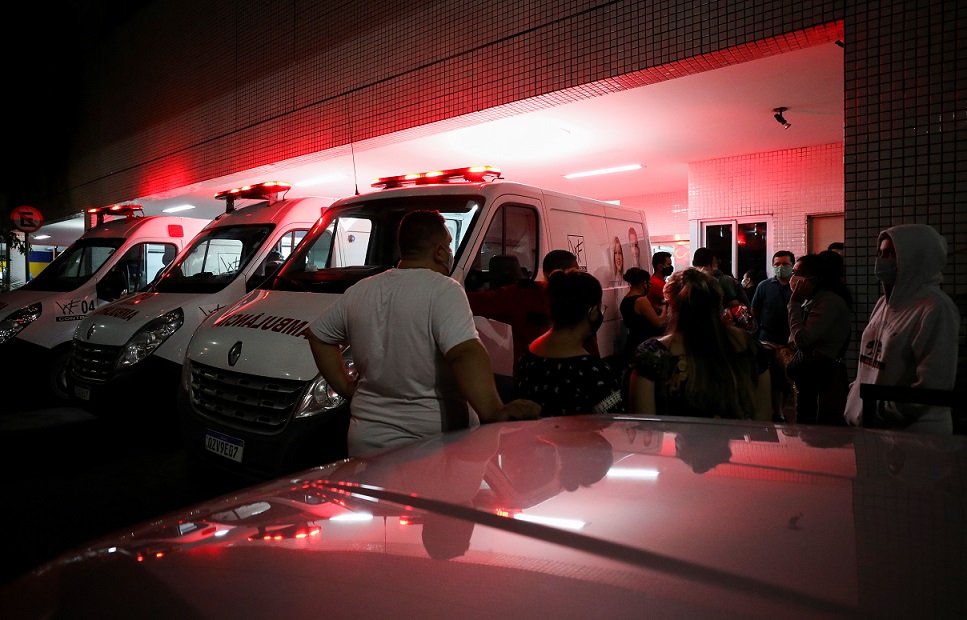 Hospitals in Brazil's northern state of Amazonas ran short of oxygen and made an urgent call for help from the US on Thursday, as Britain slapped a ban on new arrivals from Brazil over fears of a new home-grown coronavirus variant.

Researchers said the new variant could be contributing to the sharp rise in cases in Amazonas state, though they were conducting more studies to ascertain if it is more contagious than earlier versions of the coronavirus.

Amazonas, where nearly 6,000 people have died from Covid-19, is now suffering a devastating second wave that is pushing emergency services to breaking point.

Amazonas made a dramatic appeal to the US to send a military transport plane to Manaus with oxygen cylinders, congressman Marcelo Ramos told Reuters.

Health authorities said oxygen supplies had run out at some hospitals and intensive care wards were so full that scores of patients were being airlifted to other states.

Britain said it would ban travellers from Brazil, several other South American countries and Portugal, after Japan recently detected the new variant in four travellers from Amazonas. This variant features 12 mutations, including one also found in highly infectious variants recently discovered in Britain and SA that have begun circulating around the globe.

Researchers from the Oswaldo Cruz Amazônia Foundation said the new variant found in Japan likely appeared in northern Brazil between December and January.

Still, Jarbas Barbosa, assistant director of the Pan American Health Organisation, was not ready to pin the surge in infections in Amazonas on the new variant.

“It is happening also in many different cities and states, probably due to the holidays, the summer, with more travels and people going out, and the relaxation of social distancing measures,” Barbosa said.

Brazil's President Jair Bolsonaro has been lambasted for downplaying the severity of the world's second-deadliest Covid-19 outbreak, and pressure is mounting to begin vaccinations as a second wave of infections surpasses the first.

The head of the national mayors' association said the country aimed to begin nationwide Covid-19 vaccinations on January 20.

“If it's not on the 20th, for whatever logistical problem, it will be on Thursday 21,” Jonas Donizette said in a statement. “Inoculations will begin with eight million doses, distributed to five million Brazilians.”

The government is planning a January 19 ceremony to mark the start of inoculations, according to a source involved in the plan.

Two vaccines — one made by AstraZeneca Plc and another developed by China's Sinovac Biotech — will form the bedrock of the government's vaccination plan. Both have applied for emergency use in Brazil, with health regulator Anvisa expected to decide on Sunday whether to authorise them.

Anvisa said it had asked for missing information from Brazilian biomedical centres that are partnered with the vaccine developers, Fiocruz and Butantan. In the case of Butantan, Anvisa requested additional efficacy data from phase 3 trials of the Chinese vaccine done in Brazil.

Vaccination of the country's population will take 16 months at most, deputy health minister Elcio Franco said at a news conference on Wednesday.

The health ministry said the plane's departure from Recife in northeastern Brazil had been delayed until late on Friday.