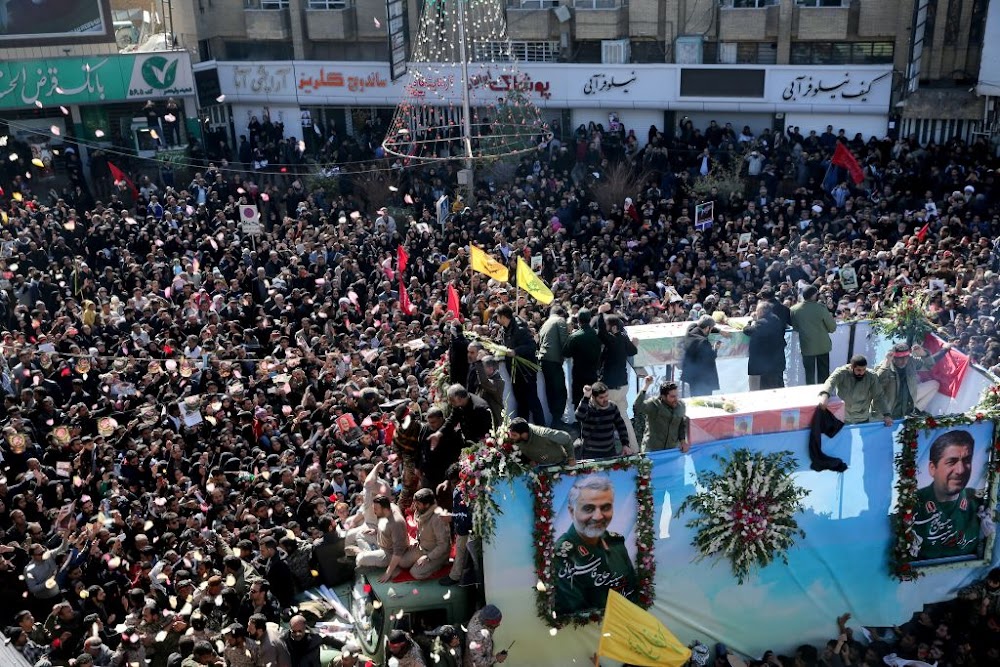 Dozens of people were killed in a stampede among huge crowds of mourners at the funeral ceremony for a slain military commander in the southeastern Iranian city of Kerman on Tuesday, state-affiliated media reported.

Tens of thousands of people had poured on to the streets of Kerman to pay tribute to General Qassem Soleimani, who was killed in a US drone strike in Iraq on Friday. Many chanted "Death to America".

The Young Journalists Club, which is affiliated to state television, said on its website that a stampede had broken out and 35 people were killed and 48 wounded. More details were not immediately available.

Soleiman’s body had been taken to Iraqi and other Iranian cities before arriving in his hometown Kerman for burial, prompting mass outpourings of grief nationwide as the coffin was carried through streets.

In other developments on Tuesday, a senior Iranian official said Tehran was considering 13 scenarios to avenge his killing.

In Washington, the US defence secretary denied reports the US military was preparing to withdraw from Iraq, where Tehran has vied with Washington for influence over nearly two decades of war and unrest.

Soleimani was responsible for building up Tehran’s network of proxy forces across the Middle East.

US and Iranian warnings of new strikes and retaliation have also stoked concerns about a broader Middle East conflict and led to calls in the US Congress for legislation to stop US President Donald Trump going to war with Iran.

“We will take revenge, a hard and definitive revenge,” the head of Iran’s Revolutionary Guards, General Hossein Salami, told mourners in Kerman.

Iran’s Supreme Leader Ayatollah Ali Khamenei and military commanders have said Iranian retaliation for the US action on Friday would match the scale of Soleimani’s killing but that it would be at a time and place of Tehran’s choosing.

Ali Shamkhani, secretary of the Supreme National Security Council, said 13 “revenge scenarios” were being considered, Fars news agency reported. Even the weakest option would prove “a historic nightmare for the Americans,” he said.

Iran, whose southern coast stretches along a Gulf oil shipping route that includes the narrow Stait of Hormuz, has allied forces across the Middle East through which it could act.

Representatives from those groups, including the Palestinian group Hamas and Lebanon’s Hezbollah movement, attended the funeral event in Tehran.

Despite its strident rhetoric, analysts say Iran will seek to avoid any conventional conflict with the United States but asymmetric strikes, such as sabotage or other more limited military actions, are more likely.

Trump has promised strikes on 52 Iranian targets, including cultural sites, if Iran retaliates, although US officials sought to downplay his reference to cultural targets.

USA: Russia is spreading disinformation about the coronavirus

UMI: Our Music Festival 'bigger than before'

Will Budget 2020 growth-boosting policies this time around Mr Mboweni?

Jantjies feels he still improve for the Blues clash