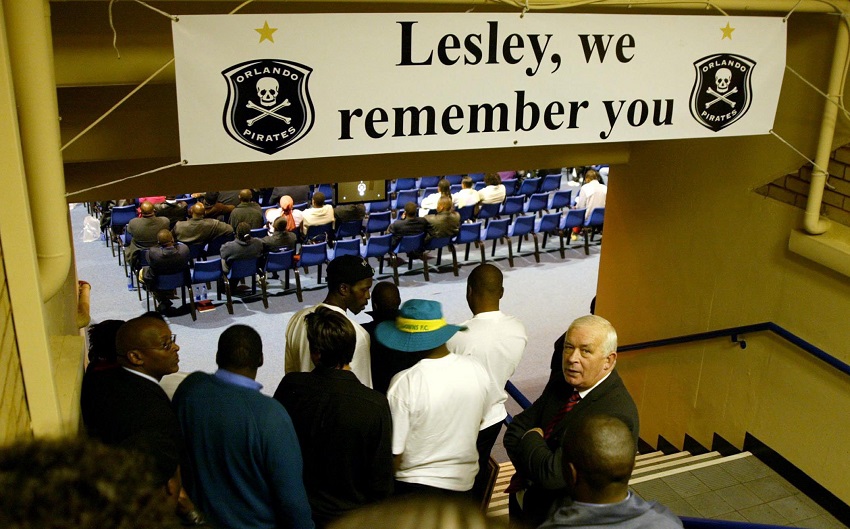 Since beloved young Orlando Pirates striker Lesley "Slow Poison" Manyathela died in a car crash on August 9 2003, there have been nine more deaths of prominent SA footballers on the roads in the following 17 years.

The 33-year-old Bafana Bafana right-back Anele Ngcongca - one of the country's most successful football exports - became the latest to die in a car accident in KwaZulu-Natal on Monday.

TimesLIVE has compiled this tragic roll call of 10 SA footballers who died in car accidents since 2000:

Emerging Pirates and Bafana star striker Manyathela died aged just 21, having had a big career path ahead of him after scoring 48 goals in 73 matches for the Buccaneers.

Manyathela had just returned from trials in Europe and scored for Pirates in their 2-1 defeat to Jomo Cosmos at Rand Stadium when he crashed on his way to his hometown Musina to spend time with his mother.

Having been the Premier Soccer League's (PSL) Golden Boot winner, helping steer Bucs to the 2002-03 title, he was on the verge of signing for Dynamo Kiev in Ukraine. The PSL's top scorer award was subsequently named after Manyathela.

Mamelodi Sundowns attacker Leremi died in an accident after losing control of his car in Brackensdowns, near Alberton. He was returning home from a Caf Confederation Cup game against Astres FC in Cameroon. The talented 22-year-old had already won a league title with Pirates in 2002-03, as a team-mate of Manyathela, and also had a big future ahead of him.

Free State Stars striker Henyekane, 31, was travelling from a party in QwaQwa with friends and a teammate in two separate cars. Henyekane's car smashed into a truck at high speed and burst into flames, killing the ex-Golden Arrows and Mamelodi Sundowns striker and the other four passengers - a man and three women - on impact. He had earned nine caps for Bafana Bafana.

A product of Ajax Cape Town's famed academy from the Eastern Cape, Lolo had been part of the Urban Warriors' famous combination that painfully lost out to Pirates for the title on the final day of the season for the 2010-11 PSL season under Foppe de Haan. Though he featured just seven times in that campaign, he had become a regular by the time of his death at 27 in a head-on collision in Khayelitsha.

Maritzburg United's promising 26-year-old midfield playmaker had established himself as a midfield star at the KwaZulu-Natal club when he and a woman died in a car accident in the early hours of a Sunday morning when their car veered off the road and into the Duzi River in Pietermaritzburg. Two other passengers survived. Cele had scored the opening goal the previous night in a 3-3 draw against Pirates at Harry Gwala Stadium.

Less than two years after the death of Cele, Maritzburg were left devastated again by the news that 20-year-old Dlamini had died in a car accident. The midfielder was travelling through Cato Ridge in KwaZulu-Natal when tragedy struck. The driver of the car, Royal Eagles midfielder Happy Mashau, escaped unscathed. Emerging starlet Dlamini had played just six times for United.

Polokwane City defender Tshehla, the older brother of Belgian-based Bafana star Percy Tau, died aged 26 in a car accident in Kwaggafontein, Mpumalanga, on his way to spend time with his family during his off weekend.

Free State Stars winger Jantjie was killed in a car accident in Bethlehem. The 30-year-old late bloomer - signed by Stars from First Division Mbombela United at the start of the 2016-17 season, and becoming an important fixture for the Free State team - was killed instantly when the vehicle he was driving reportedly collided with a truck.

Barely a week after their monumental triumph of shocking Kaizer Chiefs 1-0 in the Nedbank Cup final in Durban, First Division team TS Galaxy were in mourning after forward Mbamba died in an accident in the Duduza area of the East Rand.

Former Bafana and Sundowns defender Ngcongca, a Jupiler Pro League title winner with KRC Genk in Belgium in 2010-11, died in an accident on the N2 outside Mtunzini, north of Durban, on Monday. The female driver of the car sustained critical injuries and was hospitalised. Paramedics had responded to a single vehicle roll-over. Ngcongca, SA's right-back as hosts of the 2010 Fifa World Cup, was in KwaZulu-Natal to conclude a loan deal to AmaZulu.