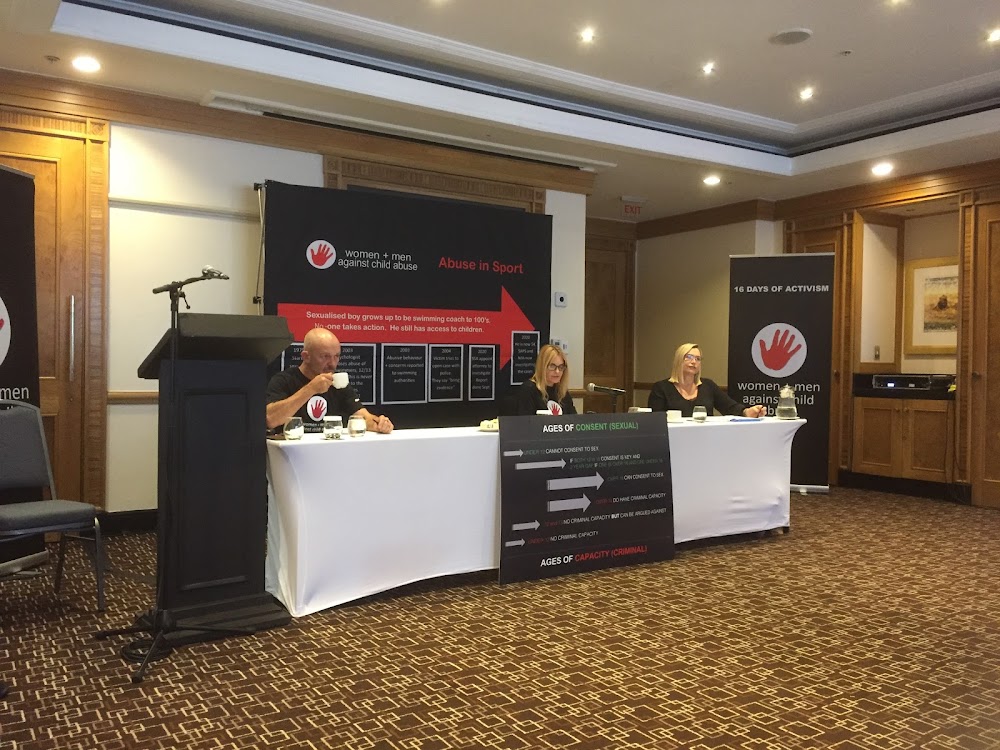 Debbie Wade‚ 51‚ faced the media for the first time on Tuesday and‚ after fighting back the tears for several seconds‚ she spoke about the sexual abuse she suffered more than 40 years ago and which has consumed her life since.

She spoke with anger at how she had been ignored for nearly 20 years‚ and she spoke with determination about how she would like to see her abuser‚ now a prominent swimming coach‚ kept away from young girls and even jailed.

“The only reason I’m emotional today is that at last somebody is listening and somebody is hearing me‚” she told the press conference in Johannesburg‚ organised by Women and Men against Child Abuse (WMACA).

Wade’s abuse started at a Durban swimming club in 1979‚ when she was 10‚ at the hands of her female coach’s 13-year-old son.

She knows of at least three other victims. Suzanne‚ in her training squad at the time and two years older than Wade‚ wants to remain anonymous. Wade and Suzanne have laid charges with the police.

The other two victims Wade learned about while undergoing psychotherapy in the early 2000s‚ two girls‚ one aged 12 and the other 13.

When Wade‚ suffering from post-natal depression‚ finally told her psychologist about Mr X‚ her therapist informed her that she was treating two young girls who had also been abused by him.

She read from a letter of confirmation written by her psychologist: “This serves to confirm that … Wade disclosed to me … that Mr X‚ the son of her coach‚ had repeatedly sexually abused her.

“She also stated that she was concerned that Mr X might still be abusing young swimmers. I disclosed to her there were two young girls I was treating who had allegedly been abused by Mr X.”

From that point on she decided to fight.

“This is not just about me … this is about the fact that I [had] to hear 24 years later [from 1979 to 2003] that this person continued to abuse other girls‚” said Wade‚ adding that the girls had not been believed by their parents.

In 2003 she went to the national championships at King’s Park pool and collared the then president of KwaZulu-Natal Aquatics and told him her story.

“[He replied] yes‚ it doesn’t really surprise him much because there had been various complaints about Mr X over the years‚ but actually there was no evidence. Did I have any evidence?

“I’m not sure what [he] wanted me to bring as evidence of rape after 24 hours. That was the end of the discussion. He never came back to me.”

Wade then wrote a letter to Mr X‚ which she sent registered mail‚ pleading with him “to stop fiddling with little girls”.

She said she got feedback via a third party that Mr X had dismissed her allegation‚ describing their relationship as “consensual”.

Then she went to the police in 2004‚ and again she was asked for evidence. They didn't help.

“Over the years I have not kept quiet. There are people in the swimming community who know my story and allegations‚ but nobody has ever taken me seriously. No‚ they rather believe Mr X.”

On July 18 she summoned the courage once again and raised the matter with Swimming SA president Alan Fritz. “It is a nightmare to relive this‚ it is an absolute nightmare not be heard and to be silenced.”

Fritz ordered an independent investigation‚ which resulted in a report.

Wade and WMACA‚ which played an instrumental role in the conviction of disgraced tennis legend Bob Hewitt‚ have been critical of how Fritz has handled the matter‚ but a federation insider said a disciplinary against Mr X had already been established.

After more than four decades‚ Wade finally dares to dream of justice.