SA couple trapped in epicentre of coronavirus outbreak in China

President Cyril Ramaphosa welcomes the Springboks to the Union Buildings 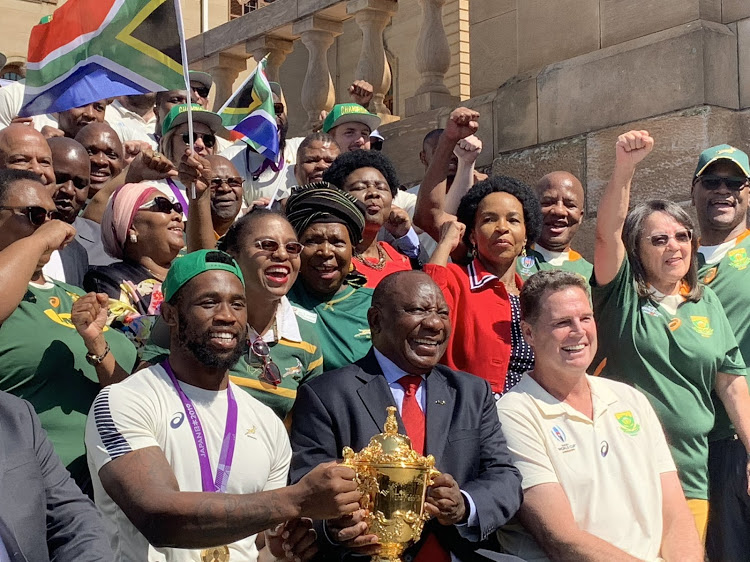 Fans were up early waiting for the coveted Webb Ellis Cup to arrive as the Boks began their Rugby World Cup trophy tour in Pretoria on November 7 2019. Captain Siya Kolisi expressed his gratitude to the nation for the support throughout the World Cup. President Cyril Ramaphosa also shared a few words, saying he knew all along that victory was coming.

President Cyril Ramaphosa and almost the entire cabinet received the Springboks to the Union Buildings in Pretoria on Thursday morning.

The recently-crowned Rugby World Cup Champions presented Ramaphosa with the Webb Ellis trophy they won after beating England in the final in Yokohama last weekend.

Captain Siya Kolisi‚ coach Rassie Erasmus and the rest of the Boks players arrived at the Union Buildings around 8.30am on Thursday to present the trophy to Ramaphosa.

They were met with loud cheers from the crowd that braved the early morning hot weather in the nation's capital.

Ramaphosa‚ who was with the team in Tokyo for the final‚ thanked the Boks for their gallant effort after winning a third World Cup title.

#President #CyrilRamaphosa after he received the #Springboks at the #UnionBuildings. pic.twitter.com/357RWEFBmq

"These are our warriors who went out to war and brought back the trophy‚" he said.

"We sent them out to represent the country and they did so with excellence.

"The country thanks you and we are very proud of you."

Kolisi once again thanked South Africans for their support during the Japan-held event.

Some government officials already here at the #UnionBuildings to welcome the #Springboks. pic.twitter.com/ippeQMh3u6

"We are proud to be here to present the trophy to you Mr President and we thank you for the support‚ and the Minister of Sport Nathi Mthethwa‚" Kolisi said.

"We are also happy to present the trophy to our loyal fans who backed us all the way during the tournament.

Government officials at the #UnionBuildings to receive the #Springboks. pic.twitter.com/yQ0Cbox4gD

After Union Buildings‚ the Boks will visit Loftus.

Their Pretoria leg of the trophy tour will end at Tshwane House before they depart for Johannesburg.

SA dismissed for 183 at lunch on third day, England opt against enforcing follow

Iyer fireworks give India win in T20 opener in NZ

Government must ensure SAA and Eskom are not privatised: Sihle Zikalala

Schools carry a duty of care to pupils at all times

Mmusi Maimane and DA's Ghaleb Cachalia in war of words