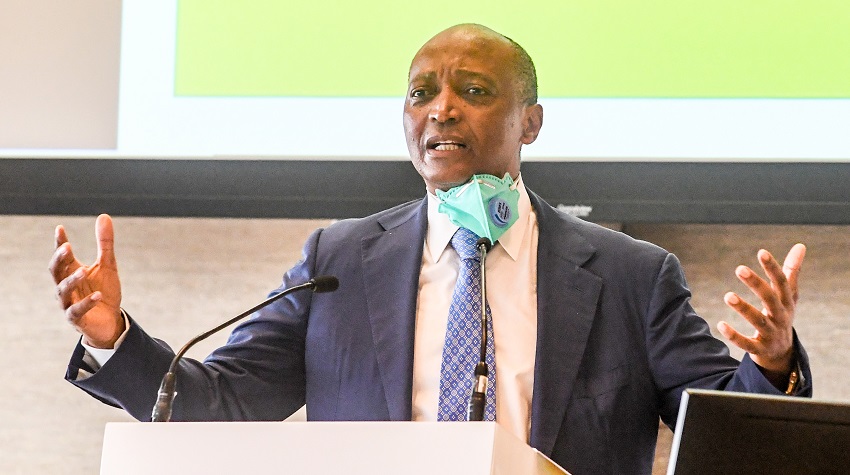 Patrice Motsepe and his Confederation of African Football (Caf) presidential bid campaign moved to quash “misinformation‚ misconceptions and misrepresentations” on his candidacy as he presented his plan to restore the long-ailing continental ruling body.

Presenting his 10-point action plan 15 days before the elective congress in Rabat‚ Morocco, at the Sandton Convention Centre on Thursday‚ Motsepe was at pains to play down the political rivalry between SA and Morocco that has spilt over into the football arena.

Motsepe and the SA Football Association distanced themselves from speculation that his bid was in part aimed at ending Morocco’s perceived puppet master role in Caf‚ a concept that was also disputed.

Motsepe was presented as a unifier and the business mogul who could restore best governance to Caf. Perceptions that have circulated of Motsepe as the preferred candidate of Fifa and its president Gianni Infantino‚ and speculation that the Sundowns president has made assurances to the global body that Samoura Fatma will be brought back to Caf as secretary-general‚ were also denied.

“Let me start by correcting a matter of misinterpretation and maybe misinformation‚ and maybe more than that‚” Motsepe said.

“[Sports] minister Nathi Mthethwa [previously] announced very clearly that if the presidency of Caf is won by a South African ... we will not move the headquarters of Caf from Cairo to South Africa.

“Two days after the minister’s announcement I arrived in Cairo‚ and prominent leaders came to me and said‚ ‘But how can your minister say if you win we are going to move the Caf headquarters from Cairo to South Africa’. So just for the record‚ there is no intention. ... I want to correct that.

“The second [misinformation] one is that if I am elected‚ we are going to use my position as president to undermine‚ disadvantage and embarrass Morocco. Totally incorrect. False.”

SA and Morocco have clashed politically over SA’s recognition of the Sahrawi Arab Democratic Republic in the disputed territory of Western Sahara‚ which was annexed by Morocco in 1975. Safa‚ at the instruction of the government‚ voted for US‚ Canada and Mexico over Morocco as hosts of the 2026 Fifa World Cup.

Safa president Danny Jordaan responded to a question about Morocco being perceived as having “hijacked” control of Caf under former president Ahmad Ahmad‚ who was banned from football for five years by Fifa for ethics transgressions in November.

“I just want to deal with this concept that one country among 54 member nations can hijack an organisation. There is no such concept‚” Safa’s president said.

Samoura‚ FIFA’s secretary-general‚ served as general delegate of Caf when Fifa took control of the organisation after Ahmad’ suspension. Speculation has been that Motsepe has assured Infantino that Samoura will be brought back to Caf as secretary-general‚ and also that the Sundowns boss is Fifa’s preferred candidate.

“There are no agreements or any contracts that have been signed with anybody‚” Motsepe said. “You only start thinking about specific candidates if we are honoured to be elected as president.

“I must say that I know in business there is a lot of misinformation‚ but I am learning that maybe football takes the cup when it comes to misinformation.”