Mosimane on Al Ahly: 'If you think I had pressure at Sundowns‚ no my friend‚ I have pressure here' 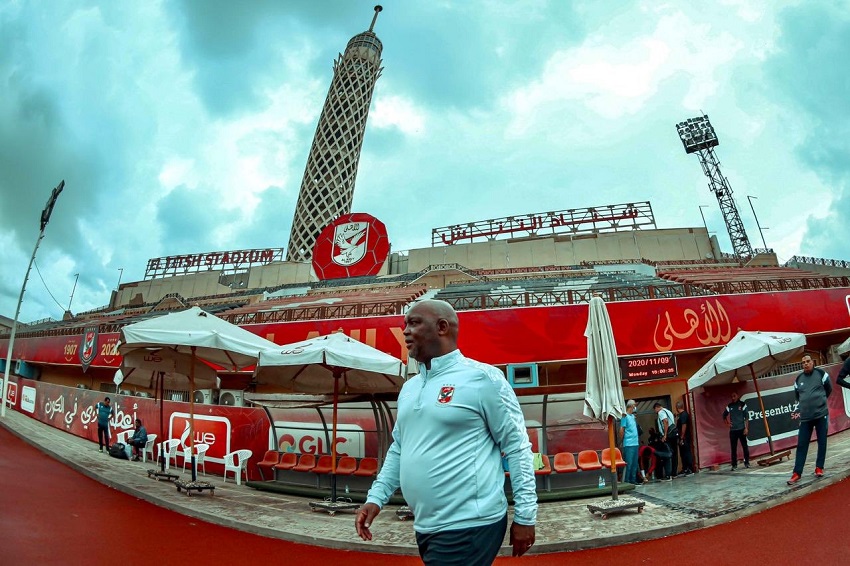 Al Ahly coach Pitso Mosimane has said he would not have taken the job had he not expected criticism and pressure‚ in response to some former players’ murmurs of discontent at his job so far.

It says something of the level of expectations at Ahly that‚ as Mosimane remains unbeaten from 19 games in all competitions‚ winning 16 and drawing three‚ that two draws in the league this season have met with criticism from ex-players.

This despite the coach also having wrapped up a treble at the Red Devils‚ including the 2019-20 Caf Champions League from the semifinals‚ arriving for the last few months of last campaign from October.

After the latest draw‚ 0-0 away to National Bank of Egypt on Sunday‚ two ex-goalkeepers of the club‚ Ahmed Fawzi and Ahmed Shobier‚ voiced their displeasure at the coach’s team selections.

The ex-Mamelodi Sundowns coach shrugged off such critiques‚ saying many ex-players have also praised him.

“You can’t focus on that‚” Mosimane said to an online press conference of the SA Football Journalists’ Association.

“If you want to coach Al Ahly‚ and want to coach Sundowns‚ do you worry about the former player who’s been asked‚ ‘Do you think the guy is doing well‚ will they make it‚ do you think he’s selecting the right squad?’.

“Former players have got what they have to say and we always have to respect their contributions in football.

“Some speak well. I mean [ex-Zamalek and Tottenham star] Mido came out‚ he spoke so well. Wael Gomaa came from Qatar – he came to me‚ oh unbelievable.

“ … That pressure is always there. You must thrive under criticism.”

Mosimane did let on that sometimes the pressure at Ahly is more than he’s previously experienced.

Speaking on a different subject‚ Sundowns president Patrice Motsepe’s bid for the Confederation of African Football presidency‚ Mosimane said: “This will also open other things. And we will know now what football is in North Africa.

“If you think I had pressure at Sundowns‚ no my friend‚ I have pressure here. Now this is real stuff.

Mosimane is the first black sub-Saharan African to coach Ahly in their 113-year history. There certainly seems an element of sour grapes‚ or envy‚ to some of the criticisms in a country used to seeing Egyptians‚ North Africans or Europeans appointed at its football clubs.

Hassan‚ assistant-coach to twin brother and legendary Egypt striker Hossam at Ittihad‚ was responding to a 4-0 thrashing by his team by Mosimane’s Ahly.

“If Hareth [Ahly’s kit man] took charge of Al Ahly‚ he will win trophies‚” Hassan said after the game.

“If we [Hossam and Ibrahim Hassan] took charge of Al Ahly we will win trophies. If Pitso coached any other team in the league‚ he will get sacked after two games.”

Hossam Hassan had previously contradicted his brother’s view‚ calling Mosimane‚ “A coach of a high level”‚ “diligent” and “hard-working”.

Mido‚ after Ahly recovered from a poor first half to a 4-1 victory over Entag El-Harby‚ compared the Devils in the second half to Jurgen Klopp’s Liverpool.

“In the first-half Al Ahly were poor‚” Mido said.

“However‚ Al Ahly under the leadership of Pitso Mosimane are distinguished by some specific details and the South African’s touch can be seen.

“Mosimane’s Al Ahly play from the back and are very quick in applying the pressure. They became like Liverpool.

“ … Al Ahly applied high pressure and managed to intercept the ball. This is Mosimane’s touch that we didn’t see with former head coach René Weiler.”

Al-Merreikh coach Didier Gomes has been another to heap praise on Mosimane‚ whose first full season at the biggest club in Africa was always going to be tougher than his honeymoon arrival at the end of 2019-20.