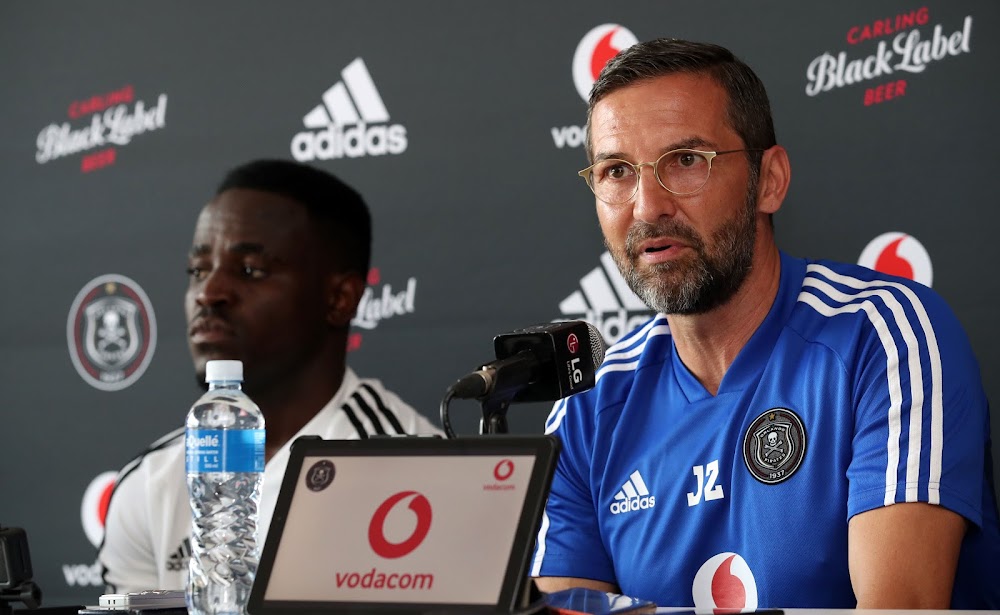 Orlando Pirates are showing a thirst for input in their training sessions‚ new coach Josef Zinnbauer has said‚ explaining how the Buccaneers have looked revitalised in his first four matches.

Pirates meet Highlands Park at Orlando Stadium on Saturday (kickoff 6pm) with Zinnbauer’s start of three wins and a draw from increasingly having the appearance of being produced by method than beginner’s luck‚ or just the normal lift that the arrival of a coach can result in.

Zinnbauer said the feeling from getting a first big win under the belt‚ 1-0 in the Absa Premiership against Mamelodi Sundowns at Orlando Stadium on Wednesday night‚ was: “Great.”

He continued: “The feeling is good. It was my first time that we had a big game. And for me it was important that my team produced good work.

“They did well with the ball and against the ball. This is important against Sundowns.

“Compliments to my team – we worked very well without the ball.”

Working without the ball was the area Zinnbauer identified immediately after his team’s first win‚ 3-1 against Black Leopards at Orlando before the Christmas break. They returned with a 1-1 draw away against Bloemfontein Celtic‚ where spurning a lead emphasised that Bucs’ game management remained in need of work.

A 4-1 away thrashing of Polokwane City and Wednesday night’s win against Sundowns have followed‚ where increasingly Pirates’ use of the ball in possession has improved. Zinnbauer is more pleased with the positioning and management of Bucs’ play without the ball.

“I think the team has improved in the training session. They want new inputs‚” he said.

“And we have a player‚ Luvuyo Memela‚ who produced a great game [against Sundowns].

“They found a solution now for great passes between the lines. And that’s not so easy. And they worked well against the ball.

“And yeah‚ Gabadinho Mhango now [with seven goals in Zinnbauer’s four games] – I don’t know what he drinks the whole week‚ or what he does the whole week [to produce such energy]. But he works hard against the ball.

“The whole team works well against the ball and that’s our success at the moment.

“But it’s only four games. It’s not a lot. We have work to do‚ and I think the team are ready for that. They want the input.

“But we also saw bad things in the game. I‚ in my philosophy‚ saw things.

“But what the team are doing at the moment is great.”

Pirates remain in fifth place in the PSL.

SuperSport coach Tembo in hunt for Furman's replacement and a striker

Rev up your sports car for #footdownfriday