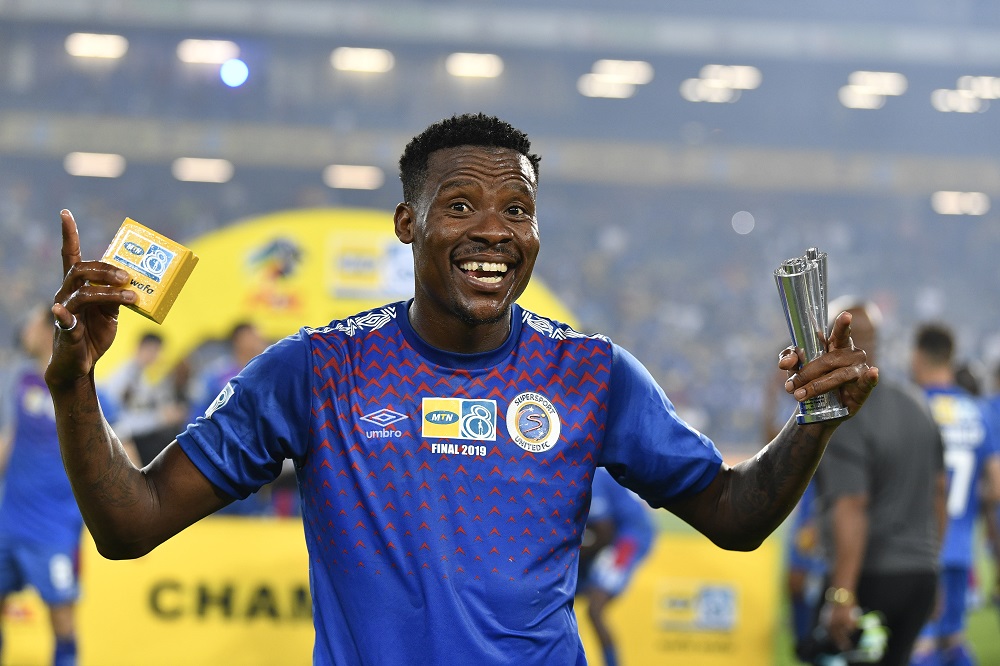 Thamsanqa Gabuza helped SuperSport United to win the MTN8 cup by beating Highlands Park 1-0 at Orlando Stadium on Saturdays a few days after the burial of his son who passed away earlier in the week.

Gabuza‚ who was named the man-of the-match and finished as the tournament’s top scorer‚ kept the news from his team-mates and did not attend the burial on Thursday as he did not want to upset the camp ahead of such a crucial match.

SuperSport coach Kaitano Tembo said after their triumph that the gangling former Orlando Pirates and Golden Arrows striker didn’t inform the team nor attend to his son’s funeral on Thursday in fear of shifting the focus of his team ahead of the final.

“I think I’m a little bit emotional but not because of the game‚” a sombre looking Tembo uttered these words after he was asked for his reaction after winning his first trophy in only his second season as head coach of SuperSport.

“It’s because of the sad news I heard just after the game just now concerning Gabuza. It’s something that he did and I was not even expecting him to do that.

“I won’t even encourage him to do that. I think he did what he did for the badge. This is what happened‚ he lost his son on Monday and he never told anyone. The funeral was on Thursday and he never attended because he only told us in the dressing room now‚” continued Tembo to the shell shocked journalists in his official post match conference.

“This is what happened‚ he didn’t want to upset the camp because we were facing a very crucial game. For me it (getting the news) just killed everything because I see someone (Gabuza) who’s really committed‚ someone who a lot of players can learn from.

“He’s got to go through that and still play the way he played. Play a man-of-the-match performance like that in the back of what happened. I think for me I dedicate this win and this cup to him because I think from day one he really deserves.

“I think that’s the only sad part for me and it’s already hitting that someone can do that‚ probably doing it for the team and doing it for me. I appreciate that but at the very same time I’m also hurting.”

Gabuza‚ who refused to talk to the media about neither his son nor the game after the match‚ trying to hide his sadness in the team’s changing after match and was seen in videos celebrating with his team with his R25 000 man-of-the-match cheque not leaving his hands.

Gabuza joined SuperSport at the beginning of this season following six seasons that didn’t end well at Pirates as he struggled to score goals or winning any silverware in his last four years.

He scored a paltry 11 goals in 95 matches but seemed to have found his real home at SuperSport where he has scored four goals in 11 in all competitions.

Gabuza’s striking partner Bradley Grobler scored the winning goal as SuperSport beat Highlands Park 1-0 in Soweto to capture their third top eight trophy and a second in three seasons after playing in the last three of the competition’s cup finals.