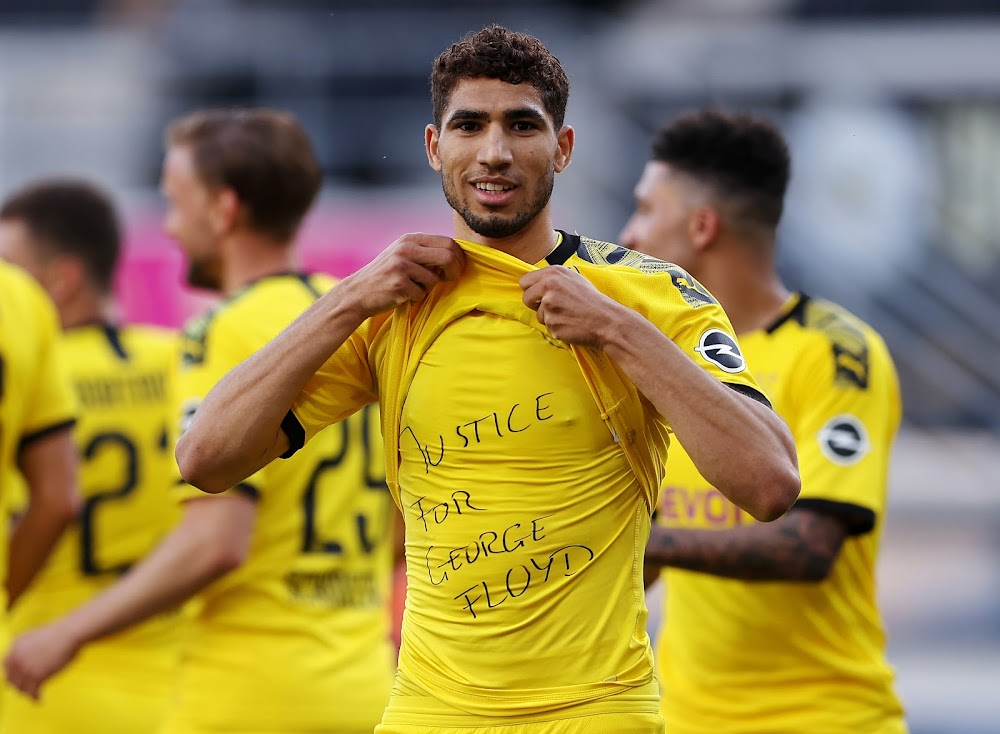 Fifa president Gianni Infantino has said that footballers in Germany calling for justice for George Floyd during matches deserve applause rather than sanctions.

An unarmed Floyd, a black American, died last week after a white policeman in Minneapolis kneeled on the handcuffed man's neck for several minutes.

The incident has sparked days of violent protests across the United States.

"For the avoidance of doubt, in a Fifa competition the recent demonstrations of players in Bundesliga matches would deserve an applause and not a punishment," Infantino said in a Fifa statement.

Earlier Fifa called on football leagues to use "common sense" when deciding whether to discipline footballers for displaying political messages.

"Fifa fully understands the depth of sentiment and concerns expressed by many footballers in light of the tragic circumstances of the George Floyd case," world football's governing body said in a statement.

After scoring in Dortmund's win at Paderborn on Sunday England winger Sancho lifted his shirt to reveal the message "Justice for George Floyd".

His team-mate Hakimi and McKennie expressed similar calls for justice, while Frenchman Thuram, the son of World Cup winner Lilian Thuram, took a knee after scoring for Gladbach in memory of Floyd.

The International Football Association Board (IFAB), the sport's lawmakers, bans players from showing "any political, religious or personal slogans, statements or images".

However, pointing to its own anti-racism campaigns, Fifa intimated that no action should necessarily be taken against Sancho, Hakimi or McKennie.

"The application of the laws of the game approved by the IFAB is left for the competitions organisers which should use common sense and have in consideration the context surrounding the events," Fifa said.

The DFB is investigating the players in line with IFAB's laws, although president Fritz Keller said he understood their actions.

"If people are discriminated against because of the colour of their skin, it is unbearable," said Keller.

"If they die as a result of the colour of their skin, then I am deeply disturbed. The victims of racism need all of our solidarity."

Sancho was booked after revealing the message to mark scoring against Paderborn, although the DFB has said the yellow card was actually because he lifted his shirt over his head.

"This is defined under rule number 12 as behaviour that is clearly against the rules and should be seen as independent of any political message," said Lutz Michael Froehlich, head of the elite referees unit of the DFB.

"For referees it is not possible to make a judgement during a match about political, religious or personal slogans, messages or pictures," Froehlich added.