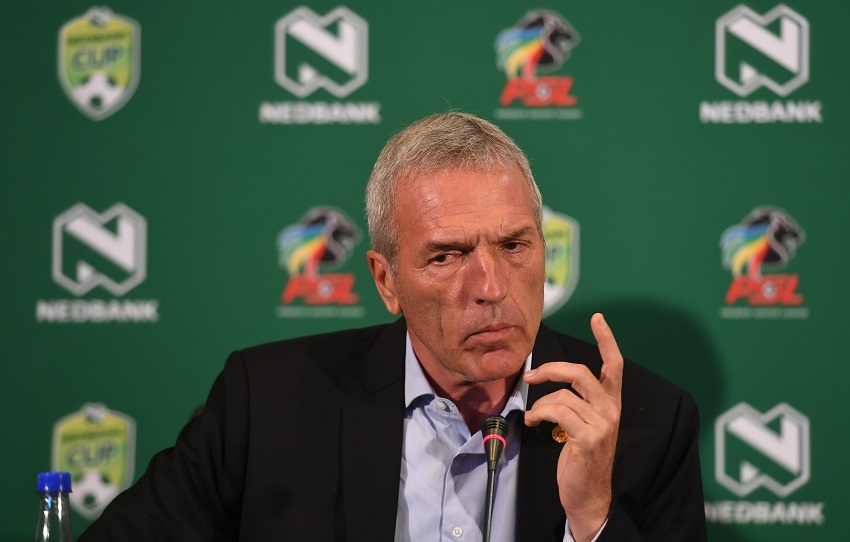 Ernst Middendorp appears to have won the race to become the new Maritzburg United coach and is set for his fourth stint at the club.

The German resigned from his job as head coach of Ethiopian giants Saint George SC this week and he is believed to be on his way back to SA.

Attempts to get comment from Middendorp were not successful but Maritzburg chairman Farouk Kadodia said reports linking the German mentor to the club are mere rumours.

“Those reports linking Middendorp with us are just rumours,” said Kadodia, who said that he is looking to appoint a new coach by the weekend.

“We are looking to appoint the new coach by the weekend but I can’t comment further on this matter because I don’t want to conduct [job] interviews in the media.

“I am currently interviewing people who are interested in the job, you just have to wait for the announcement whenever it is going to be made.”

The Team of Choice have been without a coach for the past few days since Eric Tinkler was fired earlier in the week. Former Bafana Bafana attacking midfielder Delron Buckley was installed in a caretaker capacity on the same day.

Buckley will be on the bench when Maritzburg face SuperSport United in a DStv Premiership clash at the Harry Gwala Stadium on Friday in a game they will be desperate to get something out of after failing to win a single point since the start of the season.

The People’s Team are languishing at the bottom of the log after four successive losses.

Middendorp was fired by Chiefs in September after the long-time leaders were pipped to the finish line on the final day of the season by Mamelodi Sundowns.

Four-time league title-winning coach Igesund is the other name that is on Kadodia's radar and he told TimesLIVE that he is ready to return to management after more than a year in the wilderness. Owen Da Gama is also in the market but is an outsider for the job.

“I miss coaching very much. I took a break for about 18 months to set up my academy and now I want to get back out there,” said Igesund, who has won the league title with Manning Rangers, Orlando Pirates, Santos and Mamelodi Sundowns.

“You miss all that when you are not involved at the highest level. You miss being out there on the training field every day and shouting instructions and preparing for matches, but it is going to happen.

“I am going to be back very soon. There were a couple of teams who talked to me but they weren’t quite right for me.

“As soon as I get the right team, I will definitely be coming back. I am sure that I will be back coaching in the PSL very soon now that my academy is going.”