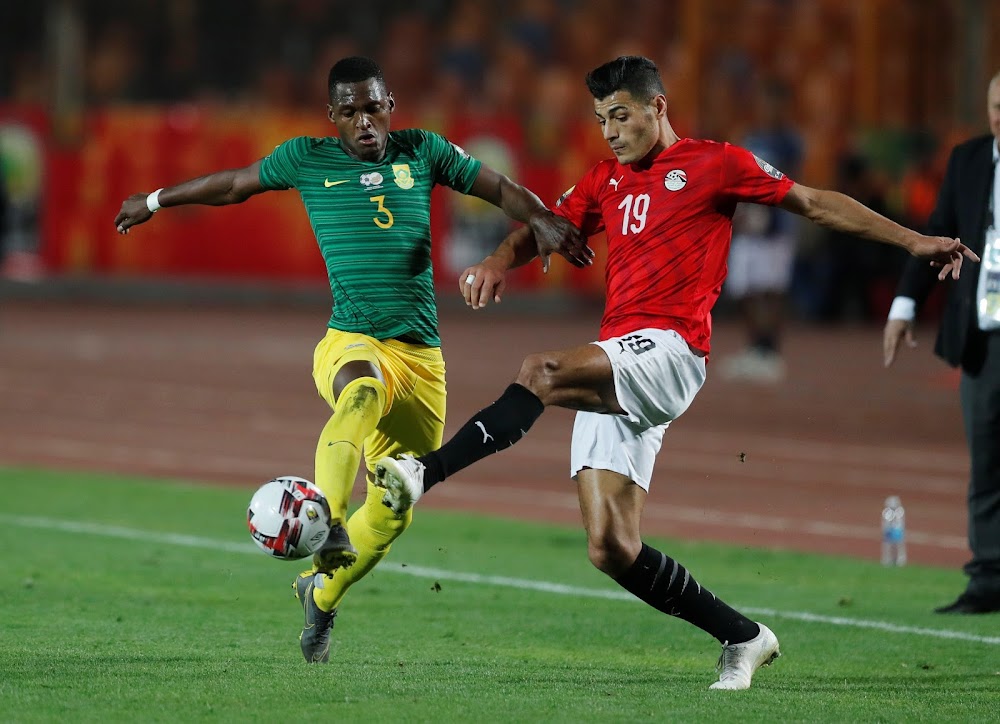 A controversial penalty from Ramadan Sobhi set Egypt on the way to a 3-0 win over South Africa in their 2019 Africa Under-23 Cup of Nations semifinal at the Cairo International Stadium on Tuesday.

South Africa must now face Ghana in Friday’s third-place play-off, where victory will see them qualify for the 2020 Tokyo Olympic Games, but they will be thinking of what might have been.

Egypt where awarded a penalty for a handball that was clearly outside the box, and South Africa later denied one in similar circumstances, as the home side gifted a scarcely deserved victory.

They will meet the Ivory Coast in Friday’s final, with both teams having already sealed their place at the Olympic.

South Africa coach David Notoane made two changes from the side that secured a point against Nigeria in their final pool match on Friday.

Out went striker Lyle Foster and defender James Monyane, to be replaced by Sipho Mbule and Kobamelo Kodisang. Foster had been substituted against the Nigerians with a knee problem.

Teboho Mokoena flashed a free-kick from 30-yards just wide of goal in the opening few minutes as South Africa made the brighter start.

But it would take until almost the half-hour mark for them to have a first real sight of goal and they should have grabbed the lead.

Luther Singh found some space on the left-hand side of the box and his low, driven cross just eluded Kodisang at the back post with the net gaping.

It was as close as either side came in the first half, with South Africa’s strong defensive discipline meaning there was little for goalkeeper Darren Johnson to do in the visitors’ goal.

Johnson had to make a smart save from a free-kick early in the second period, before the game’s big moment of controversy.

An attempted cross struck the arm of Thendo Mukumela, but the South African defender was clearly outside the box. Referee Daouda Gueye from Senegal had no hesitation in pointing to the spot though and Sobhi converted.

Predictably, it was then that the play-acting and time-wasting started from the home side, who tried everything to break South Africa’s rhythm.

Kamohelo Mahlatsi was fouled on what looked like the very edge of the Egypt penalty-box with 10 minutes remaining, the force of the impact pushing him outside of the box.

While referee Gueye adjudged it a foul, he ruled that the contact had been outside the box. He was wrong for the second time on the night.

Singh struck the crossbar with the resultant free-kick to rub salt in the South African wounds.

Egypt went up the other end of the pitch and sealed the win, some ponderous South African defending at the back allowing Abdel Rahman Magdi to net a second.

A howler from goalkeeper Johnson gifted Magdi a third as he let the Egyptian’s speculative shot squirm away from him.

There is still much to play for in Friday’s bronze-medal match and Notoane will feel his side have the beating of Ghana, but the manner of this defeat will be a bitter pill to swallow.

Branden Grace tests positive for Covid-19 at Barracuda, ruled out of next week's PGA Championship