Desert showdown: meet the top SA runners competing in the Battle of the Sports 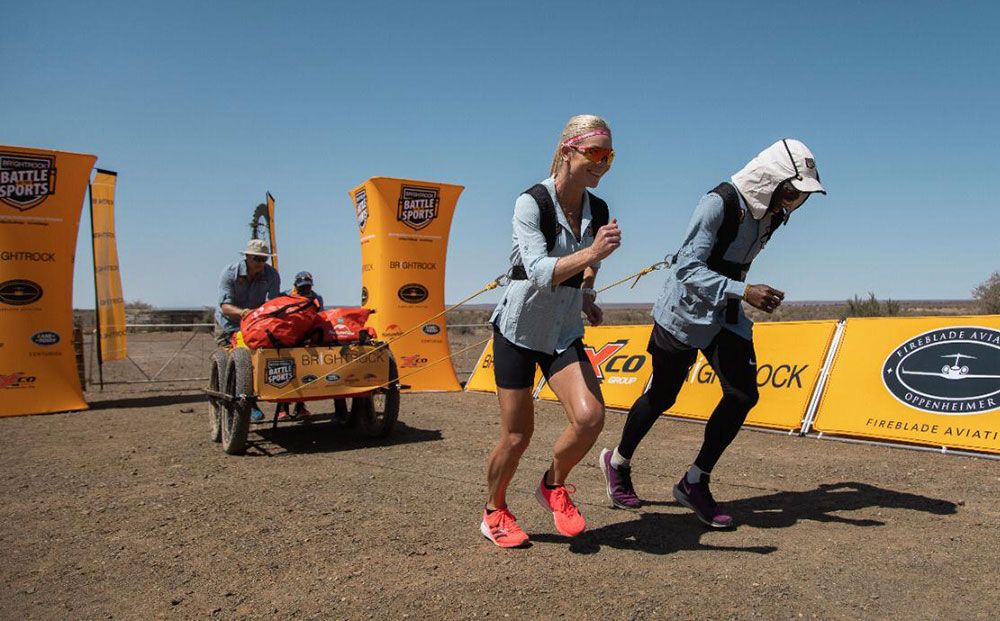 A team of some of SA's top runners is competing in the BrightRock Battle of the Sports, the 200km fundraising endurance race against time at the Verneukpan, the dry salt pan in the Northern Cape.

Bongmusa Mthembu, David Gatebe and Jenna Challenor (who is also the only woman taking part in the event) are the second team to compete. Team Rugby returned last Friday.

The runners set off on Thursday to prove which sport produces the toughest athletes and to raise funds for Covid-19 care in SA's vulnerable communities.

These ultra-marathon runners share a common passion — their love of running.

Free State-born Gatebe is the father of two boys. This former petrol attendant, who now works as a sport officer in the Rustenburg mining industry, made history when he broke the down-run record at the 2016 Comrades Marathon. He only took up road running when he was 24, and eight years later won the 2013 Two Oceans Marathon. His advice to every aspiring runner: “Train every day, eat every day and learn every day, and success will come.”

The story of Mthembu, three-times Comrades winner and part of an elite group of only 10 runners to win that marathon three times or more, is also remarkable. He won the Comrades Marathon in 2014, 2017 and 2018 — the second South African to win it twice in a row, after Bruce Fordyce.

Born in Bulwer, KwaZulu-Natal, Mthembu started running at school. After matriculating, he worked as a casual bricklayer and kept on training “just to keep his body healthy”.

In 2004, he started to enter races and, a year later, won the Maritzburg City Marathon “without any good training”. That is where he met his manager who improved his training programme, and the rest is history.

When ultra-marathon running star and mom of three Challenor dived head first into professional running, she placed second in her debut Two Oceans Marathon in 2017 — the first SA woman to do so — and last year ran the fourth-quickest marathon time yet for an SA woman.

She replaced Nick Bester in the team, and said it was an honour to step into his shoes, adding: “It is great to be part of a team and also have an opportunity to do something positive during the pandemic. It has been a really hard couple of months for most people, particularly not being able to train, and I have been looking for something I can do which can add a bit of positivity.”

The running team is being managed by nine-times Comrades winner Bruce Fordyce, supported by Bester, who was injured last month in an attack while he was training.

Erik Vermeulen is once again leading the team through Verneukpan. Nursing a slight Achilles tendon injury from last week's 200km trek with Team Rugby, he was both excited and nervous about the second challenge.

“My challenge with the rugby team was to keep them moving and positive,” he said. “With the runners, I need to slow them down a bit. I can see the energy and they are planning to average about 7km per hour.

“In these conditions, that is too fast. They are used to seven- to eight-hour events; this is more like 15 to 20 and means running in the dark. We need to be averaging 5.5km to 6km rather. I know they are going to push me hard as well and that is what I love — challenging myself and breaking new records.”

How do you get involved?

Support your team in the 200km challenge by donating to this worthy cause, or decide what event you want to do — alone or in a team — andvisit the Battle of the Sports websiteto enter and pay for your team.

Film your event — you can also do more than one — and upload the footage onto the challenge'sFacebookorTwitterpage, or viaInstagram. Use the hashtags#200kmchallenge #lovechangewhen posting.

Then challenge as many of your friends as possible, or any schools, clubs and companies, to do the challenge by tagging them in your social media posts.

The four teams competing in the event:

Haroon Lorgat back at Cricket SA

Ethiopia proposes holding postponed vote in May or June 2021 - FANA