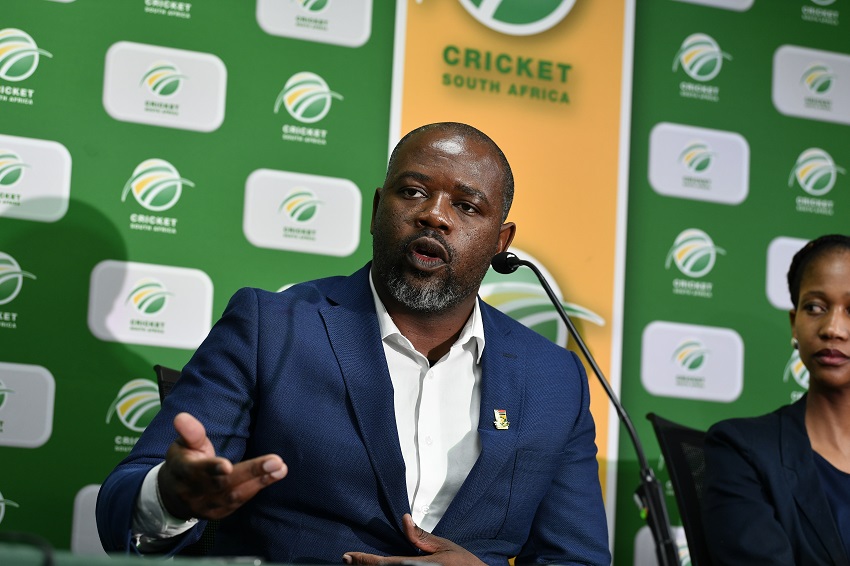 Cricket South Africa’s embattled chief executive officer Thabang Moroe has been suspended‚ partially bringing relief to an organisation that has been bleeding profusely because of repeated and wholesale administrative lapses.

Moroe‚ who was CSA’s vice-president before replacing Haroon Lorgat in 2018‚ has been put on leave with full pay.

In a statement‚ CSA said Moroe was suspended following reports received by the Social and Ethics Committee and the Audit and Risk Committee of the Board related to possible failure of controls in the organisation.

CSA president Chris Nenzani‚ the chairman of the board‚ has been tasked by the board to look at options to act in the position while also needing to hold discussions with former International Cricket Council (ICC) CEO Dave Richardson‚ a former South African international.

“A forensic audit of critical aspects of the business and the conduct of management related to such aspects shall be conducted by an independent forensic team‚” CSA’s statement read.

“In the interim‚ the Board of Directors has mandated the Chairman [Nenzani] to look at various options including holding discussions with Mr. Dave Richardson‚ the former Chief Executive Officer of the International Cricket Council (ICC)‚ regarding the appointment of an Acting Chief Executive Officer for the duration of Mr. Thabang Moroe’s precautionary suspension.”

Moroe’s suspension partially closes a chapter of a chaotic week for CSA‚ which started with the revoking of the accreditations of five journalists over the weekend.

Moroe’s troubles escalated on Monday after explaining the reasons behind the revoking of the accreditations on various radio platforms.

He butted heads with them on several occasions in regards with the signing of the Memorandum of Understanding‚ the restructuring of the domestic game‚ the non-payment of Mzansi Super League commercial fees and the MSL’s image rights.

There also was the stalling in terms of the appointment of the director of cricket‚ a critical position in light of the men’s national team’s struggles on the Test and ODI front.

Financial services giant Standard Bank‚ who have recently dumped CSA as a sponsor when the current agreement ends in April next year‚ summoned the association to a meeting on Monday to explain the mess the organisation found itself in.

In a statement released on Friday‚ Standard Bank’s group chief marketing and communications officer Thulani Sibeko said the decision to not renew the sponsorship was not taken lightly‚ but the bank’s integrity had to be protected.

“Standard Bank is committed to upholding the highest levels of leadership‚ integrity and governance. In light of recent developments at CSA‚ which are a culmination of long-standing problems which have damaged Standard Bank’s reputation‚ it has decided not to renew its partnership with CSA‚” Sibeko said.

Standard Bank’s exit was one of many blows CSA took on Friday after Dawn Mokhobo’s resignation as an independent board member.

Mokhobo had served on the board for seven years and her exit followed on the resignations of Professor Shirley Zinn and Iqbal Khan earlier this week.

Saca were appealing for Moroe’s resignation and that of CSA’s entire board but Saca’s outgoing CEO Tony Irish said industrial action won’t be undertaken for the forthcoming England series later this month.

“Saca reiterates however that industrial action by the players should be viewed only as a very last resort. We also wish to reassure cricket fans‚ and other cricket stakeholders‚ that Saca will not embark on industrial action with the players during the upcoming England series‚” Irish said.

“We are very aware of the importance of this series to the Proteas and to England‚ to the many fans from both countries and to the media and commercial partners.

Branden Grace tests positive for Covid-19 at Barracuda, ruled out of next week's PGA Championship

Luc Eymael might never work in SA again: Safa to report the Belgian coach to Fifa‚ Caf and minister Mthethwa

New-vehicle sales flatten out in July

Tipping the scales: what it takes to babysit the most trafficked animal