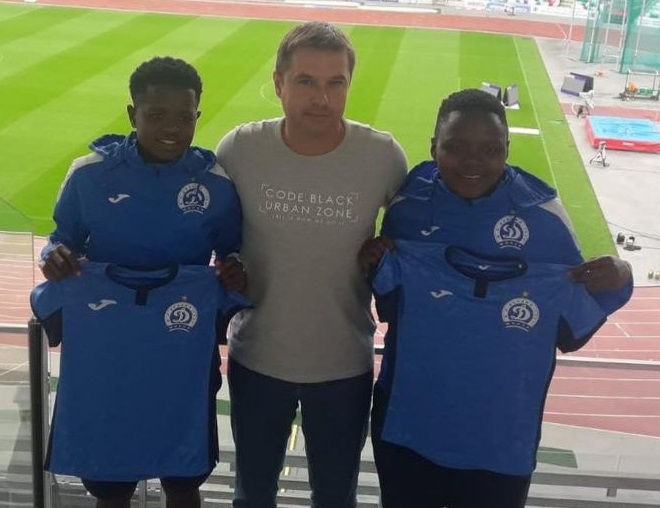 Mulaudzi and Ramalepe’s transfer was put on hold in March and they have arrived in the midst of the PWL season having been unable to travel for the start of the campaign due to the lockdown in South Africa in response to Covid-19.

Belarus has not gone into lockdown. Sandwiched between Poland and Russia‚ football in the country runs from March to December to avoid the cold.

The South African duo have started brightly already as Ramalepe‚ starting‚ and Mulaudzi‚ off the bench‚ made their debuts in a 7-2 second leg Women’s Cup semifinal win that sealed a 12-3 aggregate victory over Bobruichanka on Wednesday for a place in the final.

Dinamo lead the PWL‚ the winners of which reach the Champions League‚ which 30-year-old veteran forward Mulaudzi‚ who has played in Australia and Cyprus‚ and 28-year-old Ramalepe‚ in her first contract abroad‚ view as a shop window.

“I’m very happy with the move even though it was supposed to happen earlier‚ in March‚” Mulaudzi said as both Dinamo’s new players addressed an online press conference of the SA Football Journalists Association.

“I think now I just have to continue from where I left off in the national league in SA [for champions Mamelodi Sundowns]‚ where I think I had a good season.

“Now it’s a new chapter where I think I have to work harder so that I can play‚ and then also be able to get offers from different teams. And also achieve more as a player so that when I decide to retire I know that I played my part.”

Mulaudzi and Ramalepe signing in Belarus followed five new contracts in a 10-day period of Banyana players in July‚ on the back of the national team’s first Fifa Women’s World Cup appearance in France last year.

They join a third Banyana player‚ Bambanani Mbane‚ at Dinamo. The 30-year-old centreback beat the lockdown to travel to Belarus in February‚ and she was able to greet her national teammates at the club who top the PWL‚ challenging six-time in succession champions and capital city neighbours FC Minsk for the title.

“I’m overwhelmed because this move happened so fast – I didn’t think it was going to happen any time soon‚” Ramalepe said.

“But since I’ve been here I’ve been quickly settled‚ and I’m enjoying everything that’s been happening.

“It’s been a long wait‚ because after the World Cup there were rumours that Chelsea were interested. I just told myself I needed to be patient‚ and eventually it happened.

“It was supposed to have happened maybe in late March. But the pandemic delayed the process until we managed to get the flight at a later stage last month to find ourselves here in Belarus where we are joining teammate Bambanani Mbane.

“She is going to show us the ropes and everything of how things are done and how the culture is here.

“We need to finish up this league and make sure we qualify for next season’s Champions League.

“I just need to work my butt off‚ and make sure that after this contract is done hopefully I’m going to secure something after‚ and explore and learn more as a player.

“This is my beginning and it doesn’t have to be my end.”

Belarus’s football has continued as President Alexander Lukashenko – “Europe’s last dictator”‚ who is seeking his sixth term in office since attaining power in 1994‚ in Sunday’s election – declined to go into lockdown in response to Covid-19.