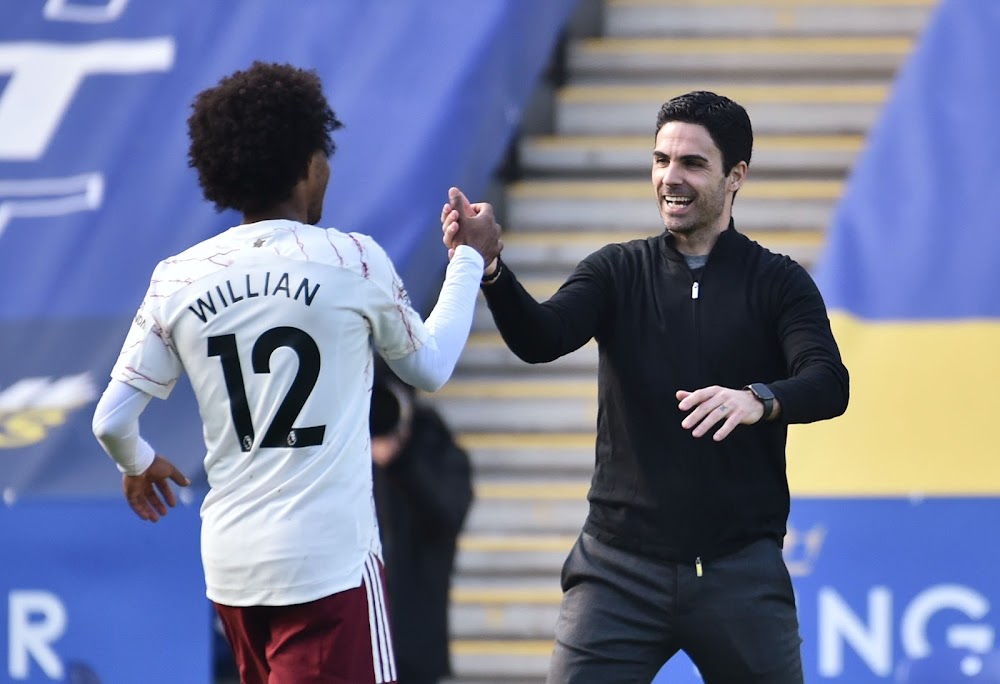 Arsenal manager Mikel Arteta said he expected senior players who stood out in a 3-1 win over Leicester City to keep up the good work in the club's bid to secure European competition next season and keep advancing in this term's Uefa Europa League.

The Gunners fought back from a goal down to beat the Foxes on Sunday three days after producing an equally impressive comeback in a 3-2 home defeat of Benfica in the Europa League, which secured a 4-3 aggregate win.

Arsenal fell behind at Leicester to an early Youri Tielemans goal but stormed back through David Luiz, Alexandre Lacazette and Nicolas Pepe, with Braziian midfielder Willian also putting in a superb individual performance.

"I am really proud of the team and the character that we showed," Arteta told BT Sport.

"A disappointing start again as we conceded an early goal but we looked composed and overall I think we deserved to win.

"The senior players are the ones who have to drive the boat forward and the young players can add something, but it can't be the other way around.

"They have to take that leadership and be accountable when they are in the team."

With a top-six finish in the Premier League back in sight, Arteta urged his team to push on after making six changes to the side that beat Benfica and stressed squad rotation was aimed at rewarding the players for their hard work.

"You can use any words to motivate players but at the end of the day you have to be in the field and I am so pleased that even though we made a lot of changes we were able to produce this result," he said.

"It’s not that we have to rotate. I want to rotate because I want to give that chance to the players, they deserve it for how they turn up every day."

Arteta also singled out Pepe who was a menace all afternoon and said ninth-placed Arsenal still needed to meet their high standards in the league.

"Nicolas Pepe has been really consistent and this is what we want from him," the Spaniard told the BBC.

"It's unacceptable the position we are in. We have to improve this dramatically and the only way we can do that is to win games."