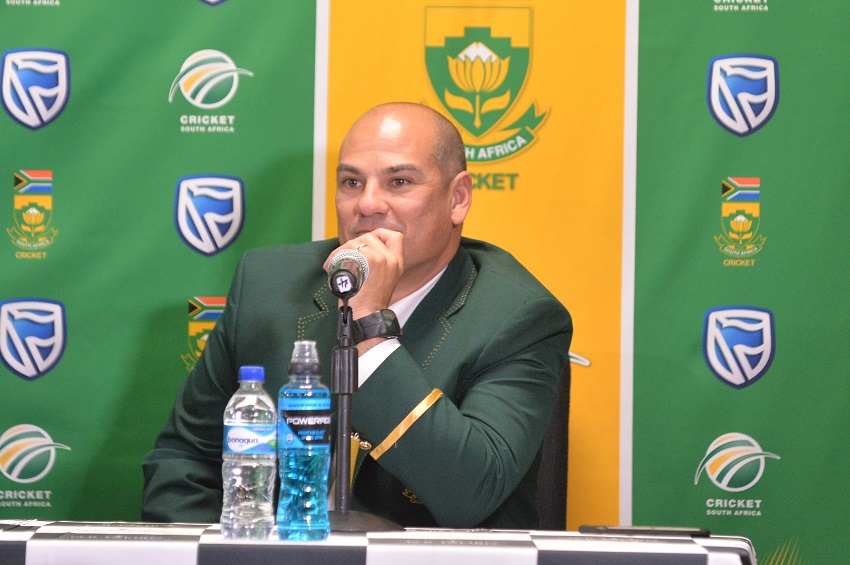 AfriForum’s manager of sport Ronald Peters was at pains to explain why there was a particular emphasis on the playing credentials of former Proteas coach Russell Domingo and former national convenor of selectors Linda Zondi in the organisation’s report into political interference at Cricket South Africa.

AfriForum’s manager of sport Ronald Peters was at pains to explain why there was a particular emphasis on the playing credentials of former Proteas coach Russell Domingo and former national convenor of selectors Linda Zondi in the organisation’s report into political interference at Cricket South Africa.

The 30-page report that was released on Wednesday highlighted Domingo’s lack of first-class playing experience‚ while also zeroing in on the fact that Zondi only played three first-class matches.

Domingo‚ who coached the Warriors in their most successful spell 10 years ago when they won two domestic limited overs trophies while also talking part in the now-defunct Champions League‚ became the Proteas assistant coach in 2011. He then replaced Gary Kirsten as national team coach in 2013‚ a position Domingo held until 2017 where he was replaced by Ottis Gibson.

Zondi‚ a former South Africa Under-19 representative‚ worked his way through the KwaZulu-Natal Cricket selectorial structures before moving into the national ones. He played a critical role in the development and selection of players like Lungi Ngidi‚ Kagiso Rabada and Aiden Markram.

Peters said credit for winning trophies should be directed at the players and not the coaches‚ while also questioning whether their race had something to do with their appointment.

“For us to say a coach is successful or is the best at domestic level due to the fact he won competitions can’t be true. He’s not winning the competitions; the players who are playing for him are doing so.

“Can it mean that he’s a successful coach? Yes it can. But to measure his abilities on winning trophies can’t be a true reflection‚” Peters said.

“We’re focusing on the enforcement of certain racial quotas and that stretches from players‚ to coaches and administrators. The question is not the fact he did not have the ability. The question was‚ was this forced or was it open at the end of the day?

“We’re arguing that there’s no place for racially forced decisions in sport and these decisions should be taken on merit.

“AfriForum’s aim isn’t to prove that this or that coach or player did or didn’t deserve to be in the national team. Our aim is to show the systemic problem of political interference that is reigning over South African cricket that creates the environment for these types of questions.”

While the report’s central theme tackles quotas and how the organisation felt they have detrimentally impacted the sport‚ the political interference that’s at the centre of the organisation’s debate isn’t adequately explained‚ nor was it fully fleshed out while also lacking key non-transformation flashpoints that have pocket-marked SA cricket.

The report‚ which also lent heavily on multiple news reports‚ also didn’t provide any remedies as to how the transformation question could be adequately answered‚ with only meritocracy being at the heart of the cure.

Cricket South Africa and the Department of Sports‚ Arts and Culture did not form part of the report‚ with legal representative Daniel Eloff from Hurter Spies Inc having said CSA would get their right of response when an opportunity is provided to them by the International Cricket Council.

The Kolpak exodus was also a major theme of the report‚ with Peters saying the flight of players to the United Kingdom was linked to political interference. Of the 22 Kolpak players mentioned in the report‚ there was only one black mention in Charl Langeveldt while there were five black players who took up Kolpak contracts.

The report was also devoid of the particular playing factors that some players were in at the time of taking up Kolpak contracts‚ what the lay of the cricket land was like when they left and whether they came back to play for the national team.

Jacques Rudolph‚ Ryan McLaren and Paul Harris were three players mentioned in the report from a Kolpak perspective‚ but there was nothing by way of fact that they came back and played for the national team with varying degrees of success.

“With regards to Kolpak‚ we have to take note that players gave up their eligibility to represent the national team‚” Peters said.

“It’s difficult to say where some of those players were in form and national team reckoning at the time because of the racial policies in place. How would we know where they would have been if these policies weren’t in place?”