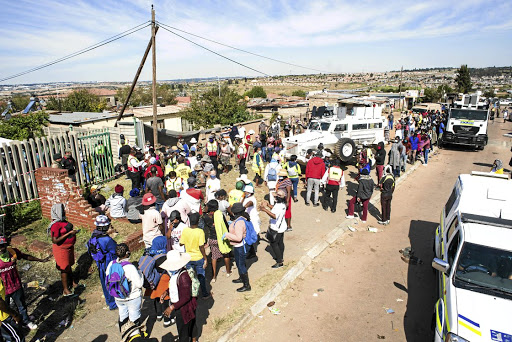 The Solidarity Fund is ramping up efforts to bring relief to those who have lost their income and those who have been affected by the coronavirus pandemic.

The loss of employment and livelihood for many has prompted the fund to earmark R175m for phase 2 of its food relief programme as well as a R100m support package to be disbursed through one-off food vouchers.

The intervention was announced on Friday by the head of the humanitarian pillar of the fund, Wendy Tlou. She said the renewed efforts were in the final stages of planning.

“The beneficiaries will include unemployed young people, expectant mothers, women and foreign nationals who are not classified as asylum seekers or refugees in terms of SA’s Immigration Act,” she said.

The fund also allocated R50m towards curbing gender-based violence (GBV). A total of R17m had been allocated to organisations that support victims.

“Based on a rigorous needs analysis aimed at ensuring the largest possible impact of its contribution, the fund partnered with the GBV command centre, the national shelter movement and the Thuthuzela Care Centres.”

Tlou said a further R75m would be used to distribute one-off R2,000 farming input vouchers to 35,000 beneficiaries engaged in subsistence or household farming in rural areas in all provinces.

“The farming input vouchers are to assist subsistence-focused smallholder and household/micro farmers who have lost income from a combination of sources during Covid-19 restrictions. This has compromised their ability to fund their ongoing farming activities or prepare for the next farming cycle.

“By supporting their ongoing ability to produce food, this programme will provide these households with direct access to food and prevent them from being pushed into a poverty trap,” she said.

The households to benefit in the food relief programmes will be identified by organisations including the department of health's MomConnect platform, M4JAMs urban youth, Harambee Youth Employment Accelerator, National House of Traditional Leaders (NHTL),  SA Council of Churches, Zakah Fund, department of sports, arts and culture and the United Nations (UN) International Organisation for Migration.

Those expected to benefit from the farming input vouchers were expected to be identified by the NHTL and the Food and Agriculture Organisation of the UN, which works with community-based organisations.

The fund hopes the interventions will have an impact far beyond the pandemic.

“In the face of such immense need, the fund has focused its relief efforts on where it can make the biggest impact both immediately and beyond Covid-19. It is thanks to the generous support of the many donors to the Solidarity Fund that we are able to demonstrate unity in action and bring relief to many of the most vulnerable in our society who face economic hardship at this time,” said Tlou.